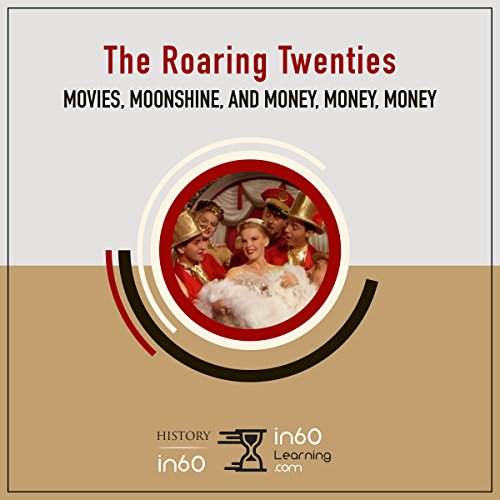 Smarter in sixty minutes. Get smarter in just 60 minutes with in60Learning. Concise and elegantly written non-fiction books and audiobooks help you learn the core subject matter in 20% of the time that it takes to read a typical book. Life is short, so explore a multitude of fascinating historical, biographical, scientific, political, and financial topics in only an hour each.

Wealth, indulgence, and a Gatsby-like aesthetic: This is what comes to mind when one thinks of the Roaring Twenties. This revolutionary decade marked the end of the American Gilded Age, a period of sustained economic growth which led to a booming marketplace.

After World War I, Americans had more money to spend, and mass production rose to meet the emerging wealth. This was the era of Broadway and bootleggers, new cars and Al Capone, mass culture and money, money, money. However, it was also the prelude to the Great Depression.

Dive into this fascinating history of America’s Jazz Age to unveil the vulnerable underbelly of this time of great indulgence.

Once again, in60Learning has done a great job in giving the listener a 60 minute history lesson. This book reminded me of a lot of things that I probably learned years ago in a history class but had definitely forgotten!

As usual, history reminds us of how much we have changed, but also how much things are still the same. It was amazing to me how much modern times are like the 1920's as far as the political climate and the economy is concerned.

The narrator does a great job, but the speed is a little fast for easy listening. I realize that is because they are trying to cram so much into a very short time frame.

I will continue to grab these small historical bites as often as possible. Just the right length to give me some knowledge without boring the reader with a great number of facts. This is a quick way to see if you are interested in delving further into a subject without wasting a lot of time in case you aren't interested in it after all.

I was given a chance to listen to this Audible recording by in60Learning and chose to review it.

This was a very interesting overview of what made up the 1920's,from movies to cars.I enjoyed Russell Newtons narration.It was professional and pleasant to listen to.I was given this book by the narrator,author or publisher free for an honest review.

This books covers the 1920's decade. It highlights all that took place during this time. The 1920's is most known for the flappers and mobsters but there was so much more going on during this time. This book covers all aspects of the Roaring Twenties, from the one year depression to mass production to prohibition. The only complaint I have is that the narration by Russell Newton. He read the material at a quick pace. So much so, that I couldn't do much else and keep up with him. He has a nice and clear voice but just read too quickly. Once again, this book was a gift from in60Learning for the holidays and I am gladly leaving a review without request.