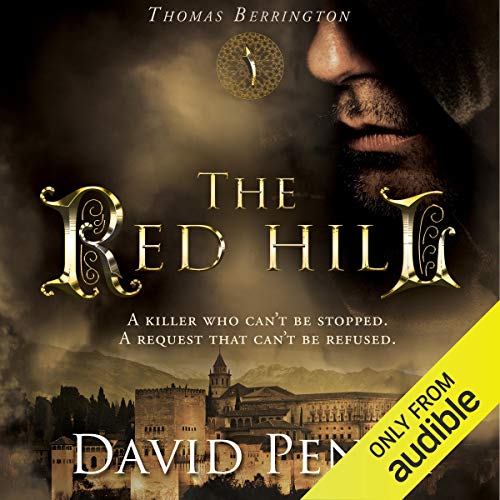 In 1482 the Englishman Thomas Berrington is living in the last remnants of Moorish Spain. A physician, he is an unwilling friend to the most powerful man in the kingdom. When bodies start to turn up, each showing the marks of a savage attack, Thomas is asked to investigate.

When one of the Sultan's wives is brutally murdered, what begins as a reluctant task turns into a fight for survival. Together with the eunuch Jorge, Thomas attempts to hunt down the killer before they become his next victims. Except nothing is as it seems - friends turn into enemies and enemies into friends.

Thomas's investigation lays bare the secrets of the Red Hill and the people who inhabit it. His discoveries culminate in a battle not only for his own life, but for the lives of those he loves.

Not my cup of tea!

I'm sorry, but the whole story seemed ridiculous to me. The narrator was quite good, but the whole thing reminded me of a low budget movie about Sultans, harems, slaves, sex, soldiers, etc., etc.! I barely made it all the way through.

Worth it for the second novel

First, Ian Russell's narration is excellent, as always. Very good character differentiation, including among female characters, not always a strength for male narrators.

As for the book, the first 2/3 is very good - solid characters with backstory, good flow, believable plot.

Then something goes kind of haywire, and the execution turns into kind of a mess. Repeated exposition, people running this way and that, unsupported decisions, changes in character definition to justify plot points (including a sudden memory glitch in a character who never would have forgotten such a thing). It was frustrating, because it wasn't necessary -- the evidence had been set up well. It felt like the editor quit part way through.

HOWEVER! I had inadvertently listened to the second book in this series, Bone Breaker, which was excellent, no such problems, very enjoyable (also narrated by Ian Russell). It would have been better if I had listened to this one first to understand the relationships... but I'm not sure I would have gone on to the next one if I'd started here.

So! Listen to The Red Hill, enjoy, suspend your disbelief through the messy bits, then move on to Bone Breaker, a real treat.

In 1482, Dr. Thomas Berrington, and Englishman, physician to the Sultan is asked to solve a crime. Berrington, having been ordered to make eunuchs of many of the Sultan’s servants, is assisted by Jorge, one of the eunuchs. This twisted tale of intrigue, murder, blood and guts has few redeeming qualities. The kingdom, ruled by the Sultan is full of harems of young girls, who have no control over their bodies or lives, jealous wives and cut-throat greed. I listened to the end, looking for some redemptive qualities, only to be disappointed. I love historical fiction, but the only good thing about this one was the narration.

Not to my liking.

What would have made The Red Hill better?

Did not listen long enough to know.

Would you ever listen to anything by David Penny again?

NO. Too much violence, bad language and sexual content.

What I heard was good.

Disappointment. Wish books had ratings. This would be an R.

I disliked the narrator intensely. Oddly stilted, ap it detracted from the story itself. Pity

Has The Red Hill turned you off from other books in this genre?

Did The Red Hill inspire you to do anything?

quit listening to the book

Our hero a dunce. Struggled to finish it. Reader had a pleasing voice, but wooden delivery.