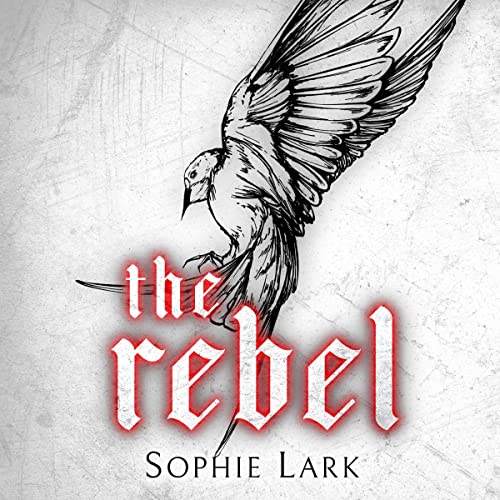 Zoe Romero is trapped in a marriage contract with the most sadistic psychopath at Kingmakers.

She couldn’t be more off limits. Stealing her from Rocco Prince would break the most ironclad rules of the mafia world.

I’ve got one chance to achieve the impossible....

Ohhhh, Miles...what happens when you mix my all-time favorite couple from Brutal Prince? You get 75 percent Aida’s recklessness plus 75 percent Callum’s ruthlessness, which equals 150 percent Miles. The Rebel is intense, driven, and doesn’t care what anybody thinks, until he meets Zoe. — Sophie

The Rebel is the second book in the epic dark mafia Kingmakers series. It’s a forbidden romance full of jealousy, desire, and a hero who will do anything to save the woman he loves.

Can I just say how much I love Miles in this story! He has so much depth & I love seeing all the layers.
Zoe & Cat both grow so much this year too!

Don’t miss this one…

I usually don’t care for protagonists being in school and I wa like maaaaaybe college isn’t so bad… we’ll, I’m glad I got in… I didn’t read the first book but I’ll be heading to the next one…

The characters had layers… I LOVED how the story included other characters that we would meet in the next book with the continuation if the story… that was really well done… no stupid conflicts to drive the story, everything made sense and was connected…

This book was a bit childish. Zoe was kind of lackluster in her attempts to do anything about her situation and it was hard to find it or the school they’re in interesting. Miles was alright as a character but the male narrator wasn’t great. He mispronounced so many words that I found it distracting.

One of my favorites from this series, Miles is so dreamy! I liked how the heroine wasn’t a total damsel in distress, she was so strong willed but ugh the way she fell for Miles made me smile. Everything about their romance was just so great and swoony. The plot had me on the edge of my seat and I really enjoyed the way the narrators performed the story. It kept me totally engaged into the world!

I really enjoyed this book!

I now just want a book about Miles and Zoe in LA, I feel like their adventures would.be so fun to read about

This is. a great book. This story has interesting characters and a great storyline. The narrators do a wonderful job telling the story. I'm loving this whole series.
#TheFlock

The second book the Heir series is so good. I'm just loving this series so far and getting other people perspective. Lilly, Jeffrey, and Maeve did an amazing job narrating this book!

Held my attention from the beginning

Yasss! Miles and Zoe were performed perfectly. The performers held my undivided attention in one sitting. It is a great book to get lost in. The love that these two characters share is obvious especially in the narrating. I felt the chemistry.

The Rebel is the second book in The Kingmaker’s series. It’s a mafia forbidden romance set in an Academia setting.

Miles and Zoe…. Sigh!! These two are GOALS!! Trapped in an arranged marriage deal, Zoe is terrified for the life that awaits her with Rocco after Kingmaker’s. Cruel and callous, Rocco sees Zoe as nothing more as a means to power.

Miles is The Rebel. Smart and savvy, he’s a businessman in the making stuck at Kingmaker’s due to his mafia family ties.

When Miles sees Zoe in distress, the sparks fly. Rescuing her he soon learns Zoe is more than she seems and he’s determined to protect her at all costs.

This story is narrated by Jeffrey Holz, Maeve York and Lilly Drake. They provide points of view for Miles, Zoe and Kat (Zoe’s sister).They do a fantastic job of bringing this story to life!

A solid book in the series, but wow does it setup book 3 so well!

The Rebel is the second book in Sophie Lark’s Kingmakers series and is a spin-off/2nd gen series from the couples of Brutal Birthright. Kingmakers Academy is a private college for children of mafia families from around the globe. It’s situated on an isolated island in the Adriatic Sea and once there the students are categorized into 4 houses so to speak: heirs, accountants, spies, and enforcers.

Zoe Romero has been in an arranged engagement with Rocco Prince for years after her stepmother set it up. And he’s the worst! Right before Zoe is to head off to Kingmakers Academy, her father decides her sister Catalina “Cat” is to join too. Now Zoe has to look out for herself around Rocco as well as keeping her sister Cat safe from his clutches. We get Zoe and Cat’s POVs as well as Miles Gallo’s (he’s the son of Callum & Aida Gallo).

This one I didn’t enjoy as much as book 1, as far as the romance goes. Like Miles and Zoe were fine, nothing wrong with them but nothing that super pulled me in. But Cat….omg, like once you see why her POV is included! 👀 I did like Miles and all of his business plans and investments, he easily makes money! Zoe also dabbled in writing, or she thinks it’s just dabbling or something she does until Miles takes a look at it and convinces her she could do so much more with it (scripts!). I did like seeing Miles and Zoe work together and offer advice to help one another out with their business ideas/future plans. Cat is warned early about Dean but also a bit intrigued by him (she has some very interesting moments with him, gets a glimpse of some things about his character that others don’t see). I am sooo ready for the next book! Random moments that stuck out: the up against the window moment 🔥😮‍💨, “the debt is paid” 😬, Miles making deals with Zoe’s dad.