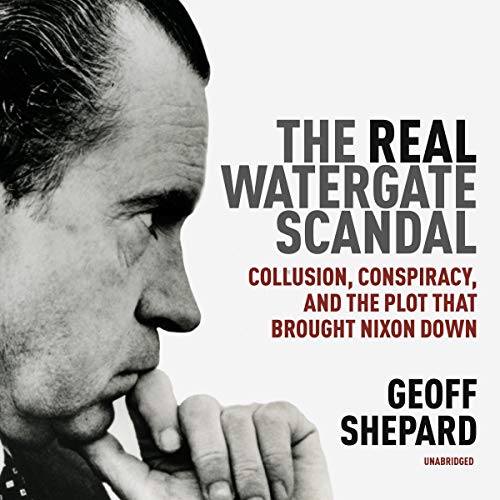 An aging judge about to step down. Aggressive prosecutors friendly with the judge. A disgraced president. A nation that had already made up its mind....

The Watergate trials were a legal mess - and now, with the discovery of new documents that reveal shocking misconduct by prosecutors and judges alike, former Nixon staffer Geoff Shepard has a convincing case that the wrongdoing of these history-making trials was actually a bigger scandal than the Watergate scandal itself.

Astonishing Abuse of the Rule of Law

I write this review from two fundamental perspectives. First, unlike Geoff Shepard, I am not an admirer of Richard Nixon. On the contrary, my opinion of Nixon, apart from Watergate, has diminished over the years. I do not think he was a great President, certainly not on domestic policy. Nixon's foreign policy achievements, in my estimation, are overstated. Second, like Shepard, I am a lawyer who has practiced for decades. My practice has mainly been in the area of civil litigation.

The rule of law is fundamental. It is what separates democracies and and true republics from dictatorships and banana republics. What it means is that we all exist under a stable set of rules enforced equally by the courts. The rule of law is key to protecting rights and avoiding anarchy. It is one reason why international companies invest heavily in America and why millions want to come to America.

The violations of the rule of law Shepard lays out with respect to the Watergate "cover-up" defendants are shocking to me, and should be shocking to anyone familiar with how the judicial system is supposed to work. Prosecutors and judges, particularly in the federal courts, are held to high standards. Judges are expected, at the very least, to play it down the middle.

One of the most well-established requirements of the judicial system is that ex parte conferences with a judge are not permitted. Ex parte means a meeting where one side is represented, but not the other. Under no circumstances is it permissible for a judge to meet alone with prosecutors to discuss how the case should be prosecuted or the merits of the case. The ex parte contacts by the prosecution (and others) with Judge Sirica outlined in the book are stunning and extremely disturbing. Further, the full extent of the violations will never be known because the meetings took place in secret. Those meetings, the occurrence of which (if not the substance) appear to be well-documented, were a violation of the ethical rules applicable to lawyers and judges.

Shepard outlines other concerns that are almost equally troubling. There may well have been a failure to turn over exculpatory evidence. Witnesses may have been manipulated. The Special Prosecutor's office was politically staffed. It is all nasty stuff, for sure. The behavior of the D.C. Circuit Court of Appeals is also highly questionable. It is pretty unbelievable that key decisions rendered en banc (by the entire court instead of a panel) were decided by terse per curium (unsigned) opinions. A lot of these issues are probably a little obtuse to the general reader, but, trust me, as a lawyer they are disturbing.

I do not think Shepard makes quite as convincing a case for rehabilitating Haldeman, Erlichman, Mitchell and, ultimately, Nixon. Shepard makes a decent case that an unbiased court--particularly if the abuses had come to light--might well have reversed the convictions of Haldeman, Erlichman and Mitchell on procedural grounds (Nixon had been pardoned by President Ford). If they were retried in an unbiased court, would they have been acquitted? I think that's a much more difficult lift and drifts into speculation.

At the end of the day, many will probably say, "so what? It's all history and they were bad guys anyway." But that's the point: The rule of law is there to protect everyone, including bad guys. Abuses should not be condoned, even decades later.

The Best Watergate Book yet

This book is not a detailed account of the crimes of Watergate, as there are plenty of books already in print that address that aspect of the scandal. Instead, this book explores the tainted legal process which cast a shadow on the "break-in" trial and the "cover-up" trial which followed.

Mr. Shepard throws conventional wisdom regarding Watergate on its head and argues forcefully that Nixon and his top aides were victims of judicial and prosecutorial overreach. As a member of the Nixon White House for the entirety of its existence, Mr. Shepard speaks with a very believable first-hand perspective.

This book is chock full of new information. I have listened to it three times already and still find new details I missed before. The narration by Chris Abell is outstanding. I highly recommend.

Horrible book with ridiculous conspiracy theories! I couldn't keep listening until the end. I do not recommend

I chose this book because I knew very little about Nixon. The author is undeniably biased and the book has some pretty complicated political and legal concepts along with a large list of people to track and I had a hard time keeping up. But if nothing else, I've learned quite a few things that I can appreciate about Nixon.

Could not finish it

Author attempts to explain away all the charges of corruption by anyone in the Nixon White House (except John Dean). All the prosecutors and judicial participants are accused of collusion and using/ignoring evidence in order to get rid of Nixon. After a while I just could not listen to it any more.

Listen with a judgemental ear.

This books skates over a lot of facts. I was appalled to hear in the dedication Nixon's plane was ordered to be wired, but when I looked up the facts, I was once again appalled with Nixon.
Why didn't the author talk about the Nixon plan, that was successful, to stall peace talks in Vietnam for Nixon's election chances? Wiretapping Nixon sounds like it was in the publics interest. What Nixon's campaign did is considered treason in most countries.

Dont waste your time and money!

This book sounds like it is written by Nixon's publicist rather than someone who was trying to tell the story of Watergate. All the author has done was defend Nixon due to his hero worship of Nixon.

A whiny, technical argument attempting to absolve Nixon and his senior aides of guilt in the Watergate cover-up. Not worth a listen.

I think for many this is a great read/listen, however as an experienced attorney, the author is very technical in his argument and for me this left me a little lost. The perspective is great and generally I learned a lot, but heaps of jargon and a better listen for those with a legal background.