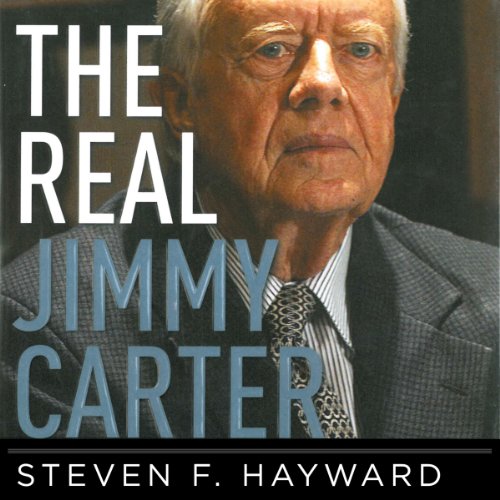 Jimmy Carter may have won the Nobel Peace Prize, but that's nothing to be smug about, as The Real Jimmy Carter: How Our Worst Ex-President Undermines American Foreign Policy, Coddles Dictators and Created the Party of Clinton and Kerry sets out to prove. Penned by conservative pundit Steven F. Hayward and tersely narrated by J. Arthur Tripp, the book makes the case that Carter's golden reputation is nothing but hagiography of the so-called "peanut president". Carter's list of crimes is not short: working against Reagan's anti-communist rhetoric, sabotaging the Gulf War, and playing friendly with Yasser Arafat and North Korea are but a few of his failures. In this passionate call-to-arms, Hayward may make you change your mind about "Saint Jimmy".

Jimmy Carter: America's best ex-president? Only if you're not bothered by the resurgence of Islamic fundamentalist terrorism (which started on his watch), the shamefaced foreign policy of Bill Clinton and John Kerry (ditto), and think that ex-presidents should travel the world coddling dictators and bad-mouthing America la Jesse Jackson. Jimmy Carter has been given a free ride from the liberal media, liberal historians, and even the American people, who excuse his political delinquencies and disasters on the grounds that he is a "good" man.

But as bank robber Willie Sutton said of Carter: "I've never seen a bigger confidence man in my life, and I've been around some of the best in the business." It's time to set the record straight. Finally, an honest historian Steven F. Hayward, author of The Age of Reagan demolishes the myth of "Saint" Jimmy and exposes how he created today's leftist Democratic party of John Kerry and Hillary Clinton. Jimmy Carter's laundry list of failures aren't just accidents of history: They're rooted in Carter's deeply flawed character and ideology - a smugly pious arrogance matched with a profound distrust of America. The Real Jimmy Carter reveals:

The Real Jimmy Carter is a shocker, showing why the peanut president should never have left his farm.

Hate the the voice of Arthur Trip!

He sounds like a brat on the playground! I'm a conservative but this guys voice gets on my nerves! I should have listened to the sample; learned my lesson!

This book is not for the intellectually curious.

I made it as far as I could in this "non-fiction" work. I was looking for a genuine critique of Carter's policies, legacies, and philosophy, and what I got was a right wing justification of the war in Iraq and shallow criticisms of liberalism. One of the main points made against Carter was his smile, when it should have been the effects that his policies had in Central America or the Middle East.

I've worked with former SS agents who've given me the stinky cheese from JFK to GW. Carter truly is a narcissist and a buffoon.

A great book about a horrible president.

This book will keep you interested from start to finish. Thank God he was a one term president. Unfortunately, his meddling and anti American activities have continued in the decades since he left office.