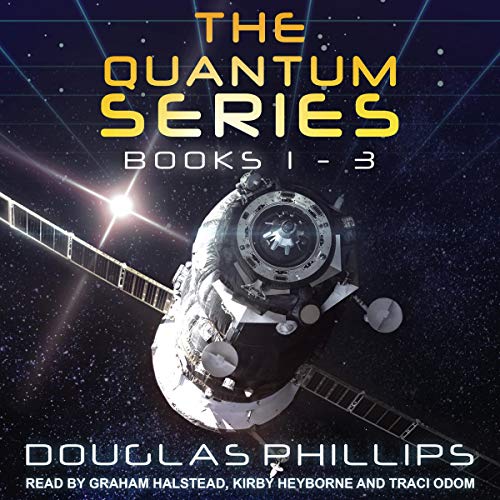 Forget everything you know about reality. The quantum world doesn't play by those rules.

But Daniel's intellectual strength is sorely tested by the bizarre realities he finds in the quantum world. Extra dimensions of space trap the unwary, probability replaces cause and effect, and time isn't what anyone imagined. The other side of the mirror is a place full of dangers, but it's also somewhere a dedicated scientist can uncover secrets that connect humans with something greater.

This is a rare - non dystopic - view of science and the future, Filled with adventure, suspense, brilliantly imaginative plots and much more - wow! great female characters with agency! Loved the characters (male an female) and each of the stories. Its very difficult to find Sci-Fi that doesn't present an awful future, this book does the best I've seen thusfar and it does it believably.
The author also does a very nice job of presenting his premisses at the end of each book and explaining what in the story is science and what is fiction (imaginative, creative, plausible!). This was an extra feature I enjoyed. Overall a very fun read - I recommend highly!

Yep this one has a ton of science along with good explanation of the possible. A worthy read. At times it gets a little bogged down in the science but when the explanations complete the story moves well into the future. Very good performance by the speakers/readers. Looking forward to more audible entries from this author and narrators.

I enjoyed some of the concepts being introduced by each of the Quantum Series novels. But I found the writing to be distractingly bad.

The behavior of some the characters was occasionally ridiculous, sometimes to the degree of satire. Several male characters repeatedly said and did things that made me cringe. The female characters were worse, being portrayed as either mildly hysterical or fawning over the male lead. Frankly, it came across as if the author rarely interacts with women on a professional basis.

Though I was able to suspend my disbelief enough to imagine travel between higher dimensional space, I couldn’t suspend my belief about the dialog. I kept thinking to myself, “Real people don’t act like that”. This is even taking into consideration the eccentricities often found among people in STEM.

The most jarring thing for me was what I can only assume is the author’s issues with women. He kept describing the attractiveness of several of the women, and by the third novel I noticed that the targets of those assessments tended to be people of differing ethnicities from the male lead. It started to sound a little like when white men fetishize “exotic” women.

I tried to ignore the problematic gender issues, a skill learned while being an avid reader of early 20th century science fiction. However, the beginning of Quantum Time focused heavily on the perspective of the male lead, who was previously the main source of these “opinions”. This included a scene describing his Haitian-American girlfriend’s nude body very early on the book.

I eventually just gave up and never finished the third book. The need to keep reminding the reader that the male lead was regularly having sex rapidly moved from silly to somewhat annoying. I kept wanting the author to just go ahead and write whatever gratuitous sex scene he had in his head so that he could move on to the actual plot.

The other aspect of the novels that was distracting to me was the random inclusion of social commentary. It wasn’t the content of that commentary, but the unnatural pauses in the story to explain them. It reminded me of conversations I’ve had with baby boomers after they’ve learned about some cultural or historical information that is totally foreign to them, but is common knowledge to most people. Usually it would result in the sidetracking of another topic with, “Oh! Did you know...” in a tone of either excitement or incredulity.

In summary, I really like the framework for the stories. The author clearly has an understanding of the science portion of the writing. He just needs to work on the fiction part.

Yes, there was a reason why this was on sale.

If you want a constant drumbeat of social justice messages, then you've found the motherlode. Science fiction? Not much.

really well written, great story, accessible explanations of hard science, and is a near future sci fi that touches the far future. its fun, it makes you think, its not superficial or vapid, and runs a good balance between the fanciful and the potentials in fiction.

I took a chance on this 3 book series because hey over 30 hours for 1 credit?! I’ve been burned before by this logic but was pleasantly surprised. This is well thought out, interesting, good plots and pacing, reasonable characters and good use of quantum physicists. The authors commentary at the end of each book is also worth the time. Overall: highly recommended!

This book listens like your favorite high school physics professor... Which also means if you didn't like science, you are not going to become enthralled by this journey. Also - If you are the latter, please do not vote. No more Kardashians presidents please.
Who is really going to like these books? Those who like to stretch their understanding of the incredible world we live in... imagine the possible and probable - who dream what could be rather than what has been. Douglas does a great job laying out an entertaining story based on science, which allows the listener to contextualize the laws which govern our existence. This is hard... real hard. It's much easier to skip the science and fall back on the "general" mechanics people can see, feel or have previously seen on screens. He does a great job! The end of the books when he reviews the real science - fabulous!
All that said, book 3 story is a little wonky - not based on the time travel, but the entire dynamics between some of the characters. People simply do not act this way. Kooky religious guy - yes. Scientist - yup. Politicians - you bet. Girlfriend that learns you were fishing in a different pond - a huge bag of nope. This was the only aspect of all three stories that I found to be truly unbelievable fiction:)
If I had a billion dollars, I'd team up with him to figure out how we can best educate the world, because he would definitely make it fun - giving us our best chance at turning the tide of tribal ignorance into a vision for the future.
If you are unsure - you should give these books a try,
Reason I gave 4 stars for performance is the narrators changed through the series. All were good, but it's a pain to learn 3 different narrator rhythms and voices. Also, the first book sounded very robotic. Could have been a bad download, When I speed the replay to 1.1x, it sounded better.

Lovers of Hard Science Fiction: Do Not Miss This

This was without a doubt the best hard science fiction series I have ever read. Phillips does a fantastic job of making complex scientific and mathematical concepts like string theory, quantum mechanics, quantum time, and higher dimensional space accessible to the lay reader. Do not miss this series if you are a fan of hard science fiction

Stop after the first book!

As I completed the first book I was ready to rate this a 5/5. Good hard science fiction that does a great job of explaining complex scientific theories in an entertaining story.

Just a few minutes into the second book my opinion of the series dropped dramatically. Intelligent scientists suddenly began behaving like idiots and by the time I got to the third book it devolved into some incel romance novel where the brilliant and heroic women in the first book turn into simpering love interests, nobody seems to be able to remember any of the discoveries that they made in the previous books, and everyone seems to be astonished by things that have already been explained in previous books. I couldn’t finish it.