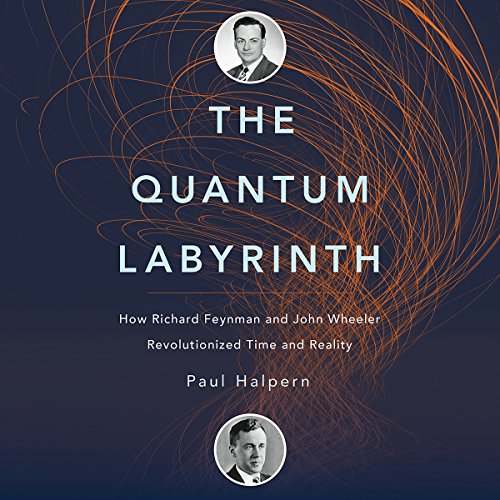 In 1939, Richard Feynman, a brilliant graduate of MIT, arrived in John Wheeler's Princeton office to report for duty as his teaching assistant. A lifelong friendship and enormously productive collaboration was born, despite sharp differences in personality. The soft-spoken Wheeler, though conservative in appearance, was a raging nonconformist full of wild ideas about the universe. The boisterous Feynman was a cautious physicist who believed only what could be tested. Yet they were complementary spirits.

Their collaboration led to a complete rethinking of the nature of time and reality. It enabled Feynman to show how quantum reality is a combination of alternative, contradictory possibilities and inspired Wheeler to develop his landmark concept of wormholes, portals to the future and past. Together, Feynman and Wheeler made sure that quantum physics would never be the same again.

"Readers soon see that Feynman achieved his breakthroughs in physics by collaborating with his mentor, John Wheeler.... With the same clarity that has attracted readers to Einstein's Dice and Schrödinger's Cat and his other books of popular science, Halpern retraces the way this unlikely pair smashed traditional understandings of time...a compelling reminder that even the most triumphant science comes from vulnerable humans." ( Booklist)
"Go to any physics meeting and ask each person there for their list of the top ten most influential physicists of the 20th century. Lots of different names will appear, but everybody will name Einstein (of course!). Nearly all will mention Feynman and Wheeler, too. After [listening to] Halpern's thought-provoking book, you'll understand why." (Paul J. Nahin, Professor Emeritus of Electrical Engineering at University of New Hampshire and author of In Praise of Simple Physics)

A biography of two mad geniuses

This is a book about John Wheeler and his apprentice and equally extraordinary physicist Richard Feynman. I story of friendship, escapades, and truly world changing discoveries in physics that span over half a century.

Always a Richard Feynman fan for his extravagance and crazy ideas, little did I know that his mentor John Archibald Wheeler was the crazy one when it came to ideas. His students mentioned throughout the book list a who's who in the particle physics world.

Although this book focuses on the two. It is a snippet of history post Niels Bohr, and Albert Einstein and the discovery of the quantum world. The new comers can be considered the second generation of particle physicists and the discovery of QED, the relevance of the Arrow of Time, the theories they developed trying to understand particle physics beyond the observable, and the barriers to the unknown.

The is mostly a story of people, not maths and equations, something I always liked. I'm sure books will continue to be written about them for a long time to go. Extraordinary people that where only human, enjoyable especially for a non scientist.

Neither Fish Nor Fowl

This disappointing work has an odd premise, that simultaneous biographies of an important physicist (Wheeler) and his even more important graduate student (Feynman), whose professional lives largely diverged after their relatively brief collaboration, would provide an effective framework for telling the story of 20th century physics. The result falls flat, at least for me. It is neither a convincing biography of Wheeler or Feynman alone, nor a terribly interesting account of their relationship (which seems not to have been of paramount importance for either man). Neither is it an effective account of the relevant developments in physics, which has been told better by a number of other authors. If there is a labyrinth here, it is the one the author got stuck in writing this book.

Great and informative overview of the intertwining lives of two renown physicists, as well as their interactions with their contemporaries. Puts a lot of subjects within quantum physics into context, and gives reason to how these subjects emerged. Excellent for the curious reader with an intermediate/beginner's understanding of physics; for others, they may find it a little long. The performance is top notch and ther book will speckle technical thoughts with humorous historical notes to keep the reader engaged. Overall, very enjoyable.

reveals the human side of quantum mechanics

it's a real interesting story of two scientist s that made great contributions to quantum mechanics, it reveals also how close to each other were the scientist s that developed this field. Bohr, eistein, Pauli

Started this journey with A Brief History in Time, and although I am by no means a physicist, the compelling insight into the fathomless brought about by this book, with it's cadence and saavy side notes, sometimes very technical, more than I can possibly completely understand, yet it remains a great read every word.

Incredible history of Wheeler and Feynman

This book is a long overdue celebration of two of the world's most important physicists, John Wheeler and his student Richard Feynman. Every once in a while, there is a pairing so dynamic that a wealth of downstream reactions occur. The fortuitous pairing of Wheeler and Feynman was just such a pair. When these two minds got together and began a partnership that would last the rest of their lives, they became jointly obsessed with figuring out how the universe works. Using Einstein's theory of relativity as their guide, these two scientists went on to explain the world of quantum physics and, in so doing, changing the very way our species came to understand the universe in which we live. Their contributions to our knowledge base, as a whole, cannot be overstated. It is about time someone wrote this book, to collect in one place exactly what their contributions were. It would be impossible to read a book about quantum physics and not read about the work of either Wheeler or Feynman. However, to my knowledge, this is the first book that exclusively focused on what their knowledge union brought to the world.

It would take a book of my own to merely highlight the contributions that both Wheeler and Feynman provided the world of physics, but here are a few things you will read about when you get around to reading this extremely worthwhile book:

First and foremost, both physicists were visual thinkers and always made a habit of drawing out, in very simple terms, what they wanted to teach. I had known about Feynman's teaching methods that gave rise to the famous Feynman diagrams. Few people are unaware that Feynman's drawings changed the way we understood and exchange of particles on the smallest level we know of. I had not known, until reading this book, that it was Wheeler who often started his lectures and informal discussion with drawings. It was Wheeler who set Feynman on the path of making diagrams a staple in his teaching and thinking.

At the time Wheeler and Feynman were figuring out and explaining the strong and weak forces, they were thought to be the "meson force" because physicists thought protons were held together by the exchanged mesons. I love when I get a detailed glimpse into the evolution of thought. Halpern did a really nice job of explaining how the meson force evolved into the understanding that quarks were held together by the strong force, which involves gluons holding the quarks together. They discovered that the strong force only works at very short distances, the distance of the nucleus. Related, they came to understand the weak force was what allowed that same nucleus to come apart (e.g. the nuclear fission that occurs in the center of Earth). They did this, of course, by drawing out many different possible isotopes of uranium. When Wheeler drew out 235, the energy curve (barrier) was very low, which meant slower moving neutrons could bring about fission. Eureka!

One of my favorite sections involved Wheeler trying to better understand Compton scattering. Wheeler proclaimed, "Everything is scattering!" (This made me love him more than I can possibly put into words). Basically he loved that electrons eat light. If you shine light on an electron, the electron gains energy from ingesting the light. Subsequently, the photon of light loses energy. This means that when a high energy, fast moving wave of light (photon), it emerges (after being ingested by the electron) as a longer, less energetic wave of light (photon). Every single time researchers have tested this, the wavelength shift always matches the energy gained by the electron. This, to me, is one of the most beautiful things in all of nature. To read about Wheelers obsession with it was truly the highlight of this book for me. If I could travel back in time to different time periods, I would leap through the evolution of thought involving the photoelectric effect/ Compton scattering as the great minds of physicists throughout the ages came to understand this phenomenon. I would leap from the lunchroom table of Max Planck, to the outside tables frequented by Einstein when he would talk to Besso, to the lunch discussions of Compton and Wheeler and Wheeler and Feynman. To me, this was one of the most exciting shifts in understanding from Newtonian physics to quantum physics. Imagine being able to understand the quantum world, in a way no one had ever understood it before, simply by figuring out that you could measure the length of light waves, a real physical thing that gave you unexpected information about the laws of physics. HOW THRILLING!

Halpern recounted some experiments of physicists who made discoveries before and around the same time as Wheeler and Feynman (e.g. Ernest Rutherford's construction of the first linear accelerator, Einstein's relativity and Einstein Rosen bridge (which Wheeler termed a wormhole, and so much more)

Halpern excelled when it came to highlighting the more personal aspects of both Wheeler and Feynman's lives. He exquisitely captured their relationship with one another as well as their individual relationships with others. Pairing the personal narrative of both men and discussing their achievements made this an A+ book!
#tagsgiving #sweepstakes #Quantum

I’ve read other works about Feynman, which were perhaps more complete, but this is certainly a good addition. I’ve always respected Wheelers work but never read his bio. I found this to be a good one. Other reviewers have implied that their relationship represented in this book is too contrived. I disagree. They had a lifelong relationship that is worth noting. Overall I recommend it, even if you read other similar works.

This was a great account of both the development of physics during the 1900's, but also the environment it happened in. The author masterfully described complex phenomena through storytelling and often assisted the listeners understanding by intertwining the struggles the scientists went through. This is by no means a primer on Physics, but a sweet spot for the recreational physicist.

This is an appreciative history of Feynman and Wheeler's development of Quantum Electro-Dynamics and other topics.

A historic overview some times cements our interest in subjects. The insight given surrounding these magnificent men of science is inspiring. Although I have an interest in physics this book makes me want to match the drive they had.

nice personal anecdotes of scientists and facts of natural science. pleasant read. no need to have advanced knowledge in the field to enjoy it.