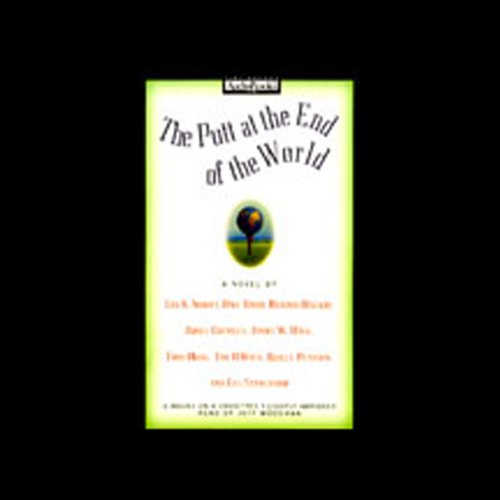 The Putt at the end of the World

The Putt at the end of the World

Sex. Money. International terrorism. And, of course, the ultimate question- Can a compact backswing save the world? A clubhouseful of acclaimed authors pass the baton (or at least the six-iron) to creat an ensemble tour de force of suspense, romance, and hilarity on the links. Golf is not a team sport. But who says fiction can't be? Get ready. Alfonzo Zamora is the venerable Mexican Senior player who's just discovered he's going blind. Billy Sprague is the country club pro with a swing as elegant as an eagle flight- except when money's on the line. Rita Shughnessy is the hard-drinking, hard-loving, hard-luck golfer on the women's pro tour. All three receive an invitation from mulltibillionaire Phillip Bates, founder of Macrodyne Software. To inaugurate his dazzling new course in Scotland. Bates is spending millions to host a tournament starring the superpro trio. The gala will welcome world leaders in the name of global peace and the universal language of golf. The weekend volley will attract a long scorecard of wild and unanticipated guests, including the world's most elusive environmental terrorist, a caddish pro who can't pass the Rorschard test, a sexy male-female counterterrorist team who keep driving into traps of their own making, a certain naked golfer making a bid for his hole in one, and enough plastique to end the world as we know it . . . And in an apocalyptic final play that will determine the fate of the world, ecoterrorists will converge on the course for an explosive putt to end all putts. The "Good Walk" has never been more fun!
Chapter One, Deep Rough, Copyright ©2000 by Les Standiford, Chapter Two, Blasting Out, Copyright ©2000 by Ridley Pearson, Chapter Three, Hang Up on the Lip, Copyright ©2000 by Tami Hoag, Chapter Four, Never Up, Never In, Copyright ©2000 by Lee K. Abbott, Chapter Five, Tight Lies, Copyright ©2000 by Tim O'Brien, Chapter Six, Immovable Obstructions, Copyright ©2000 by Richard Bausch, Chapter Seven, Free Drop, Copyright ©2000 by Dave Barry, Chapter Eight, Digital Pronation, Copyright ©2000 by james W. Hall, Chapter Nine, Right into the Heart of the Cup, Copyright ©2000 by Hames Crumley, Epilogue, Curse of the Nineteenth Hole, Copyright ©2000 by Anonymous