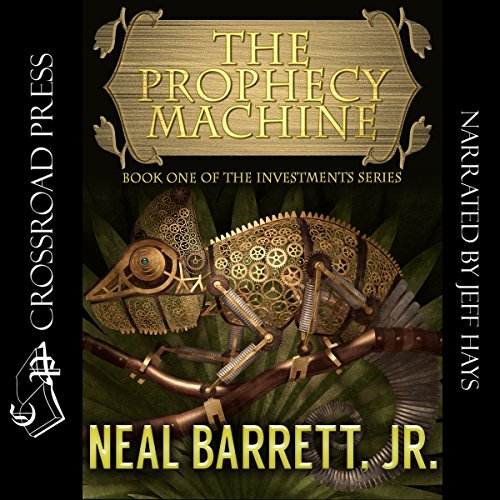 Even in a mystical world where centuries ago animals were magically changed into humans, the land of Makasar is considered strange. Its two major religions are Hatters and Hooters. During the day, Hatters, wearing hats of course, wander about jabbing pointy sticks into bystanders. The night is ruled by the Hooters, who hoot and set fire to people and things. Hospitality is considered a capital crime. And Newlies, the humanized animals, are treated lower than scum. So when Finn, the Master Lizard Maker, finds himself stranded in Makasar - along with his lover, an attractive Newlies named Letitia, and the grandest, most magical creation of his illustrious career, a talking, thinking, rather cantankerous mechanical lizard named Julia Jessica Slagg - his first thought is a quick exit.

But the Nuccis - strongman son, mad father, and ever madder grandfather - have other plans for Finn and his loyal companions. There's an odd machine in their basement that needs fixing, and who better to do it than a Master Lizard Maker? There's more here than meets the eye, however, and Finn soon realizes that the future he faces could be very dark indeed.

If you like lovely worldbuilding ideas, this book won't disappoint you. Neal Barret's world has humans, newlies (which are humanoids magically transformed from animals 300 years ago), and Julia Jessica Slag, who is a lizard made of copper - and by far the most sane creature in this story :D

Apropo, characters. Finn the inventor is self-absorbed and puffed-up, Letitia is well behaved but always hungry, Nucci senior is a looney, the good doctor is untrustworthy and the chair merchant tops it all off by being absurdly obnoxious :D In other words, I love them. They are all flawed on such a spectacular level, you can't help but like them :D


My heartfelt thanks to the author, narrator, or publisher for providing me this audiobook via Audiobook Boom at no cost in exchange for my unbiased review.

What made the experience of listening to The Prophecy Machine the most enjoyable?

Jeff Hays' voice is sublime. Listening to him is like being sponge cake and having cream being poured all over you, absorbing it's essence into your soul.

What other book might you compare The Prophecy Machine to and why?

There is really nothing comparable I've read to this book. The characters, locations, and scenes are at the level of Alice in Wonderland-ish craziness. The author has a vivid imagination and his gift is bringing it successfully to the page.

The scene that drew me into the book like a hooked fish was when Finn was fighting Sabatino over the treatment of a Newlie servant.

This audio book was gifted to me by narrator at no cost in exchange for an unbiased review via Audiobook Boom.

Where do I start. Trying to figure out if this is Steampunk, Comedy, Insanity, Fantasy or just plain good. Neal Barrett Jr. has been around for a while and this is the first one of his for me. I quite enjoyed all the nonsense and goings on in the land of Makasar. Only certain people can drink at a bar. Only certain people can drink at a tavern. This drives Finn crazy for a while until he figures it all out.

All I can say about this book is you have to read it to get what is going on. In a lot of ways, it reminds me of the Xanth series with all the sayings and stuff.

“The Prophesy Machine” is the first book in the Investments Series written by Neal Barrett Jr. and narrated by Jeff Hays. It is a rather light-hearted and somewhat unique steampunk adventure revolving around a couple on vacation who gets left on the shores of a country with strange people having even stranger customs. The country has multiple religious’ factions ruling during various times of the day and night. The one thing both of these religious groups can agree on is the horrid and deadly sin of hospitality. Things start to quickly do awry when the two main characters, and their mechanical lizard, ask a shopkeeper for a place to stay. If this all sounds interesting, continue reading to learn more.

The book opens with the couple destine for a different vacation location, however due to circumstances they find themselves dropped off in this very strange country. The story itself is well written and the prose was one that I rather liked. There was action, adventure, and audacious activity throughout the book. The author did a good job of bringing you into the story through his ability to describe the scene and characters without being overly narrative. Although the book contained magic, maidens, monsters, machines and a little mayhem, I liked the unique characters along with their backgrounds which did not fit into the standard fantasy or science fiction works I have previously read. I believe this to be my first book where one of the main characters was a pet mechanical lizard; what could go wrong?

Most of the action during the book takes place in a home that when described by the author reminded me of the Adams Family having its own servant; Squeen. The couple spends some time with a local family that is best described as dysfunctional and at worst completely crazy. We witness a son that acts oddly, a father that is even odder than the son, and a grandfather who is over the top irrational. Each of these brings a level of chaos to the couple who just wants to go home. For them this will be a unforgettable trip.

I liked the way Fin’s emotions were expressed, consisting often of two word saying such as “Rocks and Socks!”, etc. It got to the point where I was often wondering what words the author would blend together next. Although the author did a good job of writing a light-hearted book, there are very few areas that may make the book not suitable for young adult readers. There are a few scenes of rather descriptive and graphic violence. Not something one would witness in a book or movie such as “Lord of the Rings”; heads being severed, etc. Secondly, I believe there were two places where vulgar language was used. This was subtle and did not stand out or used excessively like other books in its genre. Thirdly, the book did contain some sexual over and undertones often through expressions of affection or desire for another character. Teenagers and above, I believe, would enjoy this book.

As stated earlier, the narrator of the audiobook version is by Jeff Hays. Mr. Hays currently has over fifty titles he has narrated on Audible and I always see his performances rated either four or five stars. He is one of the most consistent narrators I have come across and one can quickly tell that he has a passion to produce professional material and to get this to the public who might otherwise not read it. Jeff is skilled at telling a story and also knows the power of leveraging audio effects in ways that draws his listeners deeper into the story.

Mr. Hays continues to astonish me with his ability to voice the many different characters in the book and not make them sounds the same or like other characters he has voiced in other books. He again hits a homerun narrating both male and female voices in this story. The audio quality is also what I have come to expect from him. It is clear, pure, and top-notch. As if it were done by a professional recording studio.

A book including galleons, gears, guns, and gadgets made my reading enjoyable and fun. It should be noted that this is the first in a series of what I believe is a two-part work. However, one could complete this book and not feel there were open story lines needing to be addressed, no cliff hangers requiring a second book. The author did include the words, “To be continued…” at the conclusion of the book. So, if you are interested in the additional activities of this couple, pick up the second book to find out.

The Prophecy Machine
The Investments Series, Book 1
By: Neal Barrett Jr.
This was one weird book! Very imaginative and I loved the basic idea but it was hard to follow at times. The strange names for things weren't really explained well. I wish it had been because part of it I might have liked. Other parts not so much. A steampunk world but brutal and strange!
I did enjoy the great narration. Too bad the book didn't match the narration!
I received this from freeaudiblecodes. I saw the narrator and knew the narration would be good and that's half the battle.