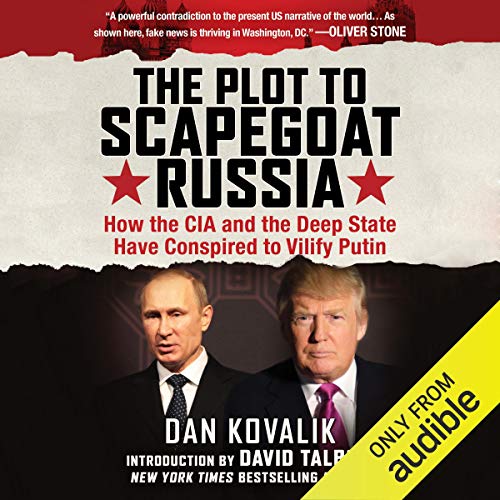 The Plot to Scapegoat Russia

An in-depth look at the decades-long effort to escalate hostilities with Russia and what it portends for the future.

Since 1945, the US has justified numerous wars, interventions, and military build-ups based on the pretext of the Russian Red Menace, even after the Soviet Union collapsed at the end of 1991 and Russia stopped being Red. In fact, the two biggest post-war American conflicts, the Korean and Vietnam wars, were not, as has been frequently claimed, about stopping Soviet aggression or even influence, but about maintaining old colonial relationships. Similarly, many lesser interventions and conflicts, such as those in Latin America, were also based upon an alleged Soviet threat, which was greatly overblown or nonexistent. And now the specter of a Russian Menace has been raised again in the wake of Donald Trump's election.

The Plot to Scapegoat Russia examines the recent proliferation of stories, usually sourced from American state actors, blaming and manipulating the threat of Russia, and the long history of which this episode is but the latest chapter. It will show listeners two key things: (1) the ways in which the United States has needlessly provoked Russia, especially after the collapse of the USSR, thereby squandering hopes for peace and cooperation; and (2) how Americans have lost out from this missed opportunity, and from decades of conflicts based upon false premises. These revelations, amongst other, make The Plot to Scapegoat Russia one of the timeliest listens of 2017.

What did you love best about The Plot to Scapegoat Russia?

An excellent analysis of “Russiagate” from a sadly underrepresented perspective. Kovalik looks the history of U.S. Russian relations from the Cold War to the present and how they have led to our current self destructive policies. His knowledge of the subject matter is extensive, but the book is written in an engaging conversational style that is never dry or dull. Probably my favorite book of 2017. Highly recommended!

Intelligent work, clearly shining a light on our own foreign policy misadventures and comparing them to Russia's modest foray into international affairs, which almost invariably have Russia's territorial integrity at the root of said foray. Ours, by comparison is nearly always motivated by financial gain, no matter the impact on the recipient of our 'beneficence', whether that beneficence take the form of political meddling or bombs. Both parties are held culpable and to account, and both attempt to blame Russia for their individual failings, and to bolster military spending. None of this failed to leave me incensed. Worth the time and money.

there is some really important history in this book but I can't in good faith widely recommend it because of all the disinfo. a few things that stand out: Gary Webb didn't shoot himself twice in the head to "commit suicide" -- this is the company line Kovalik unbelievably parrots; KSA and Israel are clients and in no way dictate American imperialism; and I was surprised that there was no elaboration on Russia as important energy source for the UK that does cause intra-imperial friction -- rather, both Talbot (who wrote the introduction) and Kovalik downplay Russia's command of resources to the point we're supposed to believe they're a rinky dink outpost that hasn't made leaps and bounds since the dismantling of the USSR. really weird. at least the author did a good job of explaining why the destruction of the USSR was a humanitarian disaster, but more importantly, it was a crime against humanity and he does satisfactory work of describing this loss and the damage done to the worldwide workers' struggle.

A heavy dose of sanity.

Kovalik is a very rational and intelligent man. I hope both US and RU intelligence read and think on this vital and necessary volume. I thought this was very well written. The narrator was well spoken.

The book is really well structured and provides vast array of information. I took upon myself to verify some of the facts related to South America and Haiti due the fact that I have colleagues from that part of the world. I was pleasantly surprised that people form the regions above confirmed, literally confirmed the events and the facts stated in the book. I am looking forward to the next book written by Dan Kovalik!

60's Radical. Your heard it before. Same mill, new grist. Tried and flase, worn down, worn down. No info.