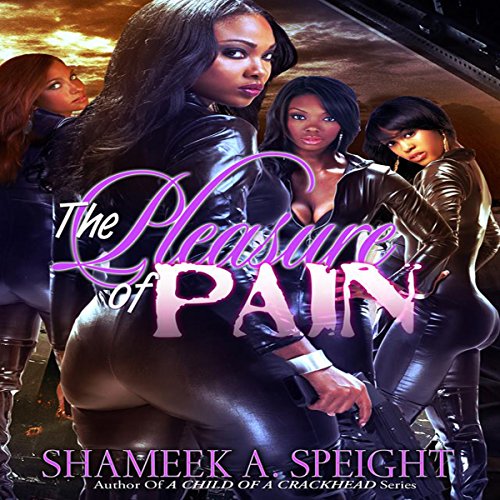 The Pleasure of Pain

In this twisted tale you will be introduced to Tess, Iris, Vanessa, Ebony and Bless who find out that The Pleasure of Pain is a true testament that we always want what we shouldn't have.

Tess is a strong determined business woman by the day and queen of the streets by night. She will stop at nothing to get the life she wants for herself and her three best friends along with her man, even if it means breaking old bonds and creating lifetime enemies. What she doesn't realize is in the game of cut- throat there are no rules.

Bless emerges on the scene after being recently released from prison only to find that things are not the way they were before he got locked up. The worst part is the person he has to fight is the person he least expected would betray him. He is out for blood and hell bent on destroying anyone who gets in his way.

Iris is secretly in love with Tess, but plays the friend card in order to get closer to her. She knows that Tess is in love with another man, however that doesn't stop her from plotting to get Tess' heart.

Vanessa and Ebony are sisters who share the same father and they happen to be Tess' top lieutenants. Their loyalty and love run deep for Tess and has never been questioned until now...

With pleasure there is always a little pain as Tess and her girlfriends will soon find out. Will they break under pressure or will they show why women rule the world?

i love this book. I wish it was a part 2 tho. I enjoyed everything about this story and what makes it better is if your a visual reader.

The Pleasure of Pain by: Shameek A. Speight

The Pleasure of Pain


I really don't know where to start. I'm not sure if I ever stated that I really don't read books about the drug game, it's not that I don't like them, I'm just not interested in them, but I'm branching out some and I have a few in my lineup to be read.

I have this novel in a Kindle format, and as an audiobook, from Audible.com. First the Kindle version, which I purchased on Sept. 10, 2012. I mentioned my purchased date because I have seen that this title now shows an update published date of: May 14, 2014. The reason why I'm pointing out the publication date is because the version, which I purchased back in 2012 was poorly formatted. This was why it took me some time to complete it. Once I learned there were an audio version of the novel, I ventured in once more. Ebooks are supposed to read just the same as its printed version, so they should look similar, even if they are not by their nature. -There should be no space between paragraphs, margins should be set properly and so on, and so on. This was not the case with this novel (he is far from alone with this problem, even I screwed it up first uploaded version, and haven't corrected it yet, but this isn't about me). So I hope the revised version cleaned up the mishaps and produced a better reading product.

There were many editing errors found throughout the novel. The audio version from Audible.com, narrated by: Mr. Gates, length: 3 hrs and 46 min., format: Unabridged, offered some help, but even with the audio version you can hear the errors, and formatting mistakes through the narration.

I heard a lot about this book and about the author, Shameek Speight, so I decided to download the book and see what all the fuss was about. I hate to say, I didn't see it. I won't take nothing away from the author. This man is selling more books than I am, but I just could not find what the rave was all about, which makes not question the author, I'm questioning the readers. Yeah think about that for a second. I know pretty covers will draw you in, and this 'Pleasure Series' covers are top notch.

The story moved fast, damn near too fast, which I think if the author would have eased up off the gas, the characters would have been better developed. The back story on the characters didn't really tell me who they were and why I should care for them. The character Bless was defined well, and I understood him. I got the story on the four ladies but there wasn't enough information there for to me develop a relationship with them, or to even care for them, and they really undergo some shit in this novel, but without a well defined back story it can weaken the development of the character and that is what happen here.

The novel was very predicable, if you're a mystery solver, you won't have any problems figuring out who betrayed the crew, and you won't have a problem figuring out who was going to die and who wasn't. Even thought I knew what was going to happen at the end of the novel, damn did I enjoy reading it! -I love action and drama and it played out like a movie in my head, and I liked that.

I have part two of the series, "The Pleasure of Pain 2" in my Kindle ebook collection already and I will read it, as well as part 3. I hope I will be able to deliver a better review. This novel I give 2 1/2 stars out of 5 stars.

I’m game for a lot but who needs this much negative. I’m open for sex. The rest is a waste.

Would you consider the audio edition of The Pleasure of Pain to be better than the print version?

Haven't read the physical book, however the book audio version was amazing.

What was one of the most memorable moments of The Pleasure of Pain?

his voice was great when speaking for bless

Who was the most memorable character of The Pleasure of Pain and why?

would love for you to have more books by this author on the Audible site. I would also like to have the option of reading the other books in this sequel. you could get an additional reader for the females and continue to use Mr. Gates I love his voice.

What made the experience of listening to The Pleasure of Pain the most enjoyable?

It was a PERFORMANCE, not just someone reading a book!

Would you recommend The Pleasure of Pain to your friends? Why or why not?

Yes but only because of the narrators!

Have you listened to any of Mr. Gates’s other performances before? How does this one compare?

I was fortunately able to listen to this via audio book because it was narrated by the most talented narrators I've ever heard! Listening to THE PLEASURE OF PAIN on audiobook was like attending a spectacular performance! The male and female narrators changed their voices to suit the characters they read for perfectly. Each was able to incorporate accents, pauses and emotion when appropriate. Plus, there were sound effects and music, making this a very unique audiobook.

Unfortunately, the reading material was not quite as impressive as those who were reading it. I did like some parts of the book there was nothing extra exciting or special about the story or the writing style. There were some things that were written that seemed ridiculous. For example, the male main character referred to his, "10 inch penis" for sure twice but maybe 3 different times. Also, the author mentioned that the female and male main characters had sex until they BOTH climaxed 5 times in one scene, BOTH climaxing 4 times in another. I know women can have multiple orgasms but I highly doubt that a young thug could have 5 orgasms in one brief sex session! The book was entertaining yet nothing out of this world. If I had read this and not listened to such a brilliant performance, I would have rated the book much lower.

Not My Kind of Book

This book is too much everything negative.

I'll stay away from these kind of books in the future.

I guess you cant trust no one. But friend or foe I'm not fussing or fighting over any man unless I got papers on him and years put in!! Maybe not even then. Lol

I could have done without the excessive sex scenes but other than th a t, not a bad book!