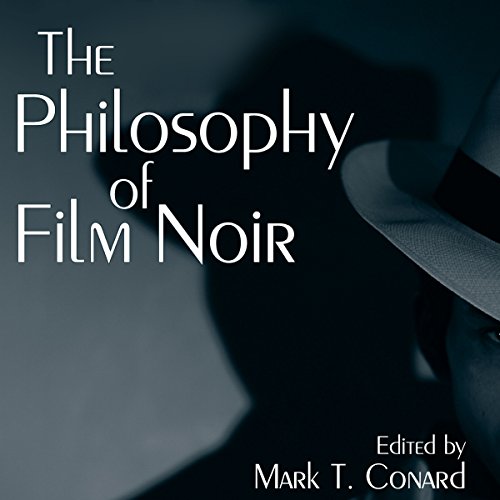 The Philosophy of Film Noir

Noir emerged as a prominent American film genre in the early 1940s, distinguishable by its use of unusual lighting, sinister plots, mysterious characters, and dark themes. From The Maltese Falcon (1941) to Touch of Evil (1958), films from this classic period reflect an atmosphere of corruption and social decay that attracted such accomplished directors as John Huston, Alfred Hitchcock, Billy Wilder, and Orson Welles. The Philosophy of Film Noir is the first volume to focus exclusively on the philosophical underpinnings of these iconic films. Opening with an examination of what constitutes noir cinema, the book interprets the philosophical elements consistently present in the films - themes such as moral ambiguity, reason versus passion, and pessimism. The contributors to the volume also argue that the essence and elements of noir have fundamentally influenced movies outside of the traditional noir period. Neo-noir films such as Pulp Fiction (1994), Fight Club (1999), and Memento (2000) have reintroduced the genre to a contemporary audience. As they assess the concepts present in individual films, the contributors also illuminate and explore the philosophical themes that surface in popular culture.

Not bad for a "Publish or Perish" thesis

Presents as a compilation of views regarding the basic tenets behind the Film Noir movement. I never had considered these things very much, viewing the film interpretations as validation of the Hard Boiled Mysteries which I relish. These chapters shine a light on the darker corners of the post-war attitudes of screenwiters, directors, and other Hollywood visionaries of the time, as well as the How and Why of their choices of novels to memorialize. The concepts of neo-noir still escape me, even after learning from this tome, but I doubt that it is the fault of this book. If you have an affinity for Noir and/or Hard Boiled Mysteries, you will benefit from this presentation.
Narrator Jack does his usual professional best with this. Advisory: When utilizing an academic performed by Narrator Jack, you will find it best to overview at 1.5x speed first, then at normal speed with pen/paper at the ready. This is the perfect way to learn, as his normal rate for these is VERY conducive to appropriate note taking, and unlike class lectures, you can overview first to minimize redundant note-taking.
I am thankful for this gift.

The Philosophy of Film Noir and Pop Culture

I absolutely loved this audiobook and that would likely be because I love film noir. This was a wonderful overview and look at how it became popular. This is a gem for any movie buff who enjoys the genre. Even if film noir isn't someone's favorite genre, I think the philosophy itself is interesting in every way. Definitely recommended.

Jack Chekijian narrates this audiobook with style and it goes well with the book. He makes this a winning combination of author/narrator. He speaks clearly and is one of my favorite narrators.

Audiobook received in exchange for an honest review.

I received this audio book in exchange for a honest and unbiased review. Noir became a genre back in the 1940's. This book discusses the genre, how it started & how it blossomed. This books discusses different titles, what the movies are about, plot twists some characters named, others not. Many of out classics fall in the category Noir. Noir means darkness, sinister plots, dark themes, mysterious characters and unusual lighting and so on. Some of the most famous Noir names is Alfred Hitchcock & Orson Welles.

The author, Mark T Conard, did a really good job explaining all the difference and informing us to how the movies are written, directed and the whys. He wrote the book in a way that not only made it interest, but also makes me wonder what I missed on some of the classics I haven't seen yet. The narrator, Jack Chekijian did a wonderful delivery in this book.Together, these two men have made me look at the classics in a whole new light.

This audiobook would be very interesting for anyone who is into film noir
I received a free copy from the narrator for my honest review.

Extremely in depth and detail focused. I think with the line of thinking this book subscribes to, you dive deeper than the film makers intended

Sure. Anyone curious about the origins and motivations behind the genre can get a lot of interesting theories about particular influences and what is meant by the term "film noir". Some essays are more interesting than others, and it gets a bit redundant at times, as might be expected. In general, a fairly diverse range of analysis, though.

If you’ve listened to books by Mark T. Conard before, how does this one compare?

No favorite, but the essay presenting The Jazz Singer (1927) as the first film noir was so narrowly focused on one particular aspect of a definition of the genre, that it actually served to undercut the claim. It was long-winded, as well. No loss if I'd skipped that one.

Was The Philosophy of Film Noir worth the listening time?

For the most part, yes. But, along with a few redundancies, some of the essays tended to spend a slightly more time than strictly necessary on scene-by-scene recounting of some of the film examples (The Jazz Singer, Pulp Fiction), and deconstruction of staging and dialogue (The Killers, The Maltese Falcon). Interesting if done in moderation, but perhaps a bit much here.