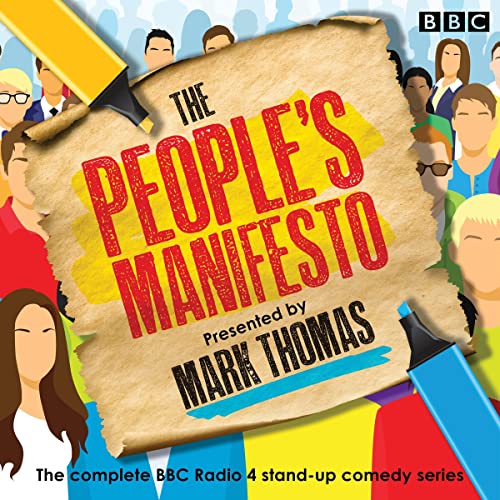 Comedian, activist and 'libertarian anarchist' Mark Thomas believes that, as a nation, we are drifting—economically, politically and socially. Where, he asks, are the big ideas, theories and visions that will help our country in its hour of need? Tired of the status quo, he sets out to change the world by compiling a People's Manifesto, gathering policy suggestions from his studio audience and getting them to vote for the best.

Their blue-sky proposals range from the serious (limit and regulate payday loan companies; force all politicians to use public transport, the NHS, and send their kids to state schools) to the hilarious (mandating that all restaurants should only serve starters; colour-coding society so you can see at a glance who's single and looking).

Other ideas up for the vote include legalising recreational drugs for senior citizens ('Deals on Wheels'); introducing a maximum wage; and reinstating 'Saint Monday'—the ancient tradition of taking Mondays off. Also on the agenda are crushing the cars of anyone illegally parked in a disabled space; declaring any war that lasts more than five years a draw; having a 'none of the above' option on voting cards; and enforcing rustle-free zones in cinemas (policed by 'cinema ninjas'.)

Inspired, Mark decides to pursue one of his favourite proposition—that he should invade Jersey—and heads to Glasgow to consider a kick-starter to buy Scotland out of the Union... But which of the Great British Public's policies will make the final cut? Listen and find out...

Also included is a bonus accompanying PDF of the full People's Manifesto, as voted for by the audience of Mark Thomas: The Manifesto.