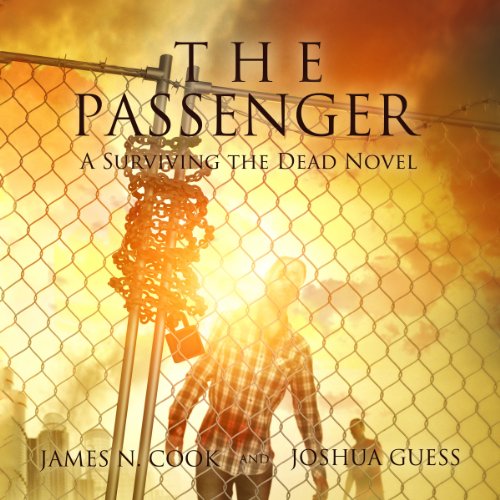 A single bite is all it takes.

During the Outbreak, like billions of others, a man finds himself infected with the Phage. Desperate to spare his family from watching him become a walking nightmare, he flees. Soon after, he is dead.

Two years later, he wakes up.

Not in the afterlife, but in his own body. Trapped, unable to control the monster that carries him, and forced to witness the horror of its existence.

A hundred miles away, Sergeant Ethan Thompson thinks he has seen the worst the apocalypse has to offer.

He is wrong. Following the trail of a dying madman, he will embark on a journey of vengeance that will test the limits of his sanity. Along the way, he will learn that there is no justice at the end of the world. There is only the living and the dead, and in between, there is The Passenger.

much better than expected!

without spoiling anything...a particular "eating" scene! that may sound gross, but i bet you by the time you finish listening to the story, you'll agree with me!


two really good stories in one! as the book opens, a family is fleeing a zombie horde. just as they reach the safety of the safe area's chain link fence, an accidental misplacement of a hand leads to the fingers being bitten off of the man's hand! after a few quick words to his family, he runs away, back into the oncoming horde, filled with the courage only a dying man can muster. jump ahead 2 years, and our unamed man's mind comes back to consciousness as he is eating his latest victim.

as our unamed zombie is recoiling mentally at what he can't stop doing, we meet ethan. he is the staff sergeant of delta team. delta team is one of the teams getting ready to board a train-like vehicle in order to take the fight to the insurgents. ethan's story tells us the state of the government and its fight against both the zombies and insurgents. our unamed zombie's story tells us what it's like to be a zombie and part of a horde.

individually, both stories are strong and could stand alone. as the overall story progresses, the stories begin to overlap and meld in an exciting, yet believable, way. for such a short story, the authors do a good job of building interesting characters.

the narration is excellent! each character's voice is varied and unique.

Good within the series or on its own

“The Passenger” is a great bridge story as part of the “Surviving the Dead” series. It doesn’t move the plot along, but it allows the reader to see some extra world in which this series takes place (and a few of the people who live in it). It’s told form a variety of viewpoints one of which is (implied by the title) a zombie. If you’re looking for a short-ish zombie novel this fun stand alone or with the series!

it will grab and hold your attention

What did you love best about The Passenger?

I enjoyed the view of life from a dead man's eyes. it was well written one would think there is only so much to be said about what a zombie does with its time but the authors pulled it off nicely.

that would be a spoiler but it was when the zombie finally got what he wanted.

no. it was a good book but for me it was really just a palate cleanser between bigger books I enjoyed it and will look up the authors for further work but it did not move me to tears. and its a zombie world there was not much to laugh at.

Fun to have a zombie apocalypse from the perspective of the zombie. Nothing special, but entertaining.

THE DAY SCRAPPED BY

You get the perspective of a Zombie, of a military grunt (way in the future, once the military and society in general have pretty much broken down.) and you get the perspective of a seventh grader. I was real disappointed in the Zombie, he had no control and was really just an observer of what his body was doing. If they could have made the Zombie more in control of his body, but have strong urges and the willingness to eat people this would have been so much better, something like Tufo's "Timothy". Although some gore was thrown in, for the most part, this sounded like a seventh grader wrote it. I got impatient after 8 chapters. I have been learning lately that just because a story has Zombies in it, does not make it exciting or interesting. You still need good writers.

The best so far

I almost skipped this book, I mean a credit for a 3.5 in a series couldn't be worth it. Overall the series has been a solid three stars but this? This is five, the characters are actually interesting, I cared about their stories, actually invested. Gabe and Eric are so two dimensional, but these characters were compelling to the point I'm writing my first book review.

thru the eyes of the newly undead...all thumbs up!

yes you devour the living, yes you were once living...gahhhhhh... now you're getting all nosey. I Am. Dead. I . Like . Zombies.

James Cook is my favorite author. Heck the guy actually takes the time to message people bavk on his Facebook page super cool guy. the series is the best I've ever heard I would rather listen to this series then watch anything on TV. James you freaking rock man can't wait for hellbreakers

Six hours for how much?

I'm not sure the storyline is worth it. Also seems funny to go so far out of the way not to use the 'zombie' word.

much better than expected

I found this audiobook to be much better than expected. well worth buying, although it's not part of the series.