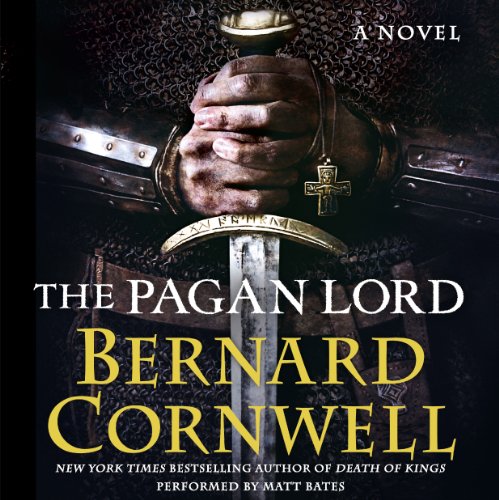 At the onset of the tenth century, England is in turmoil. Alfred the Great is dead and Edward his son reigns as king. Wessex survives but peace cannot hold: the Danes in the north, led by Viking Cnut Longsword, stand ready to invade and will never rest until the emerald crown is theirs.

Uhtred, once Alfred’s great warrior but now out of favor with the new king, must lead a band of outcasts north to recapture his old family home, that great Northumbrian fortress, Bebbanburg.

In The Pagan Lord, loyalties will be divided and men will fall, as every Saxon kingdom is drawn into the bloodiest battle yet with the Danes; a war which will decide the fate of every king, and the entire English nation.

Great Book, BUT, Not The End! Grrrr.. LOL

I love Bernard Cornwell's writing from the 'Sharpe' to 'Thomas of Hookton' to one of my favorite series, 'The Saxon Series' which 'The Pagan Lord' as I believed was to be the last of the chronicles of Uhtred & formation of the country we now know as England during the 900's. Without spoiling any significant parts of the book I'm also going to complain for a sentence or 2 regarding how & if this is truly the end of this particular series. I was expecting a relatively clear ending to this series with the start of the small nation that would slowly turn into a world power, play a pivotal role in creating the USA, & remain a world power to this day. But its safe to say that not all questions were answered & since I know nothing of English history there's no way to place when certain events occurred in the nations rise to prominence

Its safe to reveal without spoiling the book that in this book:

* Uhtreds character growth jumps significantly if you compare it to the last couple books in the series. It seemed that while reading the last couple books the battles & barriers facing our protagonist are hard to clearly delineate due to similarities. This is by no means negative talk about Cornwell because even Cornwells average battle scenes & plot twist are far better than other authors best written novels. Due to Uhtreds age (a bit over 50) has him realizing that if he wants to see his dreams coming to fruition it must happen soon. So the reader gets a look at a "new" Uhtred that is older, grumpier, but by no means any less dangerous

* The reader will also see character growth in all 3 sons he has, well, 2 sons & Alfreds bastard who he treats like a son. This dynamic & seeing his sons take an active role in this story may lead to believe that a continuation of this series to involve the carrying on of his wishes by his bloodline, BUT that is not clearly stated in either direction. The reader will see how each son reacts & evaluate their standing with their famous father

* Although there is predictability in the story there are also many plot twists to make it interested & listening... I finished this book in 2 days, easy... so even though its addictive it won't take 20 hours to finish the book

* There are many old faces of friends, enemies, or characters whose allegiances are never completely predictable

* Finally, you see his usual hatred for priests of Christianity intermixed with the love of his men & Aethelflaed on one side & his own possible personal gain on another, therefore making hard decisions with a mind that is matured but still burning for payback

The book is an easy listen but well worth the credit just to find out if he reaches his ultimate goals? I believe Cornwell will have another addition to add to this series & if so, no matter how annoyed I may be expecting a final outcome I will be pre-ordering the next installment as well. Say a prayer to Odin & hope the corpse-ripper drags his enemies down as he battles for love & hate .

If you could sum up The Pagan Lord in three words, what would they be?

What other book might you compare The Pagan Lord to and why?

Which character – as performed by Matt Bates – was your favorite?

This book will not evoke any strong emotion, unless you count the dozen times you will shout "holy sh*t!!" in a crowded coffee house.

But none of these narrators can hold a candle to Johnathan Keeble. Uhtred is a Viking and not an Englishman, so to hear an Englishmen voicing him is disappointing. Keeble was the PERFECT narrator and everyone else that has attempted has been subpar.

This is another great story from Bernard Cornwell. The main characters from the previous books in the series return and Uhtred, now older, is just as violent and blood thirsty as he ever was. Uhtred goes to Bebbanburg to claim his birthright and goes to war with Cnut. I ran through this book and in the end I was left wanting more. I hope we get more!

Mates Bates' narration was very capable and was a great improvement over the last book in the series.

Maybe there'll be author's notes in the next book?

I've read ALL of the Saxon Stories available as of 7/6/2015 and have loved every one!

But, there are a few problems:

Cornwell includes notes in his books at the very end. For some reason, the author's notes aren't read on the recording at the end of the book or, at least, not consistently! Can you really call the book "unabridged" at that point?! :)

Also, if you sail into a "fjord", it's pronounced "fih-YORD", If you fight Kjartan The Cruel and refer to him as "kih-JAR-tin" then you've successfully distracted me from my listening pleasure. I then stop listening and choose a few select words for the reader/performer, his engineer, the producer...all of you!

The next book comes out soon. Maybe there will be a change??

This series of books is excellent. I had read all of the previous books in print. This one was very good, but not at the level of the others in the series. Was it because of the audio format? Not sure. I didn't just commiserate quite as much with the travails of Uhtred in this one, but I still enjoyed it quite a bit.

“The Pagan Lord” is the 7th book in the Saxon Tales. It is important that you read this series in order or else you are totally lost. This book has been sitting in my wish list for almost a year and finally I have gotten around to reading it. I apologize, Mr. Cornwell for being so slow to read your most interesting book. This is an ongoing account of the creation of England. Cornwell does extensive research for his historical saga. As far as I am concerned he is the master of historical fiction.

The series is about King Alfred (871-899) who was uniting Wessex with the neighboring Kingdoms of Mercia, East Anglia, and North Umbria to fight the Viking marauders. Alfred wrote a set of laws to govern by and pushed Christianity on his people. In the last book King Alfred died and passed his title to his eldest son Edward. This book picks up about ten years later as Cnut Ranulfson; a Viking warlord is massing a formidable army. Our hero Uhtred of Bebbanburg, who is the narrator of the series, once again is called upon to fight the Danes. As usual Cornwell’s battle scenes are magnificent and his history accurate. This is a great way to learn English history. Matt Bates narrated the book. I wish the publisher would stay with the same narrator for the entire series. It seems this series has had a different narrator for each book.

Where does The Pagan Lord rank among all the audiobooks you’ve listened to so far?

What other book might you compare The Pagan Lord to and why?

Have you listened to any of Matt Bates’s other performances before? How does this one compare?

He was a new narrator for this series. He took a little while to warm up. But once he did, he was great.

Would you consider the audio edition of The Pagan Lord to be better than the print version?

Cornwall has done such a phenomenal job with this series, nut I was disappointed by the ending. After so much, Utred of Babenberg deserved a better ending.

can't wait for the next in the series

What made the experience of listening to The Pagan Lord the most enjoyable?

Uhtred is a warrior and a kind man. I like to hear his reactions to other less kind warriors and his distaste for them.

What does Matt Bates bring to the story that you wouldn’t experience if you just read the book?

A very talented narrator who holds my attention during passages about sailing, the look of the water, the wind, the lay of the land... things I pretty much skim over when I'm reading but really listened to as I heard this narrator.

I cried to think that this is the last book in the series. I laughed when I found out there's another book coming out in October 2014.