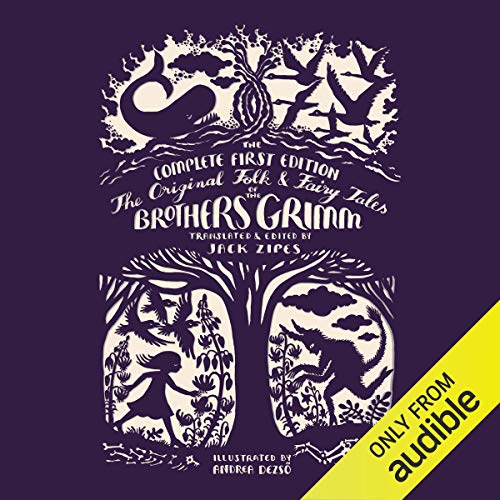 The Original Folk and Fairy Tales of the Brothers Grimm

When Jacob and Wilhelm Grimm published their Children's and Household Tales in 1812, followed by a second volume in 1815, they had no idea that such stories as "Rapunzel", "Hansel and Gretel", and "Cinderella" would become the most celebrated in the world. Yet few people today are familiar with the majority of tales from the two early volumes, since in the next four decades the Grimms would publish six other editions, each extensively revised in content and style. For the very first time, The Original Folk and Fairy Tales of the Brothers Grimm makes available in English all 156 stories from the 1812 and 1815 editions. These narrative gems, are newly translated and brought together in one beautiful audiobook. From "The Frog King" to "The Golden Key", wondrous worlds unfold - heroes and heroines are rewarded, weaker animals triumph over the strong, and simple bumpkins prove themselves not so simple after all. Esteemed fairy tale scholar Jack Zipes offers accessible translations that retain the spare description and engaging storytelling style of the originals. Indeed, this is what makes the tales from the 1812 and 1815 editions unique - they reflect diverse voices, rooted in oral traditions, that are absent from the Grimms' later, more embellished collections of tales. Zipes' introduction gives important historical context, and the book includes the Grimms' prefaces and notes. A delight to read, The Original Folk and Fairy Tales of the Brothers Grimm presents these peerless stories to a whole new generation of readers.

Great. Stories are quite funny. Reading is clear and very amusing to listen to.
I recommend

Very good. Here is a tracklist.

It's true that the narrators are a little bland, but they're not terrible. The translation, from 2014, claims to capture the spirit of the rough and direct original text. I don't read German, but comparing this translation to the one on my shelf by Margaret Hunt (originally published in 1884), this one is refreshing. As for the content of the tales themselves, that requires no review from me.

I made this list to paste into a note app on my phone for reference, as others have done with similar compilations from
Audible. Hopefully one day Audible will get to this title and give the chapters proper titles, but until that day, I hope this helps.

001. Introduction: Rediscovering the Original Tales of the Brothers Grimm
002. Note on the Text and Translation

Exactly What I Wanted

I wanted a bunch of fairy tales to listen to before bed, and that's what I got. I like the creepy and gory versions, so all the better.
It's an odd translation. Things that I'm used to hearing as rhymes don't rhyme, which is a little jarring. Also, there's a ridiculously long intro - 1:20hours - that you should just skip if all you want is to listen to fairy tales.
Aside from that, I find the original stories fascinating. Mixed in among the blood and horror I expected, there are also Christian fairy tales. They're not biblical, are written in the same style as the other stories in this collection, but with Mary, The Devil, etc.
Cassandra Campbell remains one of my favorite narrators. She does different voices, but they're not obnoxious like so many, and her narration style makes me picture a slightly wicked smile, which is perfect for this. Joel Richards is ok, though a little monotonous/robotic in this reading, and some of his diction is so sharp that it's a little distracting.

The brutal Germanic 1812 sources, not for children

Exceptionally well performed scholarly edition of the rare original 1812 (volume 1) and 1814 (volume 2) Grimm tales. includes a fascinating and thorough introduction that gives the history and rationale for these terse and authentic translations of uncut and un-sterlized folk tales. Subsequent Grimm editions that were edited, cut, revised, and Christianized all the way up until 1857 do not allow us to see so baldly and boldly the pagan brutality and simple morality and lack thereof in the folk traditions. Subsequent editions, for example, do not include the tale about the Children who Played at Slaughter: one boy slits the neck of his brother while the little sister catches the blood in a basin, just as they've seen done with pigs. The murderous boy goes free because he chose an apple rather than a gold coin at the "trial." If folk history and "morality" interests you, I highly recommend this edition. If you are looking for edifying moral tales for your children, after listening to the raw sources in this collection, you may lose your taste for exposing them to Grimm fairy tales at all, but certainly not to this edition. This edition is not for children, in my opinion.

One of the best things about the narration is that they switch chapter by chapter which, for this book, helps to mark the beginning and endings of the tales especially those with odd endings. This collection of stories is most definitely not the Disney versions of the tales but is the raw translation. Some of the stories are almost familiar but take a different path or end unexpectedly. It's more like the origins of the stories. Some of the tales feel very unfinished, others feel like they would only be truly understood in their own place and time. Enjoyable from a historical perspective.

Once upon a time when a stepmom was only a mom...

... and other well-known fairy-tale motifs were not yet invented, the Grimm brothers wrote down and published their first edition of household tales. Some of the stories were crueler and much less "politically correct" for its age than later editions of this well-known book.

Therefore, start listening if you dare to a sligthly different, though must interesting version of the stories we all came to love. Meet the real Cinderella, without a fairy godmother, very much like the new Dutch ballet with the same name. DIscover the material that has inspired many a Neil Gaiman story and uncover literary topoi and stock figures that gives you a better understanding of literature today.

Should you not care for any of the above and only want to hear some good stories, this remains a book not to be skipped. While some of the repetition of themes might seem boring at first, the fun starts when you compare and come to appreciate how the same story wondered in the world of people, but so often with a different cloak on. I think of the Swan Princess or was she actually a Crow Princess. Did Cinderella get her dresses from a nut or were they made by the birds? What does a story about Hansel and Gretel's own mothers' rejection of them tell us?

The book is read by Joel Richards and Cassandra Campbell. Their performance is quite good and easy to follow.

I strongly recommend the first edition of the classic tales of the brothers Grimm, translated for the first time in English. A must... if you want to live happily ever after!

Where Would We Be If Kings Didn’t Go Hunting?

Or nice fathers stopped marrying wicked stepmothers? Or princes were never turned into flounders? Or gnomes didn’t have the inside story on who you can and cannot trust?

I can tell you where we’d be: nice girls would never become queens, fishermen would never get palaces, heroes would perish at the hands of their own brothers and we wouldn’t have this collection. Having just listened to The Tale of Tales, Giambattista Basile’s rollicking collection of 50 folk and fairy tales strung together, Decameron-like, into a loose sort of uber-story, a comparison is hard to avoid. So here goes.

Unlike Basile, the Brothers give us no “frame narrative”; these stories seem to be grouped according to theme and subject (I’m only guessing; I skipped the hour-long intro after a snide reference to “naive morality”). Because folk tales use and reuse the same patterns, plots and archetypes, these 156 stories seem to merge into one story. So far from being a bad thing, it gives a powerful sense of common cultural unity, especially when the lineaments of a German tale remind you on one of Basile’s Italian products.

As evidenced from the catty remark about morality mentioned above, there are academics who make their living theorizing over folk tales, finding the sources for cultural dysfunction and inherent injustice. I just enjoyed (and continue to enjoy) these stories immensely. It is a treat to get the original (or at least closer to the original) versions of favorites like Cinderella and Hansel and Gretel, just to see what subsequent telling retained, cut out or added on. I always thought the collection of folk sources was a 20th Century phenomenon; those WPA-funded researchers who collected blues tunes from the deep South and dialects from Appalachia. Obviously, the Brothers were doing the same thing in Germany even as Napoleon was marching the Grande Armee to its doom in Russia and meeting his own at Waterloo. And, judging from the introductions they supplied for each volume, they cared deeply for the oral culture they were preserving.

As a consequence, we are much nearer the original sources than Disney ever dared to bring us. Expurgated in later editions, here, as with Basile, we confront the grimmer (no pun) details of life. “How Some Children Played at Slaughtering” is a blunt, straightforward little chiller (told in two versions). At the end of another tale, a malefactor is shut up in a barrel of boiling oil and poisonous snakes so, we are told, her death would be particularly awful. How that wasn’t particularly awful for the snakes we are not told. But you get the idea.

However, published almost 200 years after Basile, and in Germany, for all its lurid details the Brothers’ effort is essentially tamer in tone. The Neapolitan dialect, at least in Basile’s hands, was a vigorous, florid medium, chock full of hyperbole and insult, always seeming on the verge of slipping beyond the author’s control. Being German, the Brothers are far more staid. They don’t indulge in Basile’s thousand different, ingenious, charming ways of saying the moon rose. Or birds sang. Or people ate dinner. Here the moon simply rises, birds sing and people eat. I missed the clever circumlocutions and rapid-fire verbal invention of the Italian tales. Nor is there Basile’s emphasis on body parts and functions.

Like the style of the stories, the reading is less adventuresome as well. Tales are traded off between Joel Richards and Cassandra Campbell. Ms. Campbell tries harder, putting more animation into her readings, but overall the delivery is workmanlike rather than inspired.

THE most complete version by the Grimms

Alternating male and female narrators prevents distraction amoung the stories. Excellent narration technique.
Generally considered the best and most comprehensive publication by the Grimms.

It's interesting to hear the original fairy tales and to see how they have been modified for later audiences. These are much bloodier than the versions that my mother read to me at bedtime. How man saw himself in relation to supernatural forces is interesting, as well. Even the simplest man could outsmart magical beings.

And even the poorest, most destitute man could outsmart a princess! It is most disturbing to see how daughters were given so freely as gifts to men who performed tasks for her father. Women had the role of bargaining chips. What's love got to do with it? Apparently, nothing!

Not The Tales You Remember

These certainly are not the tales that have come down. These are the original versions of the folktales that the fairy tales evolved from. This is an excellent collection and the performance of the two narrators is very well done. Did not want this book to end.

Lots of different versions of one story.

I have to admit I was becoming tired of hearing the same story but slightly different over and over. But all in all, it was worth the read for the origins of the stories we all know and love.