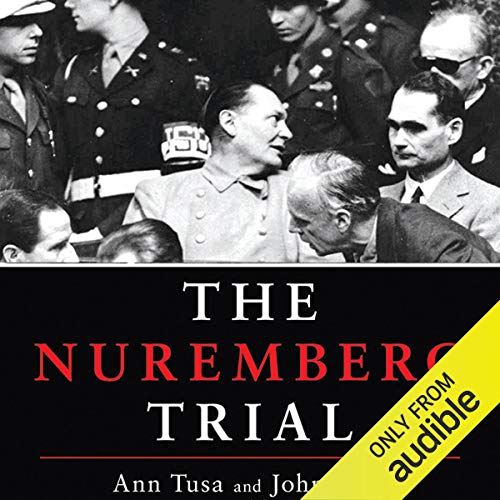 Courtroom dramas have always consumed the public's attention. There is a certain high-stakes drama that takes place in the halls of justice. Ann and John Tusa have collaborated to capture those emotions in their historical study of The Nuremberg Trial. The Nuremberg Trial isn't some bland textbook; the Tusas' personable narration delivers to listeners the countless personal stories at the heart of one of history's most infamous court battles. A deft performance by Ralph Cosham only serves to accentuate the care Ann and John Tusa have taken in relaying the facts of Nuremberg with humanity and insight.

Here is a gripping account of the major postwar trial of the Nazi hierarchy in World War II. The Nuremberg Trial brilliantly recreates the trial proceedings and offers a reasoned, often profound examination of the processes that created international law. From the whimpering of Kaltenbrunner and Ribbentrop on the stand to the icy coolness of Goering, each participant is vividly drawn.

“Fascinating… The Tusas’ book is one of the best accounts I have read.” ( The New York Times)

When I look for books on Audible, I check the reviews first, especially the negative ones. Usually those will highlight things which are immediate deal breakers. So let me start with the negatives first:
------
CONS

1) There's a level of background knowledge needed for this book.

The authors provide a sufficient summary of World War II, which of course sets the stage for the Nuremberg Trials. However, I feel that some questions may go unanswered if someone doesn't understand why the Soviet Union was hellbent on summary execution of the defendants, for example. The book stands well on its own, and the content is digestible, but I would be hesitant to recommend it to someone who isn't a fan of history.

2) Sometimes the book will get boring.

Although the Nuremberg Trials were just over 70 years ago, the subject matter is very politically sensitive. This, along with the fact that history is not always a drama or thriller, means that sometimes the book will resemble a college lecture. Some parts of political history have to be understood in full context, even if the context is rather dry. While the Nuremberg Trials had a lot of exciting drama, outbursts, and even humor, it was still a judicial case, which can at times be mind numbing. Narrator Ralph Cosham's performance does little to help this. While I feel he could have injected emotion and higher energy into the writing, that request becomes rather tricky when the subject matter includes one of the worst inhumane atrocities in the 20th century.
----
I don't see these two cons as deal breakers. I'd imagine anyone precisely looking for audiobooks on the Nuremberg Trials knows that a) even the most exciting historical events have highs and lows, and b) contextual understanding is paramount. For example, it would be impossible to understand China during the Mao Era if you didn't have sufficient understanding of western imperialism during the 1800s.


1) Dripping with detail and facts.

The Nuremberg Trials lasted an incredibly long time, and they were unprecedented in their scope, goals, and size. This book answered every last question I had on the subject, without becoming repetitious. Furthermore, it effectively introduced seemingly irrelevant information, and masterfully explained how it all fits into the bigger picture. When it came to describing the defendants, it was meticulously detailed. There's more than enough information on Hermann Göring's intelligence, cunning, wit, and sadism, or Rudolph Hess' ability to act mentally incompetent while having actual bouts of mental incompetence. The profiles of the defendants are some of the most interesting parts of the book.


2) The scope of this book is deceptive. On top of documenting the days of the trial, it discusses:

a) Should there even be a trial? Which countries wanted a speedy trial, a thorough trial, or just a show trial with a firing squad waiting outside?

b) How does one structure a trial which makes the defendants feel like they can represent themselves fairly, and negotiate more favorable terms of punishment?

c) How can the trial be ran without the defendants using it as a platform to criticize the allies for actions such as the Dresden or Tokyo firebombing, or nuclear weapons use in Hiroshima and Nagasaki?

d) How close was the trial to collapsing due to political infighting between France, U.S, U.K, USSR, and others?

e) How did the defendants react to the trial, their first night in prison, their sentence to death, or footage of war crimes in the court room?

f) How did lack of standing infrastructure, vehicles, materials, and resources hamper the setup and planning of the trial?

g) What was the public opinion of the trial in various countries such as Germany, France, the Soviet Union, or the UK?

All these questions, and any more, are covered wonderfully in the book. There's so much more to the subject that makes the Nuremberg Trails not just a court case, but a landmark historical event that has an effect on international law today.
----
I'm tired of writing. The book is a wild ride. Get it.

I found I needed to go back and read or listen again to other books to learn 'who is who'. And then do a Wikipedia search on the Trial and the Defendents.
(Shirer's Berlin Diary and Rise and Fall did convey the gut wrenching reactions of the time.)

Most interesting were the motivations of Judges and Lawyers involved compared to the Governments and politicians.

And to my thinking, a person only needs a genuine interest in the Second World War to find this book valuable.

Good because its so detailed

What other book might you compare The Nuremberg Trial to and why?

I listened to this book immediately after my 2nd trip through William L. Shirer's Rise and Fall of the Third Reich. It was a very good complement, picking up the story of the Nazis that survived the war. But make no mistake, while Shirer's book is a reasonably thorough history of German politics from 1920-1945 at roughly 57 hours, this book is packed with a huge amount of detail, clocking in at almost 26 hours and covering the events of barely a year.

I’m older and somewhat hard of hearing. I use Apple AirPod Bluetooth headphones which make books easy for me to listen to. I can’t understand the reader. It sounds like he has a mouth full of cotton. He doesn’t pronounce the consonants and it is all muddled together. Frustrated, I finally gave up listening to this book.

I really enjoyed this read of the trials of the century. It was a little slow at points for those who aren't too familiar with lawyer jargon but the sections dealing with the courtroom and the prosecuted was by far the best parts and kept the book flowing fairly well.

I loved this book. I aways wanted to know about the trial s and the audio book told me everything .

I expected this to be a laborious summary of the proof and arguments offered at trial. Instead, it offers a tremendous amount of insight regarding the issues, practical and legal, as well as behind the scenes. The performance is typically aristocratic English with only one criticism. Every proper name beginning with a consonant followed by a short vowel and found at the beginning of a sentence was subconsciously preceded by an audible “huh”. (Ex. huh-Jackson, huh-Maxwell-Fyfe, etc.)

One important way that I judge a book is by the garage factor. that's the amount of time I spend in the garage listening to it instead of going into the house to be with the family. I've really enjoyed getting into history books and have enjoyed many of them, but rarely do they have a very high garage factor. Until now.

While it occasionally gets mired in details, enough to let me mind wander, this book held my rapt attention for basically the entire runtime, and has inspired me to dive into a deep study of the trial and the principles behind it.

My biggest complaints is just that the narrator - while a master of pacing and inflection - has the extremely distracting habit of putting an "ah" sound in front of words that start with a consonant. occasionally just annoying, this tendency occasionally required a quick rewind because it could lead to misunderstandings. Overall, a relatively small complaint for such an enjoyable book.

Having just toured Nuremberg, I was excited to hear this account. With as much documentation the Tulas had at their disposal why did the write events like a laundry list? Instead of writing the dialogue they described in general terms what was said. It would have been much more dynamic. The narrator sounded like he was calling a golf match. The whole thing was awful. I skipped a lot hoping it would get better. Nope. Never did.