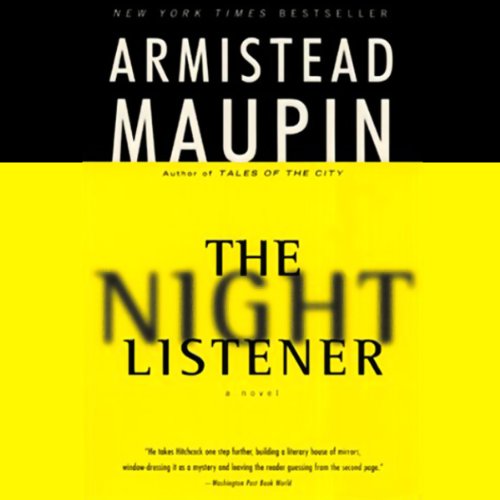 Few storytellers in America write with such unerring insight and honesty as Armistead Maupin. Now he has given us his most ambitious and daringly imaginative work, The Night Listener, a novel as spoken-word serial, including an original music score.

Gabriel Noone is a fabulist, a writer whose late-night radio tales have brought him into the homes of millions. In the midst of a painful, unwanted separation from his longtime love, Gabriel reads the extraordinary memoir of Pete Lomax, an ailing 13-year-old boy who suffered horrific abuse at the hands of his parents. Pete is not only a gifted diarist but also a devoted listener of Gabriel's show. And thus begins an extraordinary phone friendship.

This unprecedented audio project is as thought-provoking as it is mesmeric. The Night Listener is a meditation on the power of voices and the faith we place in them, and an extraordinary audio experience from an American literary icon.

"Filled with twists and turns that rival The Sixth Sense and The Crying Game, Maupin's new novel is a deceptively simple page-turner perfectly suited for the audio format....Not only is it a book that listeners will want to discuss with friends, but once finished and all is revealed, it's likely people will want to listen to it again with a fresh ear to hear the clues that have been planted along the way....Audio is the perfect medium for this born storyteller." (Publishers Weekly)

I almost gave up on Maupin after the bitterness of "Sure of You," but I decided to give the book a try. I'm so very happy that I did! This is classic Maupin in some ways: the bawdy humor, the soft irony, the sharply-drawn characters, some of whom will wring your heart.

The plot device of a story about telling a story, or of a storyteller explaining why he can't tell a story, may seem hackneyed, but in Maupin's hands, it becomes so much more than a cliche.

Maupin is a perfect narrator for this story ... something that you can't say for all authors who record their own audiobooks. DO NOT MISS THIS.

This is a brilliant, complex, touching, entertaining, inspiring and unfinished book. Interestingly, it is also not clear whether it is fact or fiction. I suspect that it is fact, which would also explain why it is so inconclusive: It peters out because the author himself simply doesn't know how it ends.

Even so, there is still something unsatisfying about the final product. The characters waver between the two- and three-dimensional and then plump down firmly on the side of the former. This is annoying, because it is amply clear that Maupin has it in him to make them not three- but multi-dimensional.

Somehow I just don't buy the literary artifice of the open ending. I have nothing against open endings, but this one doesn't wash. My suspicion is that Maupin got stuck or bored or bogged down and simply stopped being really committed to the project when he was around two thirds of the way through. This is where the book starts to dissolve and lose its initial promise, and the prose starts to read more like a chore than a pleasure.

I still wanted to give it five stars because of the magnificent way it started, but I finally decided on three for the book we actually have. The five-star book is there, and it is truly stunning, Maupin just needs to sit down and write it. If he wants to, of course...

This was a mesmerizing and fun book to listen to, even though I knew the basis of the story since I had watched the movie (starring Robin Williams) which is based on this novel. If you are an Audible listener, be sure to also listen to the New Yorker article regarding this book and the original Audible interview with Armistead Maupin regarding this novel, both of which should still be available for listening to via Audible.

The main character in the book, Gabe, unintentionally comes across as a total and complete rube. Which is unfortunate because the character of Gabe is so clearly based on the life and experiences of Amistead Maupin himself. I can't even imagine how Amistead could read this book aloud and not wonder at his own idiocy acted out through this character.

The story itself is a good idea, and starts out with great promise before the main character's stupidity is injected. (Now what I'm about to write may sound juvenile, but it's an accurate summary of the story.) At this point there are four unneeded hours of the main character acting out embarassing stupidity. Then somebody else comes along and says "hey! wow! you're stupid!" or something along those lines and the main character spends two audio-book hour in denial that he is stupid. Then the main character decides to run out to prove to himself that he is indeed stupid. Mission accomplished.

I have to say I regret purchasing this as an audiobook. I'm sure as a standard text version it's far more bearable though. I would like to comment on some of the other reviewers who claimed this novel is full of graphic gay sex. It is not. There are some mentions of gay sex, but none of it drags on more than a few seconds and deals more with the main character's discomfort with growing old as a man involved in a gay culture which is heavily focused on sex. None of the sex is any more steamy then something you'd find in a standard heterosexual fiction.

I was charmed by this title, and listened with rapt attention. The dialog is well-written and warm. The reading is excellent. I really enjoyed the story, but I have to admit I kept thinking "this guy is really thick" -- there were so many easy things he could do to resolve his questions, but he was always too late in doing them -- so I guess what I experience was frustration with the character.

The weave is next to perfect, the story is great, the idea is intelligent and i liked the chosen point of view and the bottom line.
I also appreciated the gentle line drawn between reality and fiction.
Maupin decided to take the idenditying point of view, instead of the rational point of view he probably would have taken in real life. He tried to weave and find in himself the human sensitivities that might make one "gullible" at times.

I enjoyed this narration very much and fell for Armistead Maupin.
(i gave it 4 stars instead of 5 since it's not exactly literary fiction).

It's such a mistake to have allowed Armistead Maupin to read his own book. He's not a great reader in general, but here it's very confusing to have him present his own material because it's based on actual events that have been elsewhere reported. One ends up wishing he'd just written a memoir, since he injects himself so heavily into the story by acting as its interpreter.

A wonderful treatise on reality -- as it appears to each one of us. I really enjoyed Tales of the City. This is so much more, so rich, so multilevel. It ranks right up there with the best audiobooks I have heard.

Maupin's narration, while not delineating or differentiating characters as many readers do, is immediate, engrossing, and real.

Not Tales of the City

I purchased this book because I loved the Tales of the City series on ShowTime. I had not read any previous works by this author. Once I started listening I was completed enchanted with the rich detail and description of each character and scene. Maupin's use of the English language is without a doubt top notch. I wish that I could think as well as he writes. He is also the reader/actor in The Night Listener. His soothing voice and unusual accent makes this book just that much better. Five stars from this longtime Audible listener!

I enjoyed it very much. Maupin is a great reader of his own work. The story kept me interested all the way through to the end. Highly recommended.