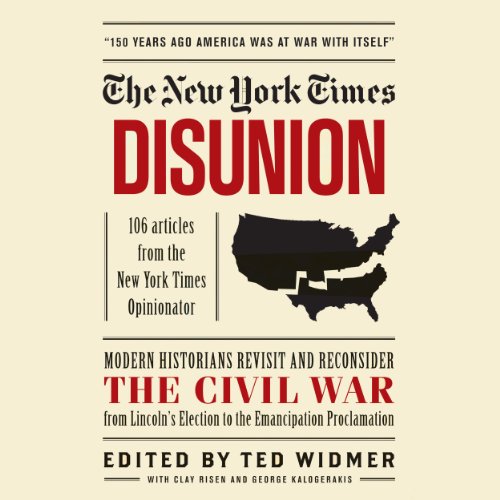 A major new collection of modern commentary - from scholars, historians, and Civil War buffs - on the significant events of the Civil War, culled from The New York Times' popular Disunion online journal.

Since its debut on November 6, 2010, Disunion, The New York Times' acclaimed journal about the Civil War, has published hundreds of original articles and won multiple awards, including "Best History Website" from the New Media Institute and the History News Network. Following the chronology of the secession crisis and the Civil War, the contributors to Disunion, who include modern scholars, journalists, historians, and Civil War buffs, offer ongoing daily commentary and assessment of the Civil War as it unfolded.

Now, for the first time, this fascinating and historically significant commentary has been gathered together and organized in one volume. In The New York Times: Disunion, historian Ted Widmer has selected more than 100 articles that cover events beginning with Lincoln's presidential victory through the Emancipation Proclamation. Topics include everything from Walt Whitman's wartime diary to the bloody guerrilla campaigns in Missouri and Kansas. Esteemed contributors include William Freehling, Adam Goodheart, and Edward Ayers, among others.

The book also compiles new essays that have not been published on the Disunion site, by contributors and well-known historians such as David Blight, Gary Gallagher, and Drew Gilpin Faust. Topics include the perspective of African-American slaves and freed men on the war, the secession crisis in the Upper South, the war in the West (that is, past the Appalachians), the war in Texas, the international context, and Civil War-era cartography.

Enthralling collection of essays about the US Civil War. Lots of little known facts, and fresh look at all aspects of the controversy.
Incredibly entertaining. Expertly narrated!

Definitely don't pass this one up!

Excellent written account of many historic issues not covered in many Civil War books I have read to date. Dates and time lines are given which helped keep me in proper perspective.
These were issues taken from actual writings, newspaper articles, diaries, letters and some historians.
Of particular interest were excerpts from participants' memoirs and actual Civil War Reunions that were held after the War and some of the comments made by those who participated. I thought Pickett's comments at a Gettysburg Reunion was a classic.
I would recommend this book for everyone looking for Civil War facts you won't just find everywhere.

The Details of History

Would you listen to The New York Times: Disunion again? Why?

To review and retain more of the details about the events leading up to the Civil War.

The book is a collection of historical essays. I don't know that I could pick a favorite character.

As this is a collection of short stories and essays, I don't have a favorite scene.

The New York Times has brought dozens of the critical details about the Civil War through different authors and in so doing has brought a clearer understanding about the events, ideas and the various causes to the war. Some are better told than others, but what strikes me is that each reader will probably like different parts depending on personal preferences about what kinds of trivia interest him or her the most.

One of the Civil War books you MUST read

A collection of over 100 short essays on very specific topics. ...excellent! a must !

Loved the historical content; the personal insight from the family's & survivors. Overall narration was fantastic and I most certainly would recommend!