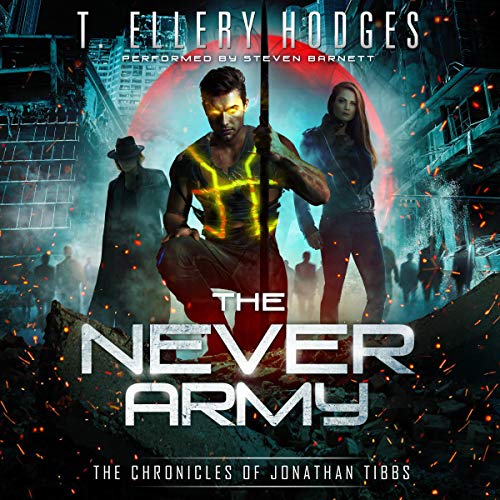 At the gates between worlds. In a war outside of time. They fight for us.

The man they took prisoner was not the Jonathan Tibbs they remembered. He said that time was running out. That the world faced an enemy it could not defeat. He said everything depended on whether or not they could make a leap of faith.

Then, he asked them for five nuclear warheads.

The Never Army is the final installment in The Chronicles of Jonathan Tibbs - a mind-bending, genre-crossing, multiple award-winning, action-adventure trilogy.

The Chronicles of Jonathan Tibbs has sold over 50,000 copies worldwide and garnered over 5,000 five-star reviews on Amazon, Audible, and Goodreads.

I'm so pleased that this author decided to write a trilogy that actually had a satisfactory ending. This is a great example that a series doesn't have to be over 10 books long to be an engaging, fun, thoughtful story that takes the reader through a powerful arc. Absolutely recommended!

Hot dang this was good!

I’m so happy to say that this is the best book in the trilogy performance wise. Barnett you’re amazing, I can’t thank Mr. Hodges enough for making one of the most satisfying conclusions to a trilogy I’ve ever had the pleasure of putting to my ears.

really well written, and Steven does a great job with Narrating all of the books.

My favorite sci-fi series to date (among many)

I have been disappointed with so many series that after years of waiting for this third (and last, though I didn't know that going in) installment my expectations were very low. I didn't read any reviews or even the publisher summary as there was no way I wasn't going to buy it. My low expectations couldn't have been more misplaced.

This book was like putting on my most comfortable old shoes instead of the shrunken old shirt I used to love. It (not just this book, but the entire trilogy) has every important element for an engaging story. It was a perfectly seamless continuation/conclusion of the story I had already grown to love; great characters, thought provoking storyline with no boring lulls in plot continuation, great humor (without trying too hard), and occasional strong emotional content.

A fantastic ending to an amazing series! Jonathan Tibbs will forever have real estate in my mind and my heart!

Ending made me cry.

One of the most satisfying endings that I never expected. Well done, looking forward to more publications.

This book series is absolutely amazing. And this book is a wonderful finale that leaves you satisfied. Needs to be a TV show

Loved it. No spoilers

The story didn't go the way I expected, it was much better. This is why I'm not an author and T. Ellery is. The narrator gives all the characters distinct voices without being comical, and I didn't feel accents to be overdone. Overall I was very satisfied with the ending to the series, and will surely check out what the author publishes next.

There was a couple (2) of glitches in the audio. One where the volume shifts and another where it skipped a bit (I suspect half a word, but can't confirm as I don't have the physical book).

Amazing end to a wonderful series! The third installment was well worth the wait. Patiently waiting for what you'll write next. No pressure lol.

If you’ve read book 1 and 2, then 3 was just awesome. Every book was more interesting more exciting more everything! This is the kind of book I can see fleshed out in screen. Really interested in what the writer is up to next!

I originally found this series through a recommendation from „Overly Sarcastic Productions“. I immediately bought the first book and loved it.
The author did a really good job with creating a trilogy that wraps up nicely, can’t wait to see what he brings out next!

A bit of a cliche, but who doesn't like a good hero's journey tale.