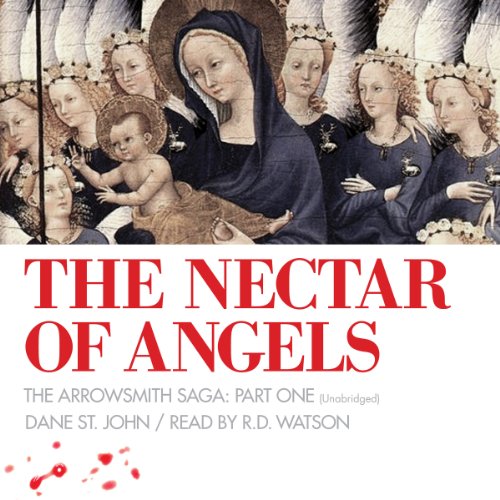 The Nectar of Angels

In the chaos of 14th-century England and France, wine is the nectar of angels - a valuable commodity buttressing kingdoms and vaulting vast fortunes. A mysterious old archer named David Arrowsmith recounts his tale to an eager French chronicler, Jean Créton, when the latter learns that his mission to Scotland seems a failure. The burden of Arrowsmith's story rests with Créton, who suddenly finds himself writing about a seemingly cursed infant that barely escapes the grip of the Black Death in rural Wales when his family dies.

Except for a single clue on a note attached to an arrow, Jacques and his wife Sophie do not know the identity of the boy's parents when they decide to adopt him. Taken to Bordeaux, the child they name David becomes caught up in a series of events that exposes the corruption of the wine trade, and soon reveals him to be an unmatchable and ambidextrous archer. Banished from Bordeaux after attempting to protect Jacques from a conniving enemy named Pierre Juneau, David flees to England, where he becomes apprenticed to the likeable Richard Lampley in London, and grows to adore the exquisite Eleanor, a peasant girl with her own ambitions. Soon, David is unwittingly flung to Oxford University after a heartrending run-in with a doomed priest sent as a spy to the Avignon papacy, and is ultimately protected by a brilliant scholar named John Wycliffe as renewed conflict between England and France looms, and the Hundred Years’ War threatens his new life as a merchant and scholar.

Really? Where are the honest reviews?

Anyone who can listen to this narrator must be in a true coma! I cringe when I hear the voice because it reminds me of when you're put in a corner and told all the things you've done wrong. The story may have been okay..... I just couldn't listen very long to a monotone voice that sounded truly creepy.

It transports you to another time, another world

Even if you're not into historical fiction, this is an absolutely delightful book. I was constantly torn between wanting to know what happened next and not wanting it to end. I burned through Part One in about a week and could barely wait to get into Part Two. R.D. Watson's narration is expertly done, I loved his intonation, accents and interpretation of St. John's written word. He does a masterful job of blending history with an action-packed thriller. For me, the measure of my enjoyment of a book is in how much of a let-down I experience when I finish it. Luckily, I had Part Two, The Venom of Serpents to mitigate the effect.

A beautiful and exciting adventure !

What a wonderful adventure through the life and times of strife and turmoil. This author takes one through history and makes you feel like you are one of the characters in time. I couldn't quit listening, it was so intriguing. I never cared much for history, but the way this author presents it, I am now. The narrator was absolutely true to the story and magnificent. I hope everyone listens to this enchanting story and reviews it for the author.

An adventure through 14th century Europe

Yes, if they enjoyed classic historical fiction. Some people might find the history to be too much, but I loved it.

What was one of the most memorable moments of The Nectar of Angels?

Probably the joust or when David went to Wales to find out about his family.

Dane St John's first novel in the Arrowsmith Saga lays down the foundation and the road map that will take you on an epic adventure. I was constantly thrust back into 14th century Europe every time I picked up the book. St. John does a great job of explaining historical facts and references so it was easy to submerse myself into the story that is being told by our narrator, David Arrowsmith. I found myself cheering at one moment and lamenting the next at some of the characters in the story, some of which are actual historical figures. Once you finish this novel you will find yourself immediately picking up the second part "The Venom of Serpents" to finish the epic journey of David Arrowsmith. If part one is a stroll through the countryside then part two is a heated race to a harrowing end.

If I was reading this book myself I might recommend it to a friend who enjoys historical fiction. I would not recommend the audible version.

I enjoyed the historical descriptions of life in these times, especially in the wine trade. I also enjoyed the references to early Oxford University and events that preceded sweeping changes in the Church.

What didn’t you like about R. D. Watson’s performance?

Watson used a very low voice, with a tone that seemed both urgent and suggestive of doom throughout the whole story. I found it very distracting. He also seemed to have great difficulty jumping from one character to the next, especially where diverse accents were involved making it confusing to recognize who was supposed to be speaking. A different reader could have made a great difference to the overall experience.

It was difficult to stick with this story, due to Watson's performance. Also, not sure where the Nectar of Angels came into this story. Perhaps the wine?

I love historical fiction and read (& listen to) mountains of it, and my focus for the past 8 years has been the so called "Middle Ages," particularly the 1300's and 1400's. Despite all the many titles of this genre that I have voraciously consumed over the years, the two books of the Arrowsmith Saga, of which this is the first volume, blew me right out of the water !! After listening to both this title and Book Two ("The Venom of Serpents") on Audible, completely captivated by every single word in a way that rarely happens to me, and in addition (as the icing on the cake, as if any were needed) seduced by the brilliant narrative skill of R. D. Watson, I am so besotted that I am actually going to buy both BOOKS and hold them in my hands and peruse them in the form in which they were first created, namely on paper. But these two audiobooks are both simply stellar, and I highly recommend them to anyone who loves history, anyone who loves the Brits, anyone who loves historical fiction, and indeed anyone who enjoys a tale spun so intricately that Dickens comes to mind--- except that here we have not only great, inventive, engrossing, extraordinarily creative writing, but also a fascinating look at a distinct period of history, complete with kings and knights and churls and priests and historical figures like, of all people, Wycliffe !! Love, violence, greed, heroics, a great work of art, sudden twists of fate, it's all here-- a true roller coaster ride !! Hang on tight !!

Well I could go on and on but ……... just buy this pair of audiobooks and have a whale of a time listening to them !!