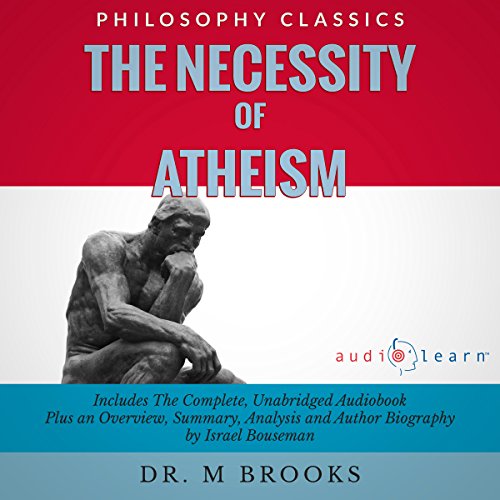 The Necessity of Atheism

The Necessity of Atheism is a critical review of organized religion from the perspective of a psychologist. The history of mankind is examined with consideration of the scientific evidence available at the time of its writing, and this history is compared with that of the biblical account. Furthermore the influence of religious beliefs on science and philosophy are investigated at length. This is a work that could have been published only in an era in which free thought was on the rise and contains many conclusions that are only now coming into acceptance in the modern era. It flies in the face of accepted doctrine and addresses the proper place of religious tradition in the modern world.

The full narration of the text is preceded by a summary that gives a brief biography of the author and background information for the work as well as an overview, a synopsis, and an analysis. Also included are an exploration of the criticisms, historical context, and social impact of the text.

This is a must-hear for those interested in religion from a historical or philosophical standpoint and for any interested in expanding their knowledge of religion and its impact on the human race.

Very interesting book given the period when it was written. Unfortunately the narrator is so bad that it ruins almost entirely the pleasure of listening to this audiobook. We suffer with her when she struggles with words in foreign languages - and there are many since the book deals biblical quotes and the works of philosophers from all over the world - and even english words with too many syllables. Each time she says "anthropomorphic", I thought her jaw was about to dislocate. And if it was not enough, the sound editing seems to have been entirely forgotten. Often times, she stumbles over a word and she repeats the sentence over and over until she gets it right. I even heard her say a frustrated "For goodness sake" after a mistake. Please, for her own good, don't hire that person again. And fire the sound editor too.

The story is good, the narrator's voice is ok but too many repeats that clearly could have been edited out, the sound editor should be taken out and shot.