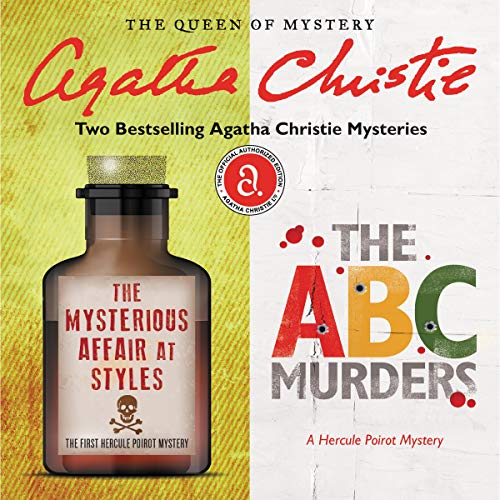 The Mysterious Affair at Styles & The ABC Murders

The Mysterious Affair at Styles & The ABC Murders

The Mysterious Affair at Styles - Hercule Poirot solves his first case in the Agatha Christie novel that started it all.

Who poisoned the wealthy Emily Inglethorp and how did the murderer penetrate and escape from her locked bedroom? Suspects abound in the quaint village of Styles St. Mary - from the heiress' fawning new husband to her two stepsons, her volatile housekeeper, and a pretty nurse who works in a hospital dispensary. With impeccable timing, and making his unforgettable debut, the brilliant Belgian detective Hercule Poirot is on the case.

There’s a serial killer on the loose, working his way through the alphabet and the whole country is in a state of panic. A is for Mrs. Ascher in Andover, B is for Betty Barnard in Bexhill, C is for Sir Carmichael Clarke in Churston. With each murder, the killer is getting more confident - but leaving a trail of deliberate clues to taunt the proud Hercule Poirot might just prove to be the first, and fatal, mistake.

truly timeless, with a narrator so good you forget its being read at all. instead, it's like your there.

Loved every minute of this excellently performed story. Who can possibly outwit the great Poirot? Christie at her best!