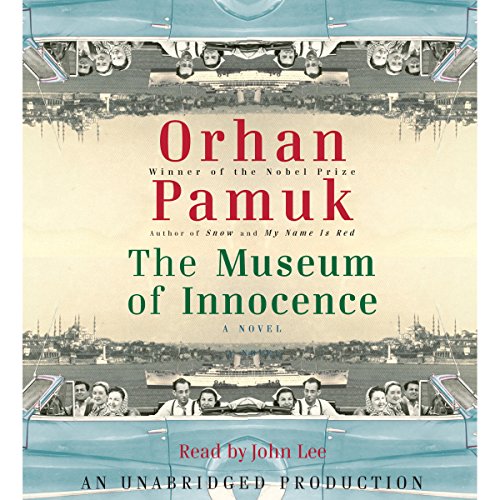 The Museum of Innocence

The Museum of Innocence

"It was the happiest moment of my life, though I didn't know it."

So begins the new novel, his first since winning the Nobel Prize, from the universally acclaimed author of Snow and My Name Is Red.

It is 1975, a perfect spring in Istanbul. Kemal, scion of one of the city's wealthiest families, is about to become engaged to Sibel, daughter of another prominent family, when he encounters Füsun, a beautiful shopgirl and a distant relation. Once the long-lost cousins violate the code of virginity, a rift begins to open between Kemal and the world of the Westernized Istanbul bourgeoisie - a world, as he lovingly describes it, with opulent parties and clubs, society gossip, restaurant rituals, picnics, and mansions on the Bosphorus, infused with the melancholy of decay - until finally he breaks off his engagement to Sibel. But his resolve comes too late.

For eight years Kemal will find excuses to visit another Istanbul, that of the impoverished backstreets where Füsun, her heart now hardened, lives with her parents, and where Kemal discovers the consolations of middle-class life. His obsessive love will also take him to the demimonde of Istanbul film circles, a scene of seedy bars, run-down hotels, and small men with big dreams doomed to failure.

In his feckless pursuit, Kemal becomes a compulsive collector of objects that chronicle his lovelorn progress and his afflicted heart's reactions: anger and impatience, remorse and humiliation, and daydreams that transform Istanbul into a cityscape of signs and specters of his beloved, from whom he can now extract only meaningful glances and stolen kisses in cars, movie houses, and shadowy corners of parks. A last change to realize his dream will come to an awful end before Kemal discovers that all he finally can possess, certainly and eternally, is the museum he has created of his collection, this map of a society's manners and mores, and of one man's broken heart.

"[An] enchanting new novel of first love painfully sustained over a lifetime....Freely’s translation captures the novelist’s playful performance as well as his serious collusion with Kemal. Her melding of tones follows Pamuk’s agility, to redirect our vision to the gravity of his tale" (Maureen Howard, New York Times Book Review)
"A Startling original. Every turn in the story seems fresh, disquieting, utterly unexpected...spellbindingly told....The genius of Pamuk’s novel is that although it can be read as a simpel romance, it is a richly complicated work with subtle and intricate layers." (Marie Arana, The Washington Post)
"a soaring, detailed...mausoleum of love....a masterful work." ( Publisher’s Weekly)

one of the very best I've ever heard

That's not an exaggeration. This is one of the very best audio books I've ever listened to and I've listened to hundreds. (Okay, so I'm a Pamuk fan, too.)

True, the book is not about heavy plot or action or even suspense. It's about a man's obsessive search for his past (Istanbul) with the major themes being the role of women, love and loss and guilt and social class- change. In a sense it's about
Istanbul itself.

The first person protagonist is not a particularly likable guy - he's rich, spoiled, selfish and hypocritical. He's engaged to a woman of his own class but has a totally illicit affair with his much younger and very beautiful cousin. The affair, while fairly short-lived, obsesses him for the rest of his life even though she disappears completely for awhile. At the point of the novel's main frame he's constructing a museum of artifacts based on his love. There are ways it's really comparable to Proust or Nabokov but Pamuk is totally fresh and new.

The narrator, John Lee, is pitch perfect - there were times when I just closed my eyes and listened to the rich prose.

The main character is not likable, and I never could decide whether or not Pamuk wanted us to like him, which is part of what made the book so hypnotic. It's rare that you get a beautifully drawn character that sits on a razor edge of moral culpability without easily tumbling to either side. I think that's what I liked most.

And of course . . . there was John Lee. He is amazing. I listen to books just because he's the narrator. He somehow manages to avoid sounding pedantic when trying to get accents and pronunciations just so, which is a tricky thing to do.

What would have made The Museum of Innocence better?

A concrete storyline. Maybe a little more action -- it was all repetitive ramblings of the author.

What was most disappointing about Orhan Pamuk and Maureen Freely (translator) ’s story?

What aspect of John Lee’s performance would you have changed?

I normally like John Lee -- but this one .l. maybe it was the tone of the novel.

The author should have headed Hemingway's writing style -- Write, then go back and edit out at least one-third.(and repeat the edit process).

in a foreign language while you are trapped in an elevator. Every minute detail of a decades long obsessive love is explored over and over again. '...and here, dear reader, is the spoon my darling Füsun used to stir her tea on Sept 23 1976...'. It seemed to never end. On the plus side a listener can tune out for periods of time and not miss a thing. By the end I was skipping chapters without missing a beat.
However, John Lee is truly a great narrator.

A great novel, but it frustrated me.

I recognize this as a great novel. It could have also been a great love story, but I think it ultimately fails in that regard. As a westerner, I simply lost respect for the main characters in their lack of taking control over their own lives. While, I think that was part of the point of the story, it was very frustrating. Especially considering the length of the book. I enjoyed learning about Istanbul and how its society operated during that time. Someday I would like to visit the museum in Turkey. The very best thing about this audio book is the narrator. John Lee is the best narrator I have ever listened to. Wonderful performance!

Story of a man who has an affair while engaged to another. When he finds he can't have both women, he ditches his engaged for the mistress he fell in love with, only to learn she has now been married. Lengthy details of how he "gets her back." His rambling profession of love, just details his love's habits. He never understands her as a person.

What was the meaning of this book? I have listened to over 500 books in the past 3 years and have NEVER listened to such drivel. The only reason I finished it was to write this review. I am going to give the author the benefit of the doubt and listen to another. I must be missing something if he is so revered , and won a Pulitzer Prize . Or am I mistaken?

I can't believe I wasted 2 credits on this horrid book! It is so tedious and dull, I am so sorry that I didn't pay better attention to the other reviewers instead of being sucked in by one who made it sound interesting. Listening to him drone on and on about his inability to think of anything but his lost mistress is a plague on the brain. Save your sanity, your brain and your credits!

This is my first review on audible, although I have listened to over 30 books. I feel the need to warn other readers about how boring and pathetic the main character is in this book. The whole story surrounds him whining and complaining about lost love from a pre-marital affair. He ruins his own marriage and refused to give up on his mistress even after she moves on and gets married. I could not finish the book because it just kept dragging on with no end in sight. I was excited to read another book by Orhan Pamuk and to "revisit" Istanbul after going there on my own honeymoon but this one was a real waste of my credits.

An elegant use of metaphor to present the Turkish people, their history and their lives as not contrasted to the West.