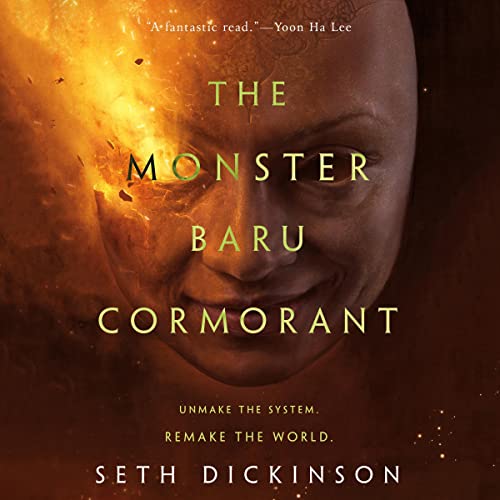 Her world was shattered by the Empire of Masks. For the power to shatter the Masquerade, she betrayed everyone she loved.

The traitor Baru Cormorant is now the cryptarch Agonist - a secret lord of the empire she's vowed to destroy.

Hunted by a mutinous admiral, haunted by the wound which has split her mind in two, Baru leads her dearest foes on an expedition for the secret of immortality. It's her chance to trigger a war that will consume the Masquerade.

But Baru's heart is broken, and she fears she can no longer tell justice from revenge...or her own desires from the will of the man who remade her.

This is the best book I've ever read. I don't even know what's real anymore.

Dickinson does it again

For fans of the first book, there's a lot to love here. There's also some growing pains as it's a second book in a series and spends a fair amount of time building for the rest of the series.

Baru is brought down to earth somewhat as she becomes more reactive than proactive and her schemes don't seem to succeed quite like they did in book one. But, overall, this is a great book and I'm super excited to see the next one very soon.

The plot steps away from it's essence to chase after a poor imortality gambit; dissapointing.

The first book was great. It built well, had wonderful surprises and had a well developed character in Baru.

This sequel sort of tossed all of that away. All the unease and paranoia of the first book, that Baru's secret love would be unveiled, were essentially all for nothing. In this book, her "secret" is common knowledge and nobody seems to care. All Baru's planning and intelligence and her savant-like abilities are all swept aside and she is wimpy and unsure. Maybe there is another twist out there, but it never happens in this book.

Kept waiting for the book to become interesting or that something happen at least. Nothing. The sexual parts seemed out of place and forced. The narrator was good.

I read the first installment of this series and liked it well enough to try the second. But this book is incoherent and goes nowhere. In particular, it does not work as an audiobook, given the many many strange names and the long back stories and flashbacks and histories of various realms that are jammed in to the muddled and pointless plot.

I really liked the first book. Focusing on one region, and a single overarching goal was a good back drop to Baru's devious machinations.

In this book, with three hours left, I couldn't tell you what's going on, what Baru's plans are (they seem to change every quarter chapter), or what the main plot is about.

As soon as it seems like Baru is getting a hold of things, she is attacked by navy fleets almost out of nowhere... twice.

Perhaps this is good if you really sit down and pay attention to only this, but I couldn't follow what was going on while driving for two hours. My attention drifts for just 15 seconds and I literally have no idea what's going on in the chapter anymore.

Seems like all Baru does in this book is run away and lose various body parts while waxing introspective about Tain Hu. Not as much of the ruthless, brilliant scheming I remember.

The plot about the Cancriot makes no sense. Transferring tumors to gain immortality? Eh? I thought the Falcresti were supposed to be smart. Maybe this is fleshed out more in later books.

Also Tain Sher or however it's spelled is a crappy villain. What motivates her? Death of a relative, although she turned on her Falcresti masters. Why did she turn? If it was explained I don't remember. She seems like a weak and nebulous villain, just a reason for Baru to flee all over the place.

The narrator is again terrible. She starts out a little better than Book 1 simply by reading more slowly. But since this book as multiple female POV characters, she is even harder to follow. When perspective shifts it usually goes unannounced. I frequently found myself having to rewind after realizing I was hearing a different character. Because they all sound the exact same.

It's listenable at like .85x speed and if you're willing to rewind many times.

Beautifully written but a bit lackluster

The first book was a climb with Baru making calculated moves in life or death situations. With each victory she moved closer to her goals. It was satisfying and exciting. This sequel however lacks much of that and leaves our main character going through the motions as she tries to reconcile with the events of the first book. While the plot is merely good, the writing and the characters are amazingly fleshed out and a joy to listen to. Overall, a good book but doesn't quite live up to the promise of the last one.

The Rabbit Hole Goes Waaay Down

Rides the line between lyric brilliance and bat-sh** crazy gibberish. Its universe is carefully realized but sometimes obsessive in its minor details. Frequently compelling however.