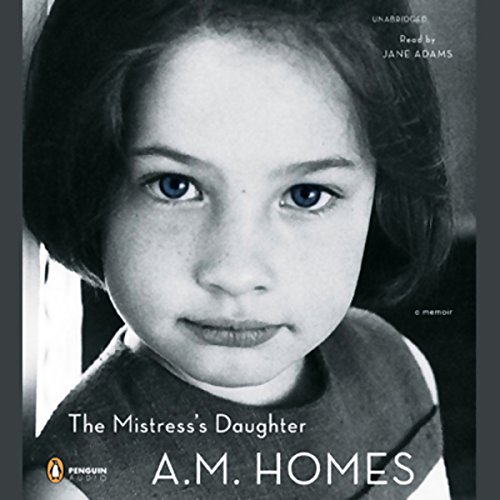 Before A.M. Homes was born, she was put up for adoption. Her birth mother was a 22-year-old single woman who was having an affair with a much older married man with children of his own. The Mistress's Daughter is the story of what happened when, 30 years later, her birth parents came looking for her.

Homes, renowned for the psychological accuracy and emotional intensity of her storytelling, tells how her birth parents initially made contact with her and what happened afterward (her mother stalked her and appeared unannounced at a reading) and what she was able to reconstruct about the story of their lives and families. Her birth mother, a complex and lonely woman, never married or had another child, and she died of kidney failure in 1998. Her birth father, who initially made overtures about inviting her into his family, never did.

The story then jumps forward several years, to when Homes opens the boxes of her mother's memorabilia. She had hoped to find her mother in those boxes, to know her secrets, but no relief came. She became increasingly obsessed with finding out as much as she could about all four parents and their families, even hiring researchers and spending hours poring through newspaper morgues, municipal archives, and genealogical Web sites.

This brave, daring, and funny book is a story about what it means to be adopted, but it is also about identity and how all of us define our sense of self and family.

"A compelling, devastating, and furiously good book written with an honesty few of us would risk." (Zadie Smith)

"As startling and riveting as her fiction...a lacerating memoir in which the formerly powerless child triumphs with the help of a mighty pen." (San Francisco Chronicle)

Being a good listener rewards in the end

The book is really about listening as another person explores deep feelings about connection, family, adoption and responsibility for personal behavior and choices not limited by time. It is all too easy to judge such a free flowing stream of consciousness tale as it unfolds, however letting the story play itself out pulls all the threads together. The need for connection and story transcend adoption issues and pertain to anyone who has struggled to know themselves better.

I had anticipated a story with more substance than what was provided. The author was far too hard on her biological mother and far too expectant of her father. The final chapters were too paper trail detailed and it became so boring that I gave up the read towards the end.

I am not surprised by the first two negative reviews and came to my conclusion before ever reading them.

It is unfortunate that the author wanted to "explore" her lineage after the death of her biological mother when the opportune time was during her life which the author basically ignored due to her own insecuritites, sense of shame and arrogance. Why bother with the research after the fact when during her mother's life she had a true and viable source to gain answers from. Her total lack of understanding of her biological mother and her negative representation of her mother's voice, as portrayed on the audible edition adds to this disappointment I felt, it is as if she felt her mother was a caricature.

I was definitely disappointed with this read/listen and found myself annoyed with her voice, tone, lack of inflection and "whining"... There is an old saying, "if it don't fit, don't force it". Obviously she was blessed with a good family, compassionate Mom & Dad AND a mother who cared enough to give her a better life and also never, ever forget about her to the extent that she did not marry or really get on with her own life. Great sacrifices were made on the author's behalf and yet she is very self pitying to the point of nauseam. Reconstructed and without the flooding of self pity, she could have produced a much better book with a positive message for the reader.

This book is absolutly painful to listen to. I read the reviews but did not listen because I thought the story would overshadow the narrator. The character voices are very annoying and the narrator seriously lacks emotion. The narrator's reading reminded me the way you would read a cake recipe. I am still trying to finish the book because I paid for it but I don't think i'm gonna make it. Don't waste your money too.

Craziness (more or less) under control

A. M. Homes is clearly a mess, as she is glad to show us over and over again. In that way she is normal. But she is also a master story teller with a fine story—about herself. But she does not have have the sense to stop writing when the story ends. I enjoyed the first half of the book, but didn't bother with the second half.

Best when she is wry instead of bitter, though she is sour as often as she is thoughtful. A bit one-sided.

Great story...right up until the author started detailing, in excruciatingly minute details, her family ancestor quest. Yawn. Perhaps this is very interesting to people who are ancestry buffs, but I found my mind wandering to what I have next up on my "Wish List". Too bad, really, because otherwise the story was riveting right up to that point in the book. I was also put off a bit by the lackluster narration at the beginning.

A journey worth taking!

I found this story compelling and worth the journey. Those who stated that they did not listen to the second half missed out! I will admit that I found myself "zoning out" in a few places and being reminded of the book of Numbers a couple of times. However, I believe this was an important aspect of Ms. Homes' journey and helped her immensely to heal. I love that she comes full circle in the end. I was so worried about her throughout! I am happy that she has realized what really matters! I did not find the narrator annoying or monotone. I actually enjoyed listening to Jane Adams. I thought she was very appropriate for this type of reading.

A.M. Homes is a great writer but Jane Adams ruined the book for me. She was monotone,dull and she often slurred like a drunk.I didn't finish it. Let's hope that A.M. Homes makes a better choice next time.

The readers voice was boring and mono toned. The story line, at times was engaging but I would not listend to it a second time. The story line needs some work. Left me wondering if this is the first published story belonging to the writer.

I could not agree more with two of the other reviews. The way this was read got on my nerves from the very beginning. Forget about the second half. Too much detail and none of it really mattered in the end.