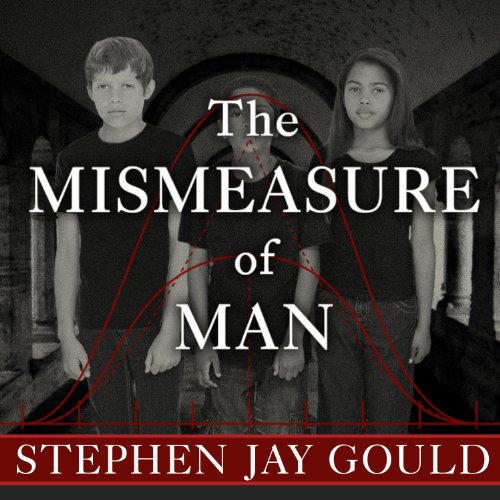 The Mismeasure of Man

When published in 1981, The Mismeasure of Man was immediately hailed as a masterwork, the ringing answer to those who would classify people, rank them according to their supposed genetic gifts and limits. Yet the idea of of biology as destiny dies hard, as witness the attention devoted to The Bell Curve, whose arguments are here so effectively anticipated and thoroughly undermined. In this edition, Stephen Jay Gould has written a substantial new introduction telling how and why he wrote the book and tracing the subsequent history of the controversy on innateness right through The Bell Curve. Further, he has added five essays on questions of The Bell Curve in particular and on race, racism, and biological determinism in general. These additions strengthen the book's claim to be, as Leo J. Kamin of Princeton University has said, "a major contribution toward deflating pseudo-biological 'explanations' of our present social woes."

"A rare book---at once of great importance and wonderful to read." ( Saturday Review)

a must for everyone in academic research

it was amazing to have historical input of the methods, data, biases and quotes from great horrible and good influencers on eugenic matter. the subject is not dead, so this book is a must.
it has also a second layer of training on how to do responsible science.

A story of history that makes you shake your head in disbelief but also an excellent story of cognitive bias and its influence on science. A story that can still occur today.

The book preface is painful. The author spent what felt like an hour complaining about the Bell Curve book and his petty feud with the authors. My patience was worn thin during the preface. Once I got to the actual book and the content felt equally dated and whiny, I gave up.

Only criticism is that the original book very frequently quotes historical material at length. If one listens on and off, sometimes you may hear something a bit off the wall when you come back. You hope it’s not Gould’s words, and it isn’t: it’s the material Gould is quoting. The producers could have found some technological way to make these quotes sound differently, or the narrator could have given slightly different vocal cues.

wow! I was given this book by a respected Professor years ago during a Time when I was inundated with my studies as a student. I regret these twenty years I've spent without the light this works sheds on the problems of human potential, racism and elitism.

A Hasty Response to The Bell Curve

The author tried his best to jump-in and debunk the Bell Curve study - and he tried too hard - I found his efforts forced. What was good was the examples that shed light on the deficiencies of intelligence tests, especially back in the mental and social Dark Ages of the mid-20th Century (at least its version of such 'Dark Ages')...

What made the experience of listening to The Mismeasure of Man the most enjoyable?

What does Arthur Morey bring to the story that you wouldn’t experience if you just read the book?

Would not be an easy book to read, so listening makes getting through it doable

If you could give The Mismeasure of Man a new subtitle, what would it be?

IQ tests and the prejudices of the men developed them

I got this book because Richard Dawkins disagreed with something Gould thought, but am not sure if it is ideas in this book or not. This book attacks the belief that intelligence is strictly hereditary; it could be that Dawkins thinks Gould goes too much over to the "nurture" side of the debate, but I'm not sure. Audio says that PDF of charts are available for download, but I did not see them in my library so not sure how to get them, if they are actually available

Would you listen to another book narrated by Arthur Morey?

I wouldn't listen to another nonfiction book narrated by Arthur Morey. The quoted passages were difficult to follow, and hard to keep track of what was quote and what was text. In the first few chapters, he seemed to be doing a slight accent or different voice for each quoted passage, which was great and made things easier to follow, but he abandoned that approach and read everything in the same voice.

A great book that everyone should read.

Yes I would. Having an audible version of such a nice book is very convenient and we can listen to it anytime anywhere.

What other book might you compare The Mismeasure of Man to and why?

Why Evolution is True by Jerry Coyne. It gives us different perspectives on evolution.

The voice of the reader of The Mismeasure of Man is a little monotonous. It is hard to keep listening for more than an hour.

Evolution is everywhere. We are not more special than any other species. Being a humble human being may help open doors to a greater understanding of the past, present and future of our species.

Books on science, anthropology, archaeology, geology are as important as novels and popular literature. I notice there are many options on classic and modern literature but not so many in books dealing with natural sciences. The Origin of Species would make a great option.

Good summary/history of intelligence testing throughout history, if you can get past the author’s ego and political opinions… The most frustrating part is he never gets around to anything near to his thoughts on the topics only his desire to attack/rebuke another book and its authors.