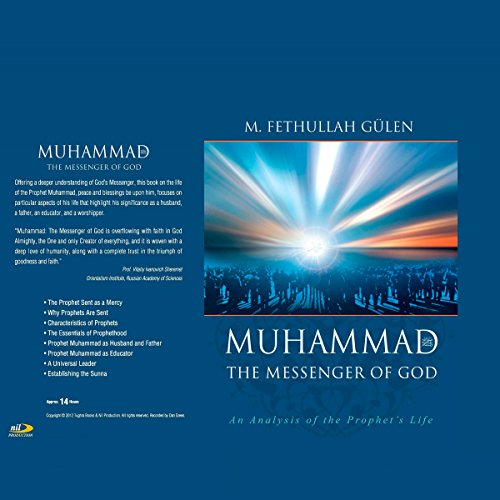 The Messenger of God

The Messenger of God

A compilation of Fethullah Gulen's sermons on the life of the prophet, the book offers us a deeper understanding of God's Messenger through looking into his exemplary life from different aspects.

Filled with wisdom and love

Would you listen to The Messenger of God again? Why?

For sure. The book is hope-filled and revives my confidence in the truthfulness and mercy of the message the Prophet Muhammad (peace be upon him) brought.

The Prophet and his wife Khadija do certainly emerge above all others, as they set the epitome of what it means to be faithful for both men and women.

The section on his mildness and forbearance.

Meet the best of all mankind.

This book is filled not only with comprehensive biographical information, but also emotions with so many moving scenes of the Prophet's exquisite character. As one reads or listens along, one cannot help but rescale himself before this best model, and hopefully transform himself for the better.

I didn't much about the author before reading this masterpiece. He explores, explains, and entertains.

can't miss this if intersted in religions

i have listened to this book two times now and it. Besides giving thorough information about the religion itself, you get to know the personality of prophet Muhammad [PUH] and his extraordinary achievements.

What did you love best about The Messenger of God?

Includes a lot of information. Well researched in general. Author seemed well-intentioned and had a love of the Prophet (sas) and sahaba (ra).

What was one of the most memorable moments of The Messenger of God?

Some of the stories about the dedication of the sahaba.

This narrator has a good voice, intonation and pacing, but did not bother to do his homework on pronunciation of very common Arabic names, places, and terms. For example, Abu Hurairah (ra) is Abu Hoo Ray Ray . Abu Bakr (ra)is Abu Baker. Khadijah's (ra) name is reapeatedly pronounced as Khatijah. "Umar" is pronounced with the accent on the last syllable in several places. Presumably the transliteration (as is normally case) is just something you pronounce the way it looks, but he seems to arbitrarily make up his own rules, such as pronouncing "a" or "ah" as "ay" etc. This improves somewhat as the book progresses, but he also picks up the "z" mispronounciation of the "dh" sound. It would be unthinkable to make this many mistakes in pronunciation of common names and places in a book on Western hisotry, so this comes across as arrogance that it doesn't really matter because it's some "lesser people's" culture. Also says "vicegerent" at least three times instead of viceregetn.

I found the large number pronunciation errors offensive because it would not be acceptable for a book on Western history.

This book is not a chronological biography, but has sections based on themes, such as reasons prophets are sent, etc.
There is a lot of good information here.
I found this book somewhat odd in several respects. There are passages about the importance of the Sunnah, so this is a Sunni writer,
Also contains a lot of references to saints, and sufism, Rumi, tariqas, other sufi leaders.
Talks about Ali (ra) as "the greatest saint" and lots of discussion about Ali (ra) , which is mainly in line with typical Sunni belief, but may not be completely accurate with respect to his status among the sahaba. (And I generally think Ali (ra) is underestimated by most writers.)
One entire, long section is on the infallibility of the prophets (as), which is a controversial point among ulema.
Claims that the Prophet (sas) knew Ayisha (ra) was innocent of allegations against her when she lost her necklace, but does not give any evidence. I'm not sure how you would then explain Ayisha's accounts of the incidents that followed unless you don't believe they are authentic.
There are also comments about the Prophet knowing the future (which is true in the sense that he knew some of what was in the future because it was revealed to him but could be misunderstood) and about being present (now) when people are praying. Also about the Prophet visiting graves (which he first prohibited and then later allowed as polytheistic practices around graves disappeared according to the author.) I don't know if this is true or not, but it is highly controversial and someone with more knowledge than me might find it objectionable.
Repeats the same stories and hadiths in places, and these are not really some of the most siginificant hadiths in the religion relative to others. For example, he cites a hadith about a woman being able to travel safely through the muslim lands alone without any fear except for wild animals three separate times in the book, which is a hadith about patience.
Refers to Allah as God throughout the book, which is not a problem for me, but might be for some people.