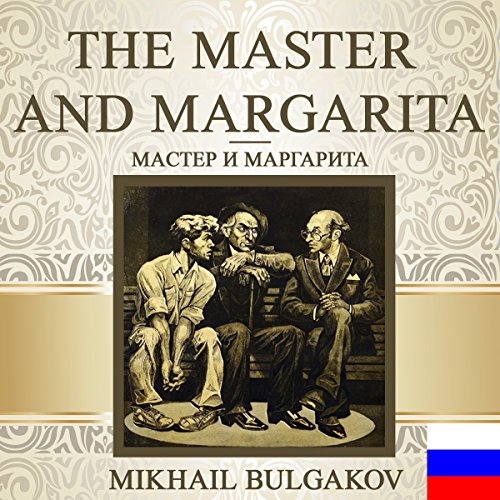 The Master and Margarita [Russian Edition]

Nothing in the whole of literature compares with The Master and Margarita. One spring afternoon, the Devil, trailing fire and chaos in his wake, weaves himself out of the shadows and into Moscow. Mikhail Bulgakov's fantastical, funny, and devastating satire of Soviet life combines two distinct yet interwoven parts, one set in contemporary Moscow, the other in ancient Jerusalem, each brimming with historical, imaginary, frightful, and wonderful characters. Written during the darkest days of Stalin's reign, and finally published in 1966 and 1967, The Master and Margarita became a literary phenomenon, signaling artistic and spiritual freedom for Russians everywhere.

Please note: This audiobook is in Russian.

What about Vladimir Ivanovich Samoylov’s performance did you like?

Samoylov did an outstanding job in portraying the characters! I haven't heard anything (anyone) better. it's like listening to a play on a radio!

Growing up in USSR i couldn't escape reading this book when at school It was a part of compulsory reading that we HAD to do. I personally think it was great idea, but WAY to early to get to the point and main idea of the book.
Now, decades later i keep reading it all over and over again. It is by far one of my favorite books. Every time i find something new for myself!

Highly recommend this version to all native Russians and people who can comprehend Russian language (Speech).

Greatest book ever written. The narrator is amazing. 5 stars on all accounts

This is one of the best books ever written. The narration is fantastic. Five stars on all accounts.

Amazing version of an amazing book. You owe it yourself to read/listen to this mind bending book

Loved this, great narrator with wonderful voices for all the characters. Would highly recommend to anyone, even if you've already read the book.

Read and listen over and over

It's absolutely amazing masterpiece. The words and sentences are so delightfully juicy and ironic. Bulgakov plays with the language extremely tastefully and graceful. The magic of reality and a reality of magic intertwined and not giving us even a second of rest or boredom. I was reading it on my tipy toes

This is a wonderful audioversion of a Russian beloved novel by a controversial writer. Bulgakov's writing style is literary, witty, and very engaging. The narration is very well done, extremely professional and easy to listen to if you speak Russian.

My father gifted this book to me about 40 years and I read it a few times. But every time I discover and experience something new. Nostalgia, enjoyment and appreciation for a wonderful story teller Mikhail Bulgakov.

I fell in love with “The Master and Margarita” ever since I first read it in my early teens and, having just re-read it (or, re-listened to it in an audio version, to be more precise - btw, the narrator did an absolutely fantastic job with it!), I realized that not only it is still my most favorite book ever, it’ll remain such for many more years to come. I read it (and listened to it) in its original Russian, and the first thing I have to mention is Bulgakov’s unparalleled ability to draw you in with his original storytelling and make you fall in love with the characters and get to know them so well, they eventually stop being “characters” but turn into close friends instead - Woland and co included.

Now, for the plot. Ah, the plot! It’s the most beautiful, tender, inspiring, and heart-wrenching love story ever written, with two lovers fighting against the world itself. Love stories such as Master’s and Margarita’s happen once in a million years, and when cruel fate separates the ones who belong together, the powerful forces themselves will appear on earth and wreak havoc on the whole city of Moscow just to ensure that the two lovers end up together. The power of the emotional attachment between our heroes is really hard to describe and you will have to read the novel for yourselves to know what I mean. One thing I promise, you’ll fall in love with them as well and will root for them till the very last page. “Love leaped out in front of us like a murderer in an alley leaping out of nowhere, and struck us both at once. As lightning strikes, as a Finnish knife strikes! She, by the way, insisted afterward that it wasn’t so, that we had, of course, loved each other for a long, long time, without knowing each other, never having seen each other…”

Woland and co. Enigmatic, powerful, cunning, and impossibly charming - all members of this… gang? Devil’s entourage? I’m not sure how to call them, but they’re indeed “part of that power which eternally wills evil and eternally works good.” As soon as they appear, the most inexplicable events start happening and all sorts of mischief cause troubles for the “respectable members of the society.” Only, the further you read, the less respectable such members appear, and the nobler our “evil-doers” turn out to be, and that’s the genius of Bulgakov’s storytelling - turning black into white and evil into good. Woland himself is a profoundly complex character and the more you get to know him, the more you start understanding his motives. “But would you kindly ponder this question: What would your good do if evil didn't exist, and what would the earth look like if all the shadows disappeared? After all, shadows are cast by things and people. Here is the shadow of my sword. But shadows also come from trees and living beings. Do you want to strip the earth of all trees and living things just because of your fantasy of enjoying naked light? You're stupid.”

And last but not least, is the setting itself. Moscow, having just recovered from the blood-shedding revolution and already turning back to its old ways of corruption, the desire of a good life, money, status - everything that shall never die no matter how many revolutions mankind puts itself through. Through the eyes of his characters, Bulgakov reveals all of these paradoxes - greed, cowardice, subserviency, manipulations - and places against them the idealistic writer who is a dreamer at heart and whose very life gets destroyed by all the pettiness and small-mindedness of the new Soviet society. The critics who destroy a magnificent novel just because it goes against their new policies, the literary society that has sold itself to the new powers - there’s no life for such a pure heart in this new world, and so, Woland must offer him and his beloved a new one.

I could write and write about everything that makes this novel such an unforgettable literary masterpiece - the novel within a novel, the most unforgettable characters, the setting that comes alive with every page - but you really should read it for yourselves to understand the beauty of it. An eternal classic, which I would highly recommend to everyone.

A Very creative story, in between little long and sometimes confusing. Liked the main characters!