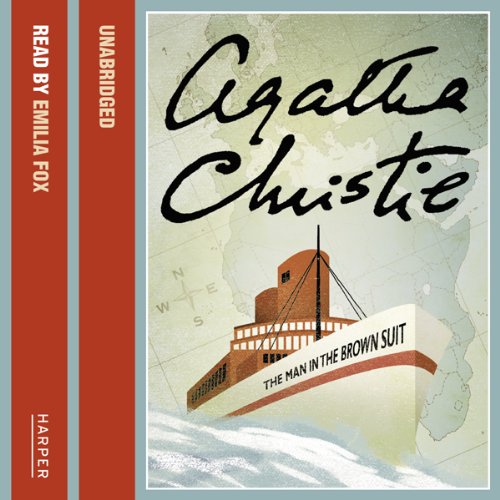 The Man in the Brown Suit

Another title in the ever popular Agatha Christie series. The suave and debonair Colonel Race must solve a question, not of ‘accidental death or suicide’, but ‘murder or double murder’. Pretty, young Anne came to London looking for adventure. In fact, adventure comes looking for her – and finds her immediately at Hyde Park Corner tube station. Anne is present on the platform when a thin man, reeking of mothballs, loses his balance and is electrocuted on the rails. The Scotland Yard verdict is accidental death. But Anne is not satisfied. After all, who was the man in the brown suit who examined the body? And why did he race off, leaving a cryptic message behind: ‘17-122 Kilmorden Castle’?

"The acknowledged queen of detective fiction the world over." ( OBSERVER)

Would you consider the audio edition of The Man in the Brown Suit to be better than the print version?

Definitly Yes! Emilia Fox smooth voice, wit and underlying humor makes you actually be on board of the ship and Africa.

Till the very end.

It's too hard to pick one out.

When Anne arrives in London to move in with her father's solicitor and his wife, she makes herself less attractive, so that the wife can feel herself a little bit more relax.

For anyone who would like to hear a fun, mysterious and romantic thriller, you are not going to be disappointed with the "Men in the brown suit".

Interesting story, and great heroine. A rather silly and dated romantic sub story tends to take away from, rather than enhance the plot.

not one of her best

As an unabashed Christie fan, I still have to warn you: this is definitely not one of her best. It's romance over mystery, third rate writing over detective suspense. An ok read, but only if you've read the others and are in withdrawal :)