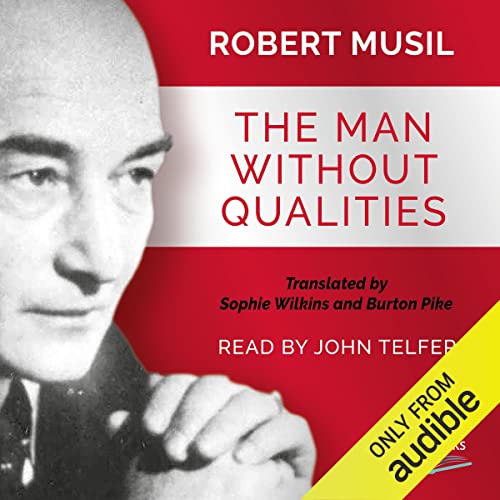 The Man Without Qualities

In 1913, the Viennese aristocracy is gathering to celebrate the 17th jubilee of the accession of Emperor Franz Josef, even as the Austro-Hungarian Empire is collapsing and the rest of Vienna is showing signs of rebellion. At the centre of this social labyrinth is Ulrich: a veteran, a seducer and a scientist, yet also a man 'without qualities' and therefore a brilliant and detached observer of his changing world.

A classic of the 20th century, Robert Musil’s The Man Without Qualities (Der Mann ohne Eigenschaften) is endlessly thought-provoking, insightful and stimulating. Part satire, part visionary epic, part intellectual tour de force, it is a work of immeasurable importance. In fact, The Man Without Qualities is one of the peaks of European modernist literature, along with Joyce’s Ulysses and Proust’s In Search of Lost Time, though with its own distinct character.

First and foremost, it is a novel where the ‘plot’ largely provides the riverbank down which the river can flow—fortunate with a work that, despite its considerable length, is unfinished! This may explain why it is less known, less read and less championed than its more famous peers, but those who do take the trouble to dive in are astonished. For a start, though often dense in content, it is generally accessible and often a delight to read—furthermore, it is both engrossing and fun. It is not surprising that Musil (1880-1942) was contemporaneous with Freud, whose psychoanalytic ideas emerge in various ways throughout the novel. So do the shades of Schopenhauer, Nietzsche and others who provide a philosophical backdrop—this is a great novel of ideas.

There are curiosities also, such as the sex-murderer Moosbrugger, who casts a dark but fascinating shadow over Ulrich’s society. And there is a variety of women with whom Ulrich interacts. There are girlfriends of passing involvement, such as Leona and Bonadea; there is Clarisse, wife of a close friend, and Diotima, seemingly a pillar of Viennese society. And his sister Agathe. They all act as challenging foils in any number of ways to tempt and undermine Ulrich’s sense of who he is.

Musil began writing The Man Without Qualities in 1921 and was still writing and revising it at his death (in Switzerland) in 1942. It is divided into three parts, which were published by 1933 though an English translation of all three parts did not appear until 1961. This recording features the latest (and exemplary) translation by Sophie Wilkins. In addition, it contains 20 chapters, prolonging part III, which were discovered in the mass of papers decades after Musil’s death. He intended to include them, but ultimately held them back for minor revisions.

This remarkable book, available for the first time on audio, is superbly read by John Telfer, who reflects the ‘decaying fin de siècle’ world as the Austro-Hungarian empire, and the old order, slides into oblivion.

One of the most important events ever in the world of audiobooks. In print this is two gigantic volumes of dense social commentary on the last days of the Austrian empire, and how many people are really going to get through that? But the audio simply takes you along on the journey, making it easy to glide through the less rewarding parts and spend time revisiting the chapters intriguing that you want to memorize every word. The reflections on the nature of modernity, relations between lovers, rationality and poetry, the human mind, and other profound questions mixed in with human stories and conversations really raise this above ordinary literature.
The narration is a good balance of the lively and engaging without being exaggerated or excessive. Very listenable.

One of the towering achievements of the modern novel. It remains unfinished. An abridged reading would give any listener a sense of the whole, but the whole is magnificently philosophical, post-romantic, modern, and urban. Not a single thing about it felt pastoral or lyric. As a view into the start of the horrors of the 20th century and beyond, unparalleled.