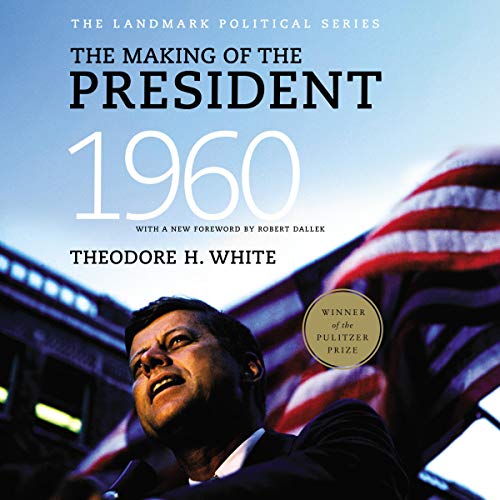 The Making of the President 1960

A Harper Perennial Political Classic, The Making of the President 1960 is the groundbreaking national best seller and Pulitzer Prize-winning account of the 1960 presidential campaign and the election of John F. Kennedy.

The Making of the President: 1960 revolutionized the way modern presidential campaigns are reported. Reporting from within the campaign for the first time on record, White’s extensive research and access to all parties involved set the bar for campaign coverage and remains unparalleled. White conveyed, in magnificent detail and with exquisite pacing, the high-stakes drama; he painted the unforgettable, even mythic story of JFK versus Nixon; and, most of all, he imbued the nation’s presidential election process with a grandeur that later political writers have rarely matched.

This book provides almost a real-time view of people and events surrounding the 1960. It presents contemporary portraits of Kennedy and Nixon as they were then and not from a revisionist historic perspective. The style and reporting is a little dated but that makes the book more valuable because it makes the history fresh. The narrator is a bit irritating- mumbles sometimes, get worked up in other places- and is a little distracting. To compare the men in the election of 1960 with those of the current 2020 election is depressing though. Regardless of which candidate you support in this election they seem to pale in stature compared to those running in the 1960 primaries and election.

From this book it appears that “party bosses” of 1960 had tremendous power. Of course how that power was implemented is not discussed. But the candidate surely needed their support

In 2020, it appears there are local party bosses that work in the shadows and can affect elections in ways people are unfamiliar Of course today with social media the secrets are harder to contain.