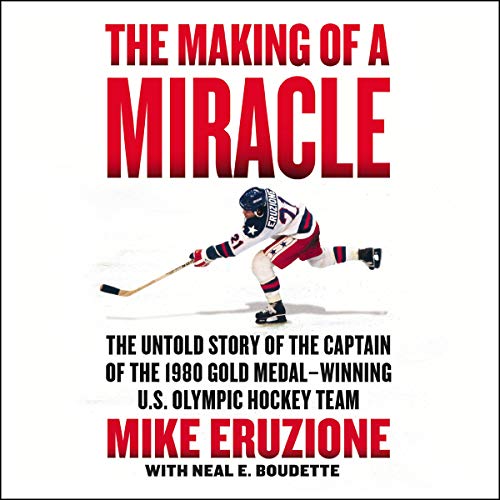 The Making of a Miracle

The Making of a Miracle

On the 40th anniversary of the historic "Miracle on Ice", Mike Eruzione - the captain of the 1980 US Men’s Olympic Hockey Team, who scored of the winning goal - recounts his amazing career on ice, the legendary upset against the Soviets, and winning the gold medal.

It is the greatest American underdog sports story ever told: how a team of college kids and unsigned amateurs, under the tutelage of legendary coach - and legendary taskmaster - Herb Brooks, beat the elite Soviet hockey team on their way to winning the gold medal at the 1980 Lake Placid Olympics. No one believed the scrappy Americans had a real shot at winning. Despite being undefeated, the US - the youngest team in the competition - were facing off against the four-time defending gold medalist Russians. But the Americans’ irrepressible optimism, skill, and fearless attitude helped them outplay the seasoned Soviet team and deliver their iconic win.

As captain, Mike Eruzione led his team on the ice on that Friday, February 22, 1980. But beating the USSR was only one of the numerous challenges Mike has faced in his life. In this inspiring memoir, he recounts the obstacles he has overcome, from his blue-collar upbringing in Winthrop, Massachusetts, to his battle to make the Boston University squad; his challenges in the minor leagues and international tournaments to his selection to the US team and their run for gold. He also talks about the aftermath of that stupendous win that inspired and united the nation at a time of crisis in its history.

Eruzione has lived a hockey life full of unexpected twists and surprising turns. Al Michaels’ famous call in 1980 - "do you believe in miracles? Yes!" - could have been about Mike himself. Filled with vivid portraits - from his hard-working, irrepressible father to the irascible Herb Brooks to the Russian hall of famers Tretiak, Kharlamov, Makarov, and Fetisov - this lively, fascinating look back is destined to become a sports classic and is a must for hockey fans, especially those who witnessed that miraculous day.

great book, interesting and fun to hear from the perspective of the team captain. totally awesome.

Like Mike says I remember where I was and the whole experience and joy that team brought to me.

This book really holds your interest and made me laugh many times too. My family is so much like mikes. He sounds like a good guy and did a fantastic job telling his amazing story of the miracle. Read it!!

The story was perfectly paced and gave me the feelings of both comfort and excitement in just the right way. I loved the background information about his family and how they shaped the athlete we know as Mike Eruzione as well as the glimpses into the lesser known games that brought them to the gold medal. Well worth the read for any fan but especially those who wondered about why the Captain chose to not continue with his hockey career.

Many hockey books are hard to listen to because the performer is too flat in the exciting parts or didn't do their homework regarding the pronunciation of names. This performance was the best I've heard for this type of story.

Brings back the emotions

As one who remembers where he was when The Miracle On Ice happened it was great to relive it with Mike Eruzione from his perspective. I highly recommend this book for anyone who "experienced" The Miracle on Ice.

I would give this six stars if I could!

I was 13 when the Miracle on Ice occurred and it was so exciting! The world seemed to be in turmoil (does that sound familiar?) and it rallied our society around a common goal (pun intended).

Love the way that Mike Eruzione tells the story of the 1980 US Men's Olympic Hockey team, in the context of sports, teamwork, and family. It's a great example of the American dream and really highlights the value of family and belief, both belief in yourself and in those around you.

I am a huge “Miracle” junkie, so I was very excited for this book. I enjoyed it well enough, particularly his stories about how he grew up. Good narration.

Love the story of the 1980 Olympic team. It’s so inspirational and never gets old. Nice to hear some of the behind the scene stories that I had not heard before from Mike’s point of you. My only complaint of the book is the person narrating it should’ve known names better and how to pronounce them. Some are butchered pretty bad. Doesn’t take away from the story though. Loved hearing it again!