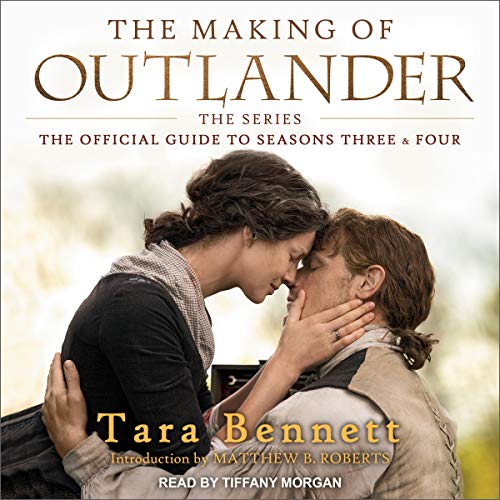 The Making of Outlander: The Series (The Official Guide to Seasons Three & Four)

From its very first episode, the Outlander TV series transported its viewers back in time, taking us inside the world of Diana Gabaldon's beloved series. From the Scottish Highlands, to the courts of Versailles, to the shores of America, Jamie and Claire's epic adventure is captured in gorgeous detail.

Now, travel even deeper into the world of Outlander with this must-have insider guide from New York Times best-selling author and television critic Tara Bennett. Picking up where The Making of Outlander: Seasons One & Two left off, Bennett covers seasons three and four, bringing listeners behind the scenes and straight onto the set of the show. You'll find exclusive interviews with cast members, including detailed conversations with Caitriona Balfe and Sam Heughan (on-screen couple and real-life friends), as well as the writers, producers, musicians, costume designers, set decorators, technicians, and more whose hard work and cinematic magic brings the world of Outlander to life on the screen.

This provided interesting insight and information about the series - things I never thought of before such as color choices beyond the obvious, use of the Black Sails set in Africa (another great series), and ways they used to convey the impact of the story beyond the acting. If you are an Outlander fan, you will find this interesting. But, you have to bear with the narrator. The reading sounds as though it is being done digitally through a robotic voice - very monotone with artificial-sounding inflections and awkward phrasing and emphasis. This is not performed at all. Too bad. It definitely detracts from the overall product, but again, the information is interesting if you are an Outlander fan.

Interesting if you like a look behind the scenes

I enjoy the Outlander series, so a look back at the episodes is fun for me. It is not a smooth read and instead feels a bit disjointed. Still, a true fan will appreciate the book.