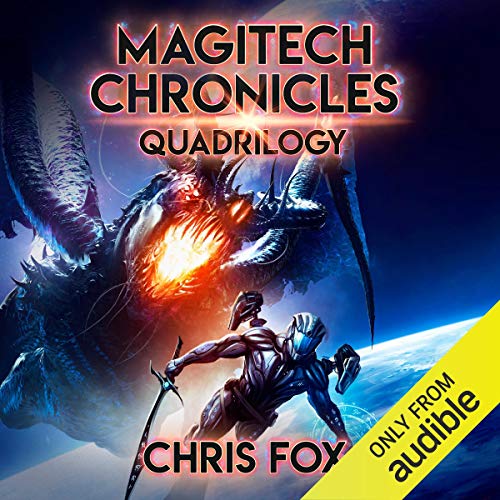 Aran awakens in chains with no memory. He’s conscripted into the Confederate Marines as a Tech Mage, given a spellrifle then hurled into the war with the draconic Krox and their Void Wyrm masters.

Desperate to escape, Aran struggles to master his abilities while surviving the Krox onslaught. Fighting alongside him are a Major who will do anything to win, a Captain who will stop at nothing to see him dead, and a woman whose past is as blank as his own.

Caught between survival and loyalty, Aran must choose. If he flees he will live, but the Krox will burn the galaxy. Stopping them requires a price Aran may be unable to pay: learning to trust the very people who enslaved him.

Disclaimer: I received a free copy of the audio book in exchange for an honest review.

Magitek Chronicles is a space marine story set in a Space Fantasy world. It has the normal military science fiction tropes but with elements welded in from fantasy. This is critical to understanding just what you are in for.

Some franchises I’ve enjoyed that do similar things include Star Wars, RWBY, Final Fantasy and Babylon 5.

If the idea of a space marine shooting a rifle that flings level 3 Void spells or a space dragon fighting capital ships fills you with delight then you are in the right place. Buckle up and enjoy the ride. All four volumes for one price is an insane value.

From the moment you are dropped into the world with an amnesiac hero, the brisk action keeps up a break neck pace to a rousing conclusion in the first book.

The second explains more of the world, mythology and develops the setting building up to another epic climax.
By the third and fourth books there is better balance of action and plot development. The threats, powers and spectacle keep ratcheting up and by the end the entire scope of the war elevates to something mythic. That’s right. Books 1-4 are great but the series is still ongoing.

There are plenty of swerves, surprises, revelations, prophecies, betrayals and more to constantly keep you guessing just what will happen next.

The characterization is interesting because the main characters have no memory. We get hints of who they might have been and we learn along with them as secrets are revealed, past actions they can’t even remember catch up with them and they have to choose how much of who they were will determine who they want to be.

The tone balances levity with mind blowing magic sci fi action. The use of weapons, armor, ships, spells, potions etc gives it nearly a LitRPG feel but not in a distracting way.

The spectacle alone is enough to recommend the book. I hope the rest of the series continues to deliver on its large promise. There is plenty to enjoy in this volume. It’s quite the ride and is never plodding or slow.

The narrator did an excellent job. His voice is clear, easy to understand and helps guide you along, even while pronouncing the names of strange demons, dragons and old gods. He balances a number of accents so well he makes it look easy.

There is some strong language in the books (1-2 F bombs in each book.) The action is irrepressible but never gruesome or gory. There is no explicit sexual content. I think your average teenager would be just fine with this series and would get a big kick out of it.

Looking forward to more in this world.

It's how not to write a book

As someone who enjoys writing fantasy as a hobby, I appreciate how this book has taught me several things about how NOT to write a novel, listed here:
1. Make magic so common place that it's no longer interesting.
2. Allow characters to advance in strength / ability without any significant sacrifices, just smooth sailing.
3. Make so many characters and worlds that the universe feels diluted.
4. Don't let the "villain" be proactive so the good guys have plenty of time to dally in peace.

Beginning shakes with a strong finish

Okay so let’s start with why I think some listeners had issues with the first few hours. Our author is following several main characters throughout different parts of the sector. Unlike George RR Martin who clearly states in chapter titles when their is a transition from perspectives our author does not. As u are new to the characters it makes the first few hours difficult to follow as some character transitions make you initially believe you are in the same perspective. This cleans up after the first few hours and book 2 makes it more clear adding in titles and clearly stating the character we are following in the first few perspectives.
Okay now to the series. It is an interesting concept on magic and tech put together in a space faring society. We have some societies that rely purely on magic and another society that is attempting to use tech and magic together. We follow several main characters in their battle against space dragons who are bent on conquering and subjugating the sector. I really enjoy how the author has mixed spell theory and technology. The character progression is also fantastic. I feel like their are a lot of GAMELit elements in the book without the amusing boxes. Well that being said, I believe anyone who likes space opera , dragons , gamelit, and magic will enjoy this book. I personally have added this series to an autobuy!

Firstly, don't think that this is Sci-Fi even if Audible put it in that section, this is clearly fantasy.
Writing is pretty simplistic 'Spell swords, spell armor, spell ships', reader tries their best but I get the feeling that even they find it tedious at times.

Also, I listen to a LOT of long sagas, but when you buy a 34 hour Quadrilogy you actually expect an ending, this one is too drawn out and you're left hanging. Seems they just release a 9 hr book for another credit and at least another in the works. I'm left feeling a little suckered.

Good Blending of Magic And Tech

This series blends magic and technology really well. So, if you enjoy both genres like I do you will most likely love this series.

Side Note: I thought since this came in a quadrilogy it was the whole series it is not to which I have mixed feeling... On one hand I wanted a complete series to listen to so I wasn’t waiting to continue it... On the other hand I am really enjoying the series so more books isn’t an all bad thing...

Sophomoric writing: Could have been better

The writing was one dimensional with no range of emotions. Every action was urgent. The story needs the characters to be fleshed out and reasons for their actions to be explained.

Dragon:"I will devour your soul!"
Protagonist:"Not today, wyrm!"
*facepalm*
It got better once the protagonists got going and established a proper repore with their enemies but in the beginning I could not stop rolling my eyes. It made combat feel like a joke.

And really? Four books and there's not even a dent in the main plot lines? I bought a quadrilogy and I still feel like my story is in another castle, and I only listened past the first book in hope that there would be a payoff but not really. I just assumed this was a complete series.

I didn't think I would like this turned out pretty good. I'm looking forward to the next buck.

Okay, part of it was greed for me. 34 hours on one credit!!!! Wow, worth the effort. But not really. I read the reviews, and they are, as you can find for yourself, mixed. Many say is the better than home-made pizza, others have some legitimate concerns; magic and space???? So I investigated. After about 7 hours of trying to care, I realized I didn't. Sorry, Chris Fox. Interesting idea, but I couldn't make it work for me.

I also wasn't enchanted by the narrator. I found his very young voice hard to listen to, and even harder to think it credible. So I will take a pass on this.

Tried for 4 hours but still couldn't get into it. Space. Magic. Battles. Space magic battles.