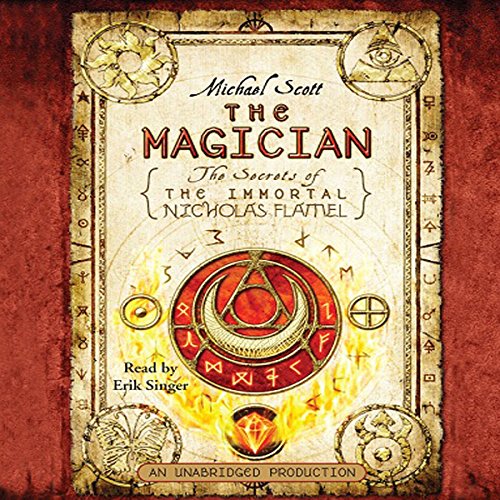 Nicholas Flamel appeared in J.K. Rowling’s Harry Potter - but did you know he really lived? And his secrets aren't safe! Discover the truth in book two of the New York Times best-selling series the Secrets of the Immortal Nicholas Flamel.

Their plan: Steal the rest of what Nicholas Flamel has fought to protect.

John Dee has the Book of Abraham the Mage, which means the world is on the brink of ruin. Except he's missing two crucial pages, pages that Nicholas, Sophie, Josh, and the legendary warrior Scatty have taken to Paris.

But Paris is teeming with enemies - and old acquaintances like Nicollo Machiavelli. On the run and with time running out for Nicholas and his wife, Perenell, Sophie must learn the second elemental magic: Fire Magic. And there’s only one man who can teach it to her: Flamel’s old student, the Comte de Saint-Germain - alchemist, magician, and rock star.

"The Secrets of the Immortal Nicholas Flamel has everything you loved about Harry Potter, including magic, mystery, and a constant battle of good versus evil." (Bustle)

Listen to the whole series!

recommended though narrator was switched

If Someone is looking into getting this book, I would go say for it as is the whole series. I am a very picky fantasy reader. I like coherent metaphysics and people you can genuinely care about or dislike. My one HUGE issue in the 2nd book is the narrator change. To be fair, I did not look to see if this was in response to any bad reactions to the first one, but I would be shocked it that was the case. Also, to be fair it can be said that the replacement is not bad. He is not even close to the other voice actor but I could listen to him. I voice my opinion because I listen to books on audio all the time and I thought book one's reader was truly gifted and he acted out all of the main parts with proper accents, adroitly. So I felt I had to posit my frustration at his loss when the series is so clearly a hit and can afford a quality voice actor. A really dumb mistake made in audio publishing all the time. I have dropped series altogether because 3 books into a series they bring on a horrible narrator. I simply find it appalling that they do not work harder to prevent such things from happening. At least in this book, you can deal with both narrators, or at least I could. So I would say if you liked book one, jump on in the water is fine. I just had to mention the switch of readers because I know that Audible knows the difference. They have made some amazing book on audio. I read "Tales of the Otori" and it was stellar and even more so on audio via audible. And my taste must be somewhat on as I am sure that "Tales of the Otori" series won several awards. Many actors truly do act out each voice and do it well. A good example is the first book in this series with Denis O'Hare. In short this is a good book well done in and it is good for older children meaning 14 and up 12 if your child is precocious There are great cultura references to real places in people that are great at stimulating interest in history.

disappointed that I can't bear the NEXT narrator

This series took a little getting into, and a few suspensions of disbelief - one of the most pivotal being the teenagers mistrust of their guide and guardian, Flamel - but if the more obvious literary devices are forgiven, the characterisation and action are fun - especially those centred on "the bad guys", who are given somewhat more than the typical 1.5 dimensions usually accorded those on their side. But all of the books' listenability and likeability hinge on the remarkable skill with which the first two narrators delivered the work. Both deftly delivered nuance and sincerity within rapid shifts of pleasantly believable accents - so WHY on earth were they dumped for the inconceivably AWFUL third narrator? He cannot manage a single complete sentence in a consistent accent, let alone a convincing one. I am deeply disappointed to have to leave my new found immortal, elder and humani friends hanging at the end of the second book, because from there on their adventures are intolerable to listen to. I would love to hear the rest of the series re-recorded if at all possible. Until then, I will have to - shock, horror - go and buy the remaining books and read them to myself. Very disappointed Audible, I would have expected better.

I wish this was real!

This is a worthy sequel to book 1 of The Secrets of the Immortal Nicholas Flamel. Good character developement and the wild pace continues. Wonderful setting in Paris, past and present. Too bad Denis O'Hare didn't continue the narration.

This is a great series for teen readers, introducing them to historical figured and events.

A Twist a Turn and a Web -- Must Read

If you love and hate suspense and bristle when foreshadowing goes against your desires, you’ll love this second installment of the series. I love the monsters and creatures and of course who can like Machiavelli? The novels so far have used trust as a central method for creating tension and conflict. I hope that that transmutes to something else in the future. The book was even better than the first because you feel like the good guys are at least trying to fight back instead of running around in shouts of exclamations. The number of characters in this book you like and hate grows in proportion to each other. My recommendation, start reading book three immediately – I have.

Least favorite of the 5 but still enjoyable.

This series may or may not be intended for teenagers or the youth. It is a nice fun series. I am a seriously avid reader, and finish a novel per week. I picked up the first book in the series for my daughter. I ran out of books and picked it up. I have read all of them now. They are fun.
The series has characters that are well wrritten and believable. The goals and problems are very truthful. Michael Scott has to have or had a few teenagers because he has them down pretty well in the books.
Now don't think you are about to read a literary masterpiece but the stories have heart, soul, well planned themes and flow, and realistic well described characters. I love a good book and these are just that. GOOD BOOKS

great book, very good narration, never gets boring, very creative author, its a teen book but i am in my 30's and i enjoyed it just fine.

Josh drives me bonkers! He did in the first bike also, but this one the author reminds me near continuously how obnoxious he is. I am glad he was finally awakened so that I don’t have to hear him complain about being different anymore. Curious what sort of not-thought-out and stupid things he’ll do with his powers. What a great imagination of people and creatures and abilities

This was an exciting book full of magic and wonder. However you also realize "gossamer," must be Scott's favorite word, considering how many times it was used. Good book overall.

I wish the voice for Mars was different, lower and more ancient sounding, that's how I always imagined it but otherwise amazing