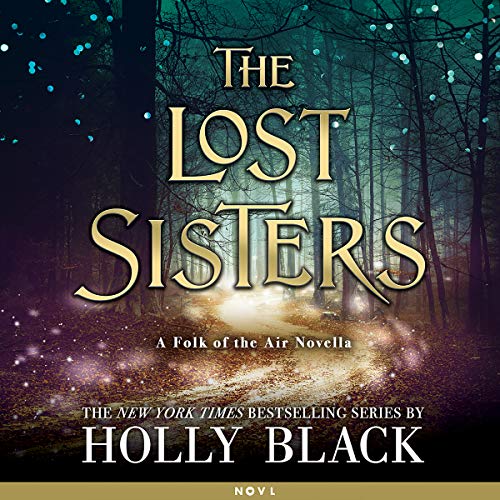 Sometimes the difference between a love story and a horror story is where the ending comes....

While Jude fought for power in the Court of Elfhame against the cruel Prince Cardan, her sister, Taryn, began to fall in love with the trickster Locke.

Half-apology and half-explanation, it turns out Taryn has some secrets of her own to reveal.

The Lost Sisters is a companion novella-length audiobook to the New York Times best-selling novel The Cruel Prince by master writer Holly Black.

I read this after reading an advanced copy of The Wicked King. I still hate Taryn... thanks for coming to my TED talk.

Post Scriptum: the fairytale at the being of the novella is the very best part. “Be bold, be bold... but not too bold”
#FairytaleTwists #Dark #UnreliableNarrator #tagsgiving #sweepstakes

A Bunch of Excuses!

I've never liked Taryn and now I really don't like her. This whole apology to Jude just sounds like a bunch of excuses to me. Taryn had a choice and she chose to do things that would hurt her sister- her twin- in so many ways. I still enjoyed getting the other side of the story, but Taryn just made me mad.

While this was interesting to hear her side. She kind of pisses me off. I want to hear Cardans side SO MUCH MORE. Or Madoc.

Loved the narration, excited for the actual sequel

I enjoyed listening to the "other side" of Taryn's betrayal; however, this novella just really got me excited for the sequel The Wicked King. I wanted more after finishing this novella! Holly Black is a phenomenal writer and she really pulls you into her stories!

As for Caitlin Kelly--she is a gem. One of the best narrators we have ever heard.

I know this book is supposed to let you see things from Taryn’s perspective so you understand her betrayal better. I still can’t stand her. Not worth the 1 audible credit.

The last sentence is a masterpiece! Perfectly written, perfectly performed, perfectly accompanied.👌 If for nothing else, that sentence MAKES this book.

“Fairy tales are full of girls who wait, who endure, who suffer. Good girls. Obedient girls. Girls who crush nettles until their hands bleed. Girls who haul water for witches. Girls who wander through deserts or sleep in ashes or make homes for transformed brothers in the woods. Girls without hands, without eyes, without the power of speech, without any power at all. But then a prince rides up and sees the girl and finds her beautiful. Beautiful, not despite her suffering, but because of it.”

I don't know how Holly Black does it, but I am eternally grateful that she does.

The perfect novella into the mysterious and often frustrating mind of Jude's twin sister, Taryn. Half apology, half explanation, all because of miscommunication. I loved this window into a different side of the story, one that I had been curious and angry about. Taryn is a tragic character, just like Jude. (But, I'm still on Jude's side, through and through.)

Still hate her next we need Cardan point of view

Locke is worst than I thought
Taryn is a proud
Surprisingly the only one how come out looking a little butter is Cardan, and I need his point of view!!!

Not sure it was worth the cost

The Lost Sisters provides Terayn’s side of events. The story was interesting and somewhat entertaining but it really didn’t progress the series arch. The story does however show Terayn’s selfishness and greed. It will be interesting to see if & how the marriage between her and Locke goes.

This was completely beautiful to listen too. The performance was incredible. The way it was written, also incredible. But it didn't make me like or even agree with Taryn at all. I still hate her. I still hate Locke as well. All this did was get me stoked for The Wicked King. but overall, I'd recommend it if you enjoyed The Cruel Prince.

Too short for the cost

It was just one letter read out, too short for half a credit, better to add it to one of the books as epilogue or proloogue

It is not needed for the story, but I do feel that it does explain the rift that came between the twins. And while it is truly simply a monologue, it's written and read very well.