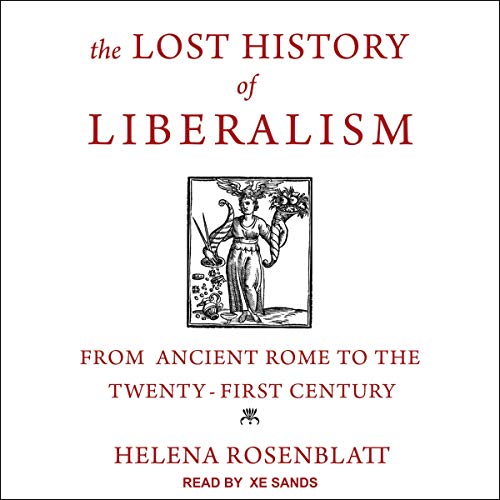 The Lost History of Liberalism

The Lost History of Liberalism challenges our most basic assumptions about a political creed that has become a rallying cry - and a term of derision - in today's increasingly divided public square. Taking listeners from ancient Rome to today, Helena Rosenblatt traces the evolution of the words "liberal" and "liberalism", revealing the heated debates that have taken place over their meaning.

In this timely and provocative book, Rosenblatt debunks the popular myth of liberalism as a uniquely Anglo-American tradition centered on individual rights. She reveals that it was the French Revolution that gave birth to liberalism and Germans who transformed it. Only in the mid-20th century did the concept become widely known in the United States - and then, as now, its meaning was hotly debated.

Liberals were originally moralists at heart. They believed in the power of religion to reform society, emphasized the sanctity of the family, and never spoke of rights without speaking of duties. It was only during the Cold War and America's growing world hegemony that liberalism was refashioned into an American ideology focused so strongly on individual freedoms.

Today, we still can't seem to agree on liberalism's meaning. In the United States, a "liberal" is someone who advocates big government, while in France, big government is contrary to "liberalism". Political debates become befuddled because of semantic and conceptual confusion. The Lost History of Liberalism sets the record straight on a core tenet of today's political conversation and lays the foundations for a more constructive discussion about the future of liberal democracy.

lack of analysis of what is liberalism, plenty of quotations though, but that doesn't make an essay deep

Narrator made the history of liberalism sexy

I love this narrator's voice and love the way she delivers the prose typical of academic nonfiction. Many narrator's read in an elevated, almost arrogant tone for "serious" political work. That approach is annoying. I wish this narrator did more nonfiction!

Interesting but in the end self-defeating

The book traces the use of the word liberal/ism through its use throughout western history and paints an interesting portrayal of some notable figures in the history of liberalism. The author also does considerable work to dismantle or nuance the unlucky distinction between modern and classical liberalism.

In the quest to shine a light on the continental history of liberalism however, the author inevitably falls prey to the same temptation as she argues plagues so much of the contemporary history of liberalism - to belittle or ignore notable works of authors and political thinkers outside of the preferred school or region. In some parts, the book verges in on the line of downright revisionism.

The author also portrays a typical straw-man of contemporary liberalism as an atomistic ideology hellbent on destroying social cooperation and morals, not unlike the ones she criticize for being unfair in historical portrayals of liberals.

The dichotomy between enforcing rights/ methodological individualism and a moral, pluralistic and empathic liberalism is obviously faulty and the book names more than a few thinkers who are known for this very idea, but whose ideas about this are outright ignored. (E.g. Smith, Mill, Berlin, Rawls and even Hayek)

In sum the book puts a spotlight on a number of interesting uses and characteristics of liberalism throughout western history, but the book is also severely flawed and in some sense self-defeating in itself being an example of a politicized history, and unjust critique of liberalism.