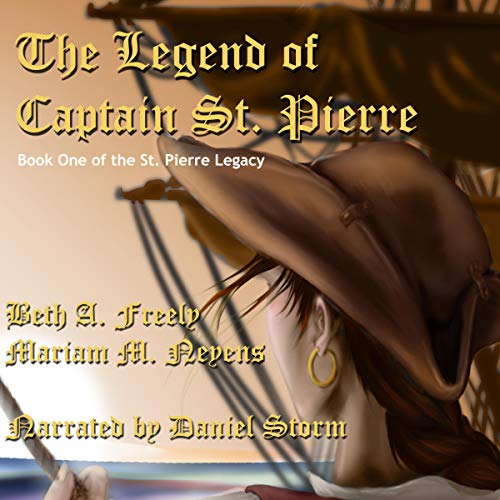 The Legend of Captain St. Pierre

There is more to the legend than meets the eye. And not even the most notorious pirate could prepare for the truth.

Twin sisters Igraine and Branwyn St. Pierre have been unwillingly perpetuating the legend of the infamous pirate Captain St. Pierre. Having lost their father Benoit St. Pierre at age 16, the sisters have been sailing the Spanish Main under the guidance of their guardian Zachariah Hammond, a cruel man who has forced them to do his bidding.

Now, they must fight to gain their freedom in a race against time. Will their nemesis bring their downfall, or is he the answer they need to break free.

The Legend of Captain St. Pierre is an exciting read filled with twists and turns that had me convinced I was on an actual pirate ship.

This author is new to me and I honestly wasn’t sure what to expect going in but by chapter one I was hooked. This isn’t a normal tale of pirates, this is a story of love, both romantic and learning to love yourself, of traumas and trials that so many of us deal with in our ways, and of making our own happy endings.

There are very heavy topics in this book including abuse, rape, and self-loathing to name a few but I thought the author dealt with them in a very conscientious and believable way.

There were a few small things that did catch my attention like tense changes from past to present and at times the dialogue got a bit wordy but they are all small complaints.

I listened to the Audible version of this book and the narrator does a fantastic job. Their accents and mannerisms were spot on and I felt fully immersed in the pirates world. I highly recommend this story to any fans of adventure and romance!

An Adventure on the High Seas

Igraine and Branwyn - Sisters, Twins, Sea Merchants and Pirates, keeping the legacy of their father, Captain St. Pierre, alive. But are they willing participants, or are they pawns in a game of treachery, politics and greed.

As they fight to uncover the truth, the sisters find there is more to the people in their lives than meets the eye. Will they be able to find what they seek to restore their Father's good name, or will they be destroyed by the people meant to protect them. A story filled with adventure and romance from the first page to the last.