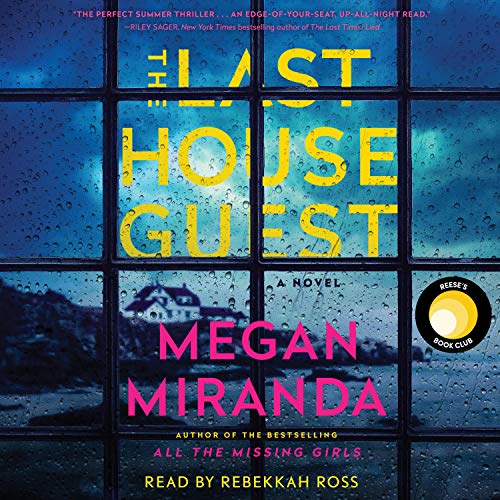 The summer after a wealthy young summer guest dies under suspicious circumstances, her best friend lives under a cloud of grief and suspicion in this "clever, stylish mystery that will seize readers like a riptide" (Publishers Weekly, starred review) featuring "dizzying plot twists and multiple surprise endings" (The New York Times Book Review).

Littleport, Maine, has always felt like two separate towns: an ideal vacation enclave for the wealthy, whose summer homes line the coastline, and a simple harbor community for the year-round residents whose livelihoods rely on service to the visitors.

Typically, fierce friendships never develop between a local and a summer girl - but that’s just what happens with visitor Avery Greer and Littleport resident Sadie Loman. Each summer for almost a decade, the girls are inseparable - until Sadie is found dead. While the police rule the death a suicide, Avery can’t help but feel there are those in the community, including a local detective and Sadie’s brother, Parker, who blame her. Someone knows more than they’re saying, and Avery is intent on clearing her name before the facts get twisted against her.

Another thrilling novel from the best-selling author of All the Missing Girls and The Perfect Stranger, Megan Miranda’s The Last House Guest is a smart, twisty listen with a strong female protagonist determined to make her own way in the world.

"A riveting read...from master of suspense, Megan Miranda," (Mary Kubica, New York Times best-selling author of The Good Girl) The Last House Guest is a smart, twisty listen that brilliantly explores the elusive nature of memory and the complexities of female friendships.

If you enjoy listing to your teen age daughter like, you know, tell a story... with conclusions that come from hardly, you know, like, anywhere... you’ll enjoy this narrative & narrator.

Poorly written, redundant details, drawn out storyline and simply boring. I stopped at chapter 10 and skipped to chapter 26 and missed nothing in the story development.

The narrator's annoying style to pause dramatically before every redundant phrase, "she said" was so annoying I could only get through a few chapters. I wanted to throw my headphones. The story was lost in too many adjectives and descriptive passages.

OMG this book was boring and difficult to follow. I really think that watching paint dry would be preferable to reading this novel.
The plot took forever to unfold and all the switching back and forth from present to past gets old really fast. Were it not for the fact that this is an audio book, I would have burned it. Can't will them all I suppose and I'm sure there are individuals that think this book was awesome.

One of the most poorly written books I have read

I have no idea how this book made it onto the NY Times list. The writing and grammar is terrible, the storyline is clunky, and the characters are poorly developed. Neither the central character nor the supporting parts elicit any empathy from the reader. This is not assisted by the audiobook narration, which is likewise terrible - flat, reedy and mispronounced in parts. Give it a miss.

This book was so boring & slow. It was such a struggle to get through. This is the third of Reese's book club picks that has been like this. I hope September's pick will be better.

Yikes I’m not sure what the other reviewers saw in this book. The narrator had such a dull monotone voice that I ended up spacing out and had to go back and listen to it all over again just to keep up with the story. The writer switched back and forth between the past and present with alacrity. After a couple hours, I gave up and skipped to the ending chapters. It turned out I didn’t really need to listen to the whole book to understand the ending.This book could’ve done with a good editing.

I enjoyed her first book. This one just droned on and on. I got to the fifth chapter and skipped to the last two chapters.

Man this book was boring. I normally really love her books and they’re typically very suspenseful but this one wasn’t at all. I barely even cared about what happened to the girl who may or may not have been murdered. It wasn’t compelling or thrilling and the twist wasn’t that surprising. It was just ehh.

This seemed compelling at first, but after the first hour it became disjointed, repetitive and boring.
The narration was terrible.
They definitely need a less child-like narrator with a more expressive voice.

would listen to it again

thrilling and interesting up to the last sentence

a very appropriate and nice voice