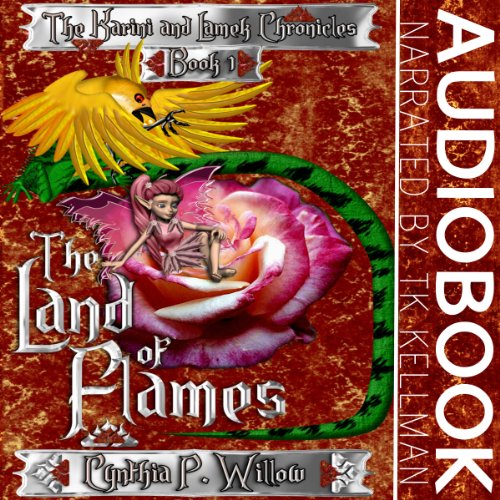 The Land of Flames

Enter a world of fairies, dragons, dwarves, and elves in The Land of Flames, a magical world where the possibilities are endless and truth makes a difference.

Ocamar, the villainous dragon king, and his dragon clan, have overtaken The Land of Serenity and everyone in the land is in jeopardy. The only hope seems to be with Rumbleflin, the oldest and wisest of the elves, who plans to lead an army rebellion.

To add to the conflict, Ocamar and Rumbleflin have been harboring secrets from one another for years, and what happens when those secrets are revealed will have a major impact on everyone.

Can an army of fairy-tale creatures defeat a clan of dragons and restore their Land of Serenity?

This audiobook was a pleasant to listen to.. I would recommend this audiobook for families looking for a family-friendly fairytale to add to their reading list. Recommended young children

great story, my boys loved it

My boys laughed several times at the characters and their witty/funny charms.

Have you listened to any of TK Kellman’s other performances before? How does this one compare?

I loved the narrator voice. It reminded me at times of Morgan Freeman. The only thing I didn't care for was the way he did Karini (the main fairy)'s voice. It was such a high falsetto, it sounded like he was attempting to be funny, even in parts when the storyline wasn't comical. But for my boys, it just added to the joy of listening to it. I also thought some of the special sound effects were very well done.

This was our second fantasy by Cynthia P Willow. I listened to the audio version in the car with my boys. The characters were very memorable, and my children laughed just about every time we had it on. They also have gotten into imaginative play based on the characters of the story. They are already begging for the sequel.

As a mom, I loved how excited my kids were about this story. Way to go, Cynthia P. Willow. Thanks for giving my kids something to spark their imaginations!

TK Kellman has an army of mythical characters in his head. He is a master at keeping them straight.

I really enjoyed the way that the story flowed. I was engaged every step of the way. The ending provided me with a cliff hanger that makes me want to listen to book two right now.

What does TK Kellman bring to the story that you wouldn’t experience if you just read the book?

I think that he his a fine actor. I am like the way that he act out each character. His range is amazing.

Harry Potter met How to train you dragon.

Apart from the amazing story, I love the way it is narrated, it seems every character came alive.

What was one of the most memorable moments of The Land of Flames?

When Lamek turns against Ocmar for his love, it shows the strength of love :)

Have you listened to any of TK Kellman’s other performances before? How does this one compare?

This was the first time, I heard TK Kellman's fantastic narration.

Instead of listening it at one go, I would love to break it into small parts, so that each part would be savored at most.

I would be looking forward to have more books from Cynthia :)

Fire is no friend

By names, voice and direct explanation, it is really easy to figure who the good guys are. My own theory, based on the size of the world, is that the dragons are really dragonflies, also that guess would require some small unicorns and skunks. The book makes a good preparation for tackling those big kid magic books, the ones about Harry. I am surprised at the cavalier approach to death, so minus a star.