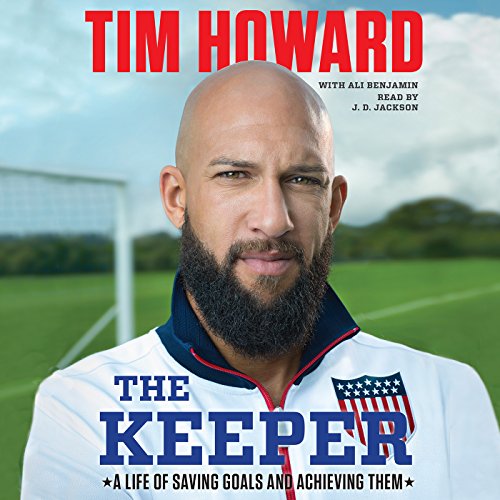 "I believe that we will win."

In the summer of 2014, Tim Howard became an overnight sensation after more than 10 years as one of America's leading professional soccer players. His record-breaking 15 saves for the United States national team against Belgium in the World Cup electrified a nation that had only recently woken up to the Beautiful Game after decades of hibernation.

An estimated TV audience of 21 million viewers in the United States - larger than those of the NBA and NHL finals - watched Howard's heroic performance against the heavily favored Belgians in which he repelled shots with his hands, feet, legs, knees, and even his signature long beard.

Suddenly an athlete who had toiled in relative anonymity for much of his career became the star of his own Internet meme ("Things Tim Howard Could Save": from Janet Jackson's "wardrobe malfunction" to the Titanic) and fielded personal calls from the likes of President Barack Obama ("You guys did us proud.... I don't know how you are going to survive the mobs when you come back home, man. You'll have to shave your beard so they don't know who you are").

In this inspiring and candid memoir, the beloved US and Everton goalkeeper finally allows himself to do something that he would never do on the field: He drops his guard. Howard opens up for the first time about how a hyperactive kid from New Jersey with Tourette syndrome defied the odds to become one of the greatest American keepers in history. He recalls his childhood, being raised by a single mother who instilled in him a love of all sports - he was also a standout high school basketball player - and a devout faith that helped him cope with a disorder that manifested itself with speech and facial tics, compulsive behavior, and extreme sensitivity to light, noise, and touch.

The Keeper is also a chronicle of the personal sacrifices he's made for his career, including the ultimate dissolution of Howard's marriage - a casualty of what he calls his "addiction to winning" - and its most painful consequence: his separation from his two children.

A treat for soccer fans, The Keeper will captivate even listeners who are unfamiliar with the sport but want to know what makes a world-class athlete different from the rest of us - and where that difference gives way to common ground.

There was a lot more to Tim Howard then I had first realized. This autobiography takes you through all the trials and tribulations of coming from humble beginnings, struggling from Tourette syndrome to playing in one of the greatest leagues in the world. Tim talks about the people he meet along the way that helped him make his dreams of playing professionally a reality. This book goes beyond that and dives into his personal relationships and also talks about the humanitarian work with NJ Center for Tourette Syndrome. Last but not least Tim talks about his time with the USMNT and the game that would forever make him a soccer legend. Win or loss it is all about the fight to overcome lives adversity's and never giving up. You do not have to be a soccer fan to be touched by this book. I would highly recommend.

Thought this was a really good book. Tim is an incredibly down to earth world class athlete and he does a great job of telling a lot of behind the scenes stories from a professional soccer player's perspective without sounding like he's trying to let you know how big time he is. Quite the opposite actually.

Not sure how interesting this would be for someone who isn't really into soccer and the nuances of the game as he gets into tactical details and the like that only someone who knows and really loves the game would be likely to care about, but any soccer enthusiast will love it.

The reader did a good job and I only took a star off for his mispronunciation of so many names of world famous "footballers", related clubs and organizing bodies. Otherwise he was easy to listen to and told the story well.

Being an old goalie from NJ, I had high hopes for this book. The tone was very familiar, traveling here, there and everywhere for games and tournaments. I had no clue about the TS, though. Tim's overcome quite a bit in his life to get to where he is and all of that hard work definitely paid off. This was a listen. On a side note, I really wish Harper Collins would start employing people more familiar with the content to read these books. Listening to them butcher some of the names and places is just like nails on a chalkboard to me. And this is, by far, not the first book I've listened to with this same problem.

Enjoyable book for our family!

We listened to this book on a road trip with our 6-year-old son who loves soccer, struggles with ADHD, and wants to be a keeper. It was a motivating story for him and he was able to listen to the entire book without becoming bored or distracted. My husband and I both enjoyed the book as well, and I am not a soccer fan and knew very little about Tim Howard or soccer in general prior to listening to this book.

Great for any soccer fan

I was pleased with how much strategy and inside information he talked about which was interesting to me. Any casual fan would enjoy as well. Great story that really raised my interest in him as a player.

If you could sum up The Keeper in three words, what would they be?

What about J. D. Jackson’s performance did you like?

He was very clear and easy to listen to, he went quickly through the story and didn't seem to pause unnecessarily. He made the story more fun to listen to than if the story had been just on a page.

This book is a great. I personally have some mental issues that I work against/with however you'd like to say it. One of them is a high anxiety and hyper-vigilance (which means you're looking for threats everywhere constantly) and the way my mind works is well described in this book. It's a different ailment, but you can hear his explanation of his working with his OCD and you can feel the compulsions I have being explained on how I must be checking for threat. That made this book touch me closely to start... then, we talk about the game!

As a youth, I played the game. I went on to play football when my size began to grow and grow and football called my name. My family has always been big into soccer. Both my brother and I have bought shares of Manchester United as our favorite club so we could call ourselves owners (it's dumb but really fun) and when we watch a match together we call it "an owner's meeting". Both my younger siblings played at the college level and did well in my opinion! The love of the game runs deep with us and seeing it from another unique perspective is really fun.

As a US Soccer fan, some of the goals were so well described that I had to go straight to a certain online video watching site and watch those same highlights again. Loved that. Absolutely got CHILLS listening to some of them. Being that the World Cup was less than a year ago, I can remember where I was and what I was doing while watching those games. Well, I was in my living room and I was slamming my Brazuca Ball into the ground praying, hoping, screaming, what have you at the screen while the games played out.

Great read for so many reasons, great listen for those of us that can't take time to read because we got lots of stuff to do with our hands. I'm an artist and draw and listen at the same time. Try it!

So exciting to learn the inside perspective !

Very poignant comments about family, Tourette's, and USA soccer. We have the Fathead graphic of Tim Howard storming down the hallway in our pediatric neurology clinic as s inspiration.

Excellent story of courage and determination!

Tim Howard shares a story of family love and support through what could have been a debilitating diagnosis to the courage and determination to excel. His recounting of his soccer career and game situations is captivating. His description of his mother's care and his love for his children as he becomes one of the best American soccer players ever makes this an encouraging and important book. I highly recommend it!