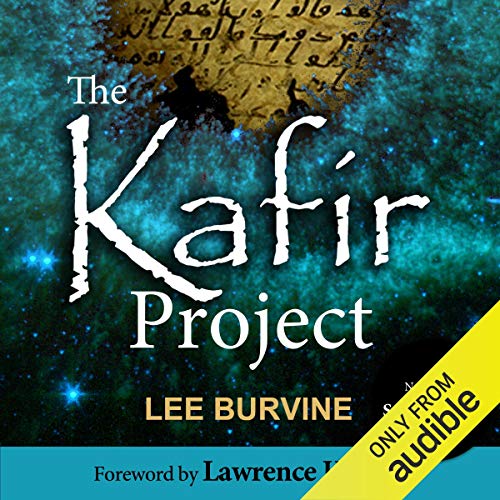 Astronomer and TV science guy Gevin Rees just landed the interview of a lifetime with the world's most famous physicist. Remarkable, because the eccentric genius is notoriously reclusive, and he's already dead.

What happens next forces Rees to run for his life from not one but two deadly assassins and global powers desperate to bury what he's just uncovered. Mind-blowing technology and solid evidence that would rewrite religious history and challenge the faith of billions.

I discovered this audiobook for the first time via Seth Andrews’ « The Thinking Atheist » podcast. I’m glad I gave the book a shot. I liked how the plot seemed realistic and the characters relatable. I recommand it.

This was my first book by Lee Burvine. I found it well written and it wove an engaging tale sprinkled with science and history that kept me in the story. The narrator, Seth Andrews was a superb choice. I could listen to that man read a phone book with a voice so smooth.

What disappointed you about The Kafir Project?

The sci-fi concept referenced by the title was merely the McGuffin of a mediocre intrigue plot and not a central part to an actual sci-fi story. It could have just as easily been the secret formula for Coca-Cola that the action revolved around and the story wouldn't have changed at all.

What was most disappointing about Lee Burvine’s story?

Aside from missing its opportunity to focus on the myriad of possibilities of what happens when the actual events of religious history are revealed, the story was instead a series of repetitive episodes of the protagonists being pursued, captured and escaping from bad guys.

Seth Andrews was good with the character dialogue but the non-dialogue portions of the story sounded more like the movie commentary for hearing impaired audiences than it did normal story-telling.

What character would you cut from The Kafir Project?

The various evil operatives and Burvine's painful digressions into their motivations and psyches. Conspiracy theory elements of the story could have worked better if the threats remained more shadowy. Burvine instead overly detailed his bad guys going so far as to give them back stories and switch parts of the narrative to their point of view. They held up the plot more than advanced it.

Arthur C Clarke's "The Light of Other Days" is a much better sci-fi novel on this topic. It actually explores the ramifications and reactions to the central sci-fi concept.

What did you love best about The Kafir Project?

Yes, but didn't have the opportunity

If you like the Dan Brown (Angels and Demons) mix of fact and fiction I expect you'll like this too. I've heard better stories but this is really good and the action just comes back to back. I do love that there are times in the story where the author could have added another action scene and the characters braced themselves but it passed as just a coincidence like so many experiences we have everyday.

everything about this book was amazing. To top it off my favorite podcast host Seth Andrews read it.

Seth needs to read more books. This store moves fast and I hope another book is coming soon!

I just can't get into it

I can only get a few chapters in before I just give up. I've tried to listen and read the book several times and I just can't get into the characters or the story.

Minimal character development. Story moves forward, but lacks the details that would make it feel plausible. Narrator is wooden. Very little emotion or character-voice difference. Overall, a combination for a boring "read."

Very Interesting take on religion and science. Sometimes hard to follow but well worth it.

Amazing storyline and main protagonists you want to be friends with. Would recommend. Hope to see more from this author