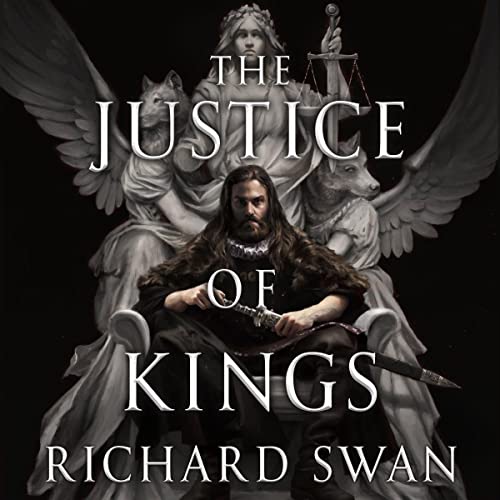 The Justice of Kings

From a major new debut author in epic fantasy comes the first book in a trilogy where action, intrigue, and magic collide. The Justice of Kings introduces an unforgettable protagonist destined to become a fantasy icon: Sir Konrad Vonvalt, an Emperor’s Justice, who is a detective, judge, and executioner all in one. But these are dangerous times to be a Justice....

“A fantastic debut.” (Peter McLean, author of Priest of Bones)

The Empire of the Wolf simmers with unrest. Rebels, heretics, and powerful patricians all challenge the power of the Imperial throne.

Only the Order of Justices stands in the way of chaos. Sir Konrad Vonvalt is the most feared Justice of all, upholding the law by way of his sharp mind, arcane powers, and skill as a swordsman. At his side stands Helena Sedanka, his talented protégé, orphaned by the wars that forged the Empire.

When the pair investigates the murder of a provincial aristocrat, they unearth a conspiracy that stretches to the very top of Imperial society. As the stakes rise and become ever more personal, Vonvalt and Helena must make a choice: Will they abandon the laws they’ve sworn to uphold, in order to protect the Empire?

"A marvelously detailed world with an engrossing adventure from a unique perspective." (K. S. Villoso, author of The Wolf of Oren-Yaro)

Give it a try. Doubtful you'll regret it.

There was a lot to enjoy about this book. The pacing was a slow build, but done really well. The choice of using the clerk as narrator gave a good twist to the styling of the story. The magic system applied is well thought out, we'll used, and maintains a decent balance as to not become an overpowering factor in the story. Small applications of magic go a long way in making a good story into a great story.

We only touch on a portion of the world being built in this story, but the narrative has given us a glimpse at something with a lot of potential. As a reader, the learning style is more of a show than tell which is also a plus in my opinion. The voice of the story isn't treated like she just came out of a coma and knows nothing of what's going on in the world.

It may take a bit to invest yourself into the characters, but there will be a point when it does happen and the story will be that much better for it.

The narrator is on point with her voicing. She does a great job at keeping characters distinct from one another and really gives the story life.

I don't usually like first person retrospective narrators but there is a real feeling of regret and youth that is gone in this book that makes the tale very bittersweet. The narrator is excellent and the story itself is first class. The world feels like a late dark ages in Europe setting with intrigues and plots galore. Each main character is believable and interesting and the author does not hold your hand with paragraphs of exposition.

My one small gripe is that there are several decisions made by main characters that feel unduly stupid - that feel not believable in t he context of the story.

You know how the graphic for folding space is a folded piece of paper with a pencil stabbed through it? Well this story is the pencil and the folds are historical events and philosophical movements. The whole of it is peppered with interesting characters and mysticism.

The narrator is in my top 2 female audiobook performers. This is not an easy read and she's brilliant.

Looking forward to the next in the series.

Best fantasy I've listened to in a long time

I love this. Great story, perfect narration. I loved the set-up, with the narrator being the apprentice to the justice, which is basically a travelling judge who has magic. The story itself is about them solving a murder in a town, but there are a lot of political and magic things going on behind the scenes, so they get in deeper than they thought.

This is book 1 in the series, but it has a great, satisfying ending while still leaving the path clear for the rest of the trilogy. Highly recommended.

Good but not great.

As other reviewers have pointed out, this book takes awhile to get going. I considered quitting a few times, but it was just interesting enough to keep going. The book does improve in the second half, but even when completed I didn’t consider it a great book.

The narration, like the book, took me awhile to get into. The narrator has a nice voice, but doesn’t have a lot of variations in character voices. I got used to it about halfway through. This may have played a part in the overall difficulty of getting into the book.

Overall, I would say this book is a solid ok. I enjoyed it, but it could have been better. I’ll consider moving on with the series in hopes it improves, but I’m not sure.

Looking to the Future

The book was PAINFULLY slow and once it reached it's climax, I didn't feel a great deal of anything. The performance was great, but the story sets up (a little bit) something to look forward too. There were characters in the book the author would like you to care for, but honestly I could care less about them and they were supposed to swing the story and be this massive shift.

Honestly, I think this book is much shorter than it needs to be and should have been longer and maybe JUST maybe, it would have been better.

absolutely loved everything about this book. only down side os the series is only starting so long wait for next fix.

I really like this book. Solid new fantasy story and world, with interesting characters. The narration seems just a tad bit fast, I turned the narration speed back to .9, but it’s a pretty small gripe. 4/5. Worth your time. I’m excited to read/listen to more stories with these characters.