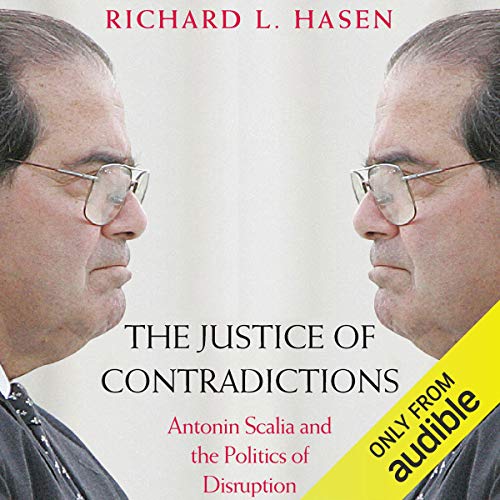 The Justice of Contradictions

Engaging but caustic and openly ideological, Antonin Scalia was among the most influential justices ever to serve on the United States Supreme Court. In this fascinating new book, legal scholar Richard L. Hasen assesses Scalia's complex legacy as a conservative legal thinker and disruptive public intellectual. The left saw Scalia as an unscrupulous foe who amplified his judicial role with scathing dissents and outrageous public comments. The right viewed him as a rare principled justice committed to neutral tools of constitutional and statutory interpretation. Hasen provides a more nuanced perspective, demonstrating how Scalia was crucial to reshaping jurisprudence on issues from abortion to gun rights to separation of powers. A jumble of contradictions, Scalia promised neutral tools to legitimize the Supreme Court, but his jurisprudence and confrontational style moved the Court to the right, alienated potential allies, and helped to delegitimize the institution he was trying to save.

This book is not a biography of Antonin Scalia (1936-2016) but a scholarly examination of Scalia’s jurisprudential legacy. Hasen discusses the two methods of interpreting the Constitution and statues that Scalia claims to have developed, textualism and originalism.

Hasen is a professor of law at the University of California Irvine. The book is well written. Hasen supports his critique with analysis of pertinent cases and legal commentary. The author clearly explains the fundamental theoretical and practical weaknesses so a lay person, like me, can understand it. Hasen questions the approach by Scalia in a scholarly manor. I found it particularly interesting when Hasen pointed out the different interpretations between Thomas and Scalia as they both are originalist. I think this book is written primarily for the legal profession, but I found the academic analysis of textualism and originalism interesting.

The book is eight hours and five minutes. Jessie Einstein does a good job narrating the book. It is my first time listening to this narrator. He is an actor and award-winning audiobook narrator.

Fantastic story about a fanatical

One might expect a book about judicial history and legal philosophy to be dry, but Hasen's "The Justice of Contradictions" is anything but.
I don't think anyone would doubt that the late Justice Scalia's reputation as the most caustic and divisive (and Schadenfreude-driven, I'll add) is well deserved.
DISCLOSURE: In my opinion, Scalia was Trumpian before Trump became president. He was a wealthy elite who acted as if he was "one of the people," despite lacking empathy for victims of injustice. He was a big mouth with narcissistic traits who had contempt for gays, minorities, and others who were denied due process and equal protection under the laws because the states' tyranny of the majority had decided these groups should be isolated, stigmatized, ostracized, and denied the inalienable rights they should have equally had.
DISCLOSURE TWO (and TOO): "Originalism" is a make-believe judicial philosophy used to cut off discussion when judges and justices like Scalia (and Gorsuch and Kavanaugh and...) have already decided cases' outcomes based on their own biases and political affiliation. By citing "originalism," they can lie to others (maybe themselves too) that they are obligated to rule in a certain way, which is absurd, really, given, as Hasen notes, the great number of times "originalists" disagree on case resolution and the reasons why they came to such a conclusion using "originalist" thinking.
Hasen treats Scalia gently, sincerely asking if Scalia personally despised gay lives or if "originalism" brought him to inequality for gays for purely objective reasons. To me, the answer is the former. Indubitably. Scalia once asked a public assembly of his fans: "If we cannot have moral feelings against homosexuality, can we have it against murder?" His auto-response shows a man -- well-known for his commitment to Roman Catholicism (his son is a priest) -- who gladly tramples the Establishment Clause, wrongly equates sin with immorality, and denies gays' innate dignity and respectability. And his fans, assembled in that room and worldwide, cheer his degradation of gay lives and amplify their own efforts to deny gay rights. Scalia gave them validity.
In his Lawrence dissent, Scalia wrote: "[T]he so-called homosexual agenda, by which I mean the agenda promoted by some homosexual activists directed at eliminating the moral opprobrium that has traditionally attached to homosexual conduct."
Also, "Many Americans do not want persons who openly engage in homosexual conduct as partners in their business, as scoutmasters for their children, as teachers in their children’s schools, or as boarders in their home. They view this as protecting themselves and their families from a lifestyle that they believe to be immoral and destructive. The Court views it as 'discrimination.'”
These are the words of a proud bigot who sees gays (and other "unpopular groups") as the rightful victims of religious intolerance and discrimination, not protected by the 14th Amendment, deemed illegal in their very existence by mob democracy. This is a man who defies the knowledge that discrimination based on identity is ALWAYS irrational and should find no quarter in law. Scalia's strong opinion that groups can be rightfully marginalized in democracy, which our nation is not, and their sole recourse is to wait for the blessed day -- if it ever comes -- when the majority finally decides to relieve their oppression.
More subtly than I could, Hasen brings such issues to light and proposes that "originalism" is a conservative ploy to achieve judicial activism without debate.