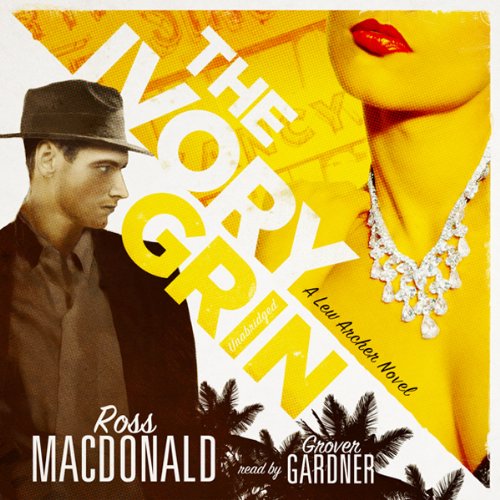 If any writer can be said to have inherited the mantel of Dashiell Hammett and Raymond Chandler, it was Ross Macdonald. Between the late 1940s and his death in 1983, he gave the American crime novel a psychological depth and moral complexity that his predecessors had only hinted at. And in the character of Lew Archer, Macdonald redefined the private eye as a roving conscience who walks the treacherous frontier between criminal guilt and human sin.

A hard-faced woman clad in a blue mink stole and dripping with diamonds hires Lew Archer to track down her former maid, who she claims has stolen her jewelry. Archer can tell he’s being fed a line, but curiosity gets the better of him and he accepts the case. He tracks the wayward maid to a ramshackle motel in a seedy, run-down small town, but finds her dead in her tiny room, with her throat slit from ear to ear. Archer digs deeper into the case and discovers a web of deceit and intrigue, with crazed number-runners from Detroit, gorgeous triple-crossing molls, and a golden-boy shipping heir who’s gone mysteriously missing.

“Macdonald’s spare, controlled narration, built for action and speed, conveys the world through which the action moves and gives it meaning, [bringing] scene and character, however swiftly, before the eye without a blur.” (Eudora Welty, New York Times Book Review)
“Archer-Macdonald are working together at their peak, piecing together a most modern American tragedy, making literature out of the thriller form, gazing more clearly [than] ever into the future as it rolls through the smog.” ( Newsweek)
“Ross Macdonald must be ranked high amongst American thriller-writers.” ( Times Literary Supplement)

A classic that still works

Some of the classic mystery/thrillers really dont make it or seem very dated today but this one holds up with time.
The writing is old school hard boiled but does not come of corny. The wordsmithing is vintage greatness.
Very well performed and a plot that holds up with time there isnt a false note here.
I read of all Ross MacDonald in print years ago and look forward to listening to them all again.

Good As It Gets

Great plot and characters. Intelligent and witty. You won't want to stop listening. McDonald is an absolute master.

Everything one could hope for in a Gumshoe Noir.

Ross MacDonald remains in the ranks of Chandler and Hammett when it comes to the classic Gumshoe detective novel. McDonald's story line, while elaborate, is easily understood. His descriptions are almost poetic in their imagery. I highly recommend this novel.

Where does The Ivory Grin rank among all the audiobooks you’ve listened to so far?

Ross McDonald is one of my favorite author's and Grover Gardner did his creation Lew Archer justice. The plot is strong, and the narrator captures Archer's world-weariness. Highly recommended.