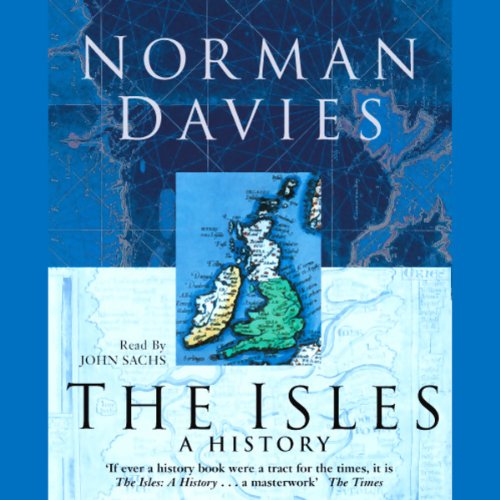 Here is the best-selling and controversial history of the British Isles, including Ireland, from the author of Europe: A History. Emphasizing long-standing European connections and positing a possible break-up of the United Kingdom, this agenda-setting work is destined to become a classic.
© Norman Davies; (P) Macmillan Publishers Ltd

"A historiographical milestone." ( Sunday Times)
"If ever a history book were a tract for the times, it is The Isles: A History...a masterwork." ( The Times)
"A book which really will change the way we think about our past...marvellously rich and stimulating." ( Evening Standard)

Good if you know what you're getting

"The Isles" may annoy some readers because as a history of the British Isles it can feel incomplete, and it can be perceived as sneery toward the British. Unfortunately this abridged audiobook misses out Davies's introduction, in which he explains his aims. The point of the book is to be a history of the ideas of Britishness, Englishness, Irishness, Scottishness, etc. It explores where these ideas originated, and how they have developed and changed over time. For this reason, it deliberately avoids the traditional way of writing about British history (which often describes the political union of the islands as natural and inevitable), and also avoids the sentimental Celtic reading of history (in which the division between the English and the Celtic nations is seen as timeless and unchanging).

The result is a history of the Isles that deliberately complicates supposedly simple concepts like 'British'. The best example is the way Davies insists on referring to the kings of the Isles by the names they called themselves - so you get Edouard I, Henri II, and Robert le Bruce as a constant reminder that these English and Scottish heroes spoke French. There's also an opening section on prehistory in which he refuses to call the islands 'British' until the word British has been invented, making up names (like 'The Great Isle' and 'The Green Isle' for Great Britain and Ireland).

All of this works well in an audiobook, and the always reliable Andrew Sachs is a perfect narrator. The story does seem rushed at times (especially in the 19th and 20th centuries), but there were no glaring gaps in the abridgement, except for the introduction. The history is mainly concerned with kings, prime ministers, power politics and the politics of nationhood - there isn't much social history.

This is a very good, absorbing listen, and will make you rethink your understanding of history at times. You do however need to understand the book's aims, or you might be disappointed.

I got this as a companion to the physical book. started listening became aware matter was missing. Glad I was able to return it. I will definitely check closer next time.

Great info that is clear and concise. Good choice for those who know little about the UK & Ireland or desire a refresher text.

What was most disappointing about Norman Davies’s story?

Davies has done brilliant work in the past, and relishes in debunking complacent opinion. Here, instead, he has written a history for BBC TV. Britain emerges Great, triumphant, only improved by its travails. All the imperial losses - US independence, the millions dead in the partition of India, Soros (alternately "an American" and then "a Hungarian") breaking the Bank of England) are attributed to individuals' errors, none of these catastrophes sprung from social forces, economics, the national arrogance, etc.
Half the book is the standard monarchical history of who begat and supplanted whom, alternating England, Scotland, Wales, and Ireland to show their equivalence, but there is no sense of why and next to nothing in the way of geographical, geological, economic explanation of developments, nor any other explaining. The royal ties to Europe are cited repeatedly, with little mention of European machinations in Britain beyond the invasion attempts.
Speaking for the new British everyman, now worldly enough to enjoy Indian food, European beaches, and the Irish, Davies even brings Princess Di onstage, to warn the royals that their high-handedness will not be tolerated, in the name of the people.

Davies is good, some of his choices here aren't

I've been a Davies' fan for years and I generally appreciate his somewhat idiosyncratic approach to history. But his angles are sometimes too obvious and occasionally pointlessly peevish. Such is the case with referring to medieval British monarchs with their French names. Yes, Norman, we get it - Henry II spoke French and was certainly called Henri in his lifetime. But they are monarchs of an English-speaking nation that has primarily spoken English for over 600 years and your English-reading and (in this case) listening audience aren't benefited by having to play along with the petty pedantry of figuring out that Jean sans Terre is John Lackland and so forth. Detracts significantly from the aural experience of an otherwise engaging work.

a lot of interesting historical facts and provided me with a lot of the questions I had although at times I found it very difficult to follow without a map and names of people and places just seen the pop up out of nowhere and I had no idea where they were for who they are.

Not quite what I had hoped for

This was a quick pass over a topic that requires many times the length of the book. I am an American with public school training, which means I have been taught next to nothing, but have invested many thousands of hours into private history study. I will probably listen to it again down the road but am getting a 45 hour book on the same topic to better grasp the material. A stronger (less British) voice will hopefully help. I have read the author previously. In this instance, he erred on the side of factual rather than entertainment and insight, and stayed on pace to finish one of the most important segments of human history in nine hours.

Would you recommend The Isles to your friends? Why or why not?

Most of my friends would have found the format dull and hard to follow.

The British proper accent may not have been the best choice for this particular book--at least for Americans.

Was The Isles worth the listening time?

Overall, I have no regrets but want greater understanding and insight than the quick pass over gave me.

Would you try another book from Norman Davies and/or Andrew Sachs?

What was most disappointing about Norman Davies’s story?

superficial, didn't breathe any life into it.

too off-hand, i was looking for a meatier, more solid book

What character would you cut from The Isles?

not a fiction book

weak writing, indifferent narrator. Can I get a refund? I can't get past the 2nd chapter.