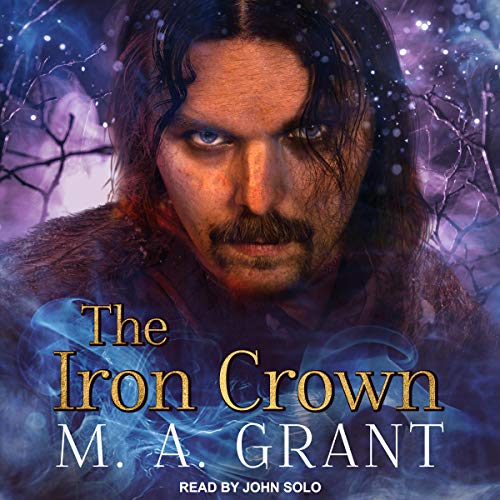 After the last Faerie Civil War, the leaders of the magickal pantheons stripped the shining Seelie Court of its power and tasked the dark Unseelie Court with maintaining the natural balance of the world. Ages later, a twisted intrigue throws the balance of all Faerie into ruin and ignites a new civil war.

Discounted by his family and haunted in the Unseelie sidhe, Queen Mab's youngest son, Lugh, leads the Wild Hunt on quests across the dangerous Wylds. At his side is his best friend, Keiran, a Viking rescued from death centuries earlier. Between Lugh's uncanny gift for being in the right place at the right time and Keiran's power of persuasion, they're revered across the Wylds - as long as Lugh keeps his true identity hidden from the people of the Sluagh.

I’m not sure why of the three books in this series, the performance of this book was exceptionally distracting.

There are three attributes that kept pulling me out of the story:

1) Over 70% of the book is performed with the gruffness and airiness of the 90’s Batman TV comic. The creators of this audio book failed to realize that many of us will listen to the story through earbuds, headphones, and/or in a car. I am used to adjusting the volume or pressing pause when a large truck or train passes by, but the presence of a normal car or an air conditioner drowns out the 20% of the book that is completely whispered.

2) In a similar vein, the performer delivers nearly every line as if it the most important dramatic moment of the story. The ebbs and flows of normal speech are present for the most part, and the performer avoids the trap of sounding like an actor who listens to themselves as they speak. But... there... are... so... many... lines... with... haulted... delivery... (you get the point) that it sounds like an impersonation of William Shatner. Whether the characters are experiencing a truly emotional moment, or merely describing the setting of a room, the delivery is exceedingly dramatic.

3) Lastly, what accent or dialect does Lugh have? The “g’s” of words ending in “ing” are left off sporadically making it sound like an attempt at an American Souther dialect. At other times, vowels, such as the “o” in “other”, are given an umlaut making Lugh sound Scottish. Sometimes the “r’s” are hit really hard like an Irish brogue, and sometimes they are dropped like a Brittish or Southern accent.

I wish I could give a better review. I liked the first two books much more despite having a hard time hearing the low whispers of line delivery. It almost seems like this audio booked was rushed to be recorded.

A magical, thrilling, and romantic conclusion to the Darkest Court series, the Iron Crown centers on Lugh, the youngest prince of the Unseelie Winter Court, and Kieran, his longtime companion and protector.

I completely enjoyed their journey from a platonic friendship to a greater love and sexual intimacy, and I loved how they became true equals in the end. They had a truly special relationship that was built on long-standing trust, friendship, and loyalty. From the moment Lugh found Kieran, they were inseparable.

I was fascinated by the pair’s magical abilities, which turned out to be more awesome and important to the main plot than I first thought. And I liked how their partnership was so vital in identifying and defeating the main villain.

I liked how the villain and the princes’ mother Queen Mab were complex and interesting characters as well. And I liked how the brothers came through for each other and their family, while treasuring and fighting for their found families.

I hope the author writes more fantasy m/m romance, because I enjoyed this series very much. John Solo's narration was perfect!

Love the story line and character relations. What a beautiful world. Hope there’s more books in this world to come!

This book had everything

When comparing this book to the others in the series you would think it would have the same abrupt ending. This book does a great job of tying everything together but still showing the growth of the relationships from the past two books. Overall I really enjoyed the book and a series

I’ve enjoyed the series, and this story in particular put a lot of things together that were left unexplained in the previous two, but DAMN these boys are emo af. John Solo’s melancholy narration is the perfect accompaniment to so much ennui and angst, slowly wandering through the dark hallways of their minds, as you watch them ignore every opportunity to turn on the light. It’s almost painful.

The Iron Crown has just made The Darkest Court book series to my favourite books of all time. It is a very well paced, on the edge of my seat reading, with very well developed character arcs.
The fabulous and very precise narrating from John Solo makes it an almost movie like experience. Loved it and very highly recommend it!