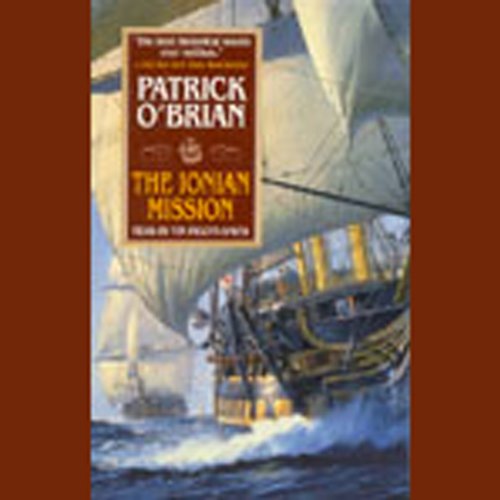 Jack Aubrey and Stephen Maturin, veterans now of many battles, return in this novel to the seas where they first sailed as shipmates. But Jack is now a senior captain commanding a line-of-battle ship in the Royal Navy's blockade of Toulon, and this is a longer, harder, colder war than the dashing frigate actions of his early days. A sudden turn of events takes him and Stephen off on a hazardous mission to the Greek Islands, where all his old skills of seamanship and his proverbial luck when fighting against odds come triumphantly into their own. This is the eighth in O'Brian's 20-volume Aubrey/Maturin series.
©1981 by William Collins Sons, Ltd. (P)2000 Random House, Inc. Random House AudioBooks, A Division of Random House, Inc.

This is abridged. Why anyone would want to listen to O'Brian abridged is beyond me. The joy is the wonderful attention to historical detail and believable dialogue. Search on this title to get the unabridged version. It is read by Patrick Tull; you'll feel like you are there.

Patrick O'Brian created a phenomenon with his 20 novels of the the English navy in the times of the Napoleonic Wars. His historic accuracy has never been matched, and his principal characters in all these books, Capt. Jack Aubrey and ships surgeon Stephen Maturin, bring the era to life. Each book is a story unto itself, but your appreciation is enhanced if you read/listen to each in order written. The character's lives, adventures and misadventures, changing fortunes, evolve subtly throughout the books, as people do when living through events. Some characters are ongoing, others meet their individual fates. The ongoing friendship of Jack and Stepen ties everything together.

The naval battle scenes are exciting, matter of fact and never over done. You smell the smoke, feel the heat of the guns, duck the falling rigging, it's all so vividly described by O'Brian. Not to worry, however, there is room for some romance and wonderful wry humor.

Through this whole series, you'll realistically learn more than you ever thought possible about the lives of sailors of the era between 1805 and 1820 or so, they way they spoke, their history, humor and inevitable problems and occasional triumphs. Each book leaves you a bit in the air at the conclusion, just whetting your appetite for the next.

A combination of elements of several of the books from this series has been made into a movie directed by Peter Weir, starring Russell Crowe as Aubrey, to be released in Nov. 03. Give a listen to the books first, enter their world.

there was no indication that this book was abridged! do your self a favor and get the unabridged version read by Patrick Tull