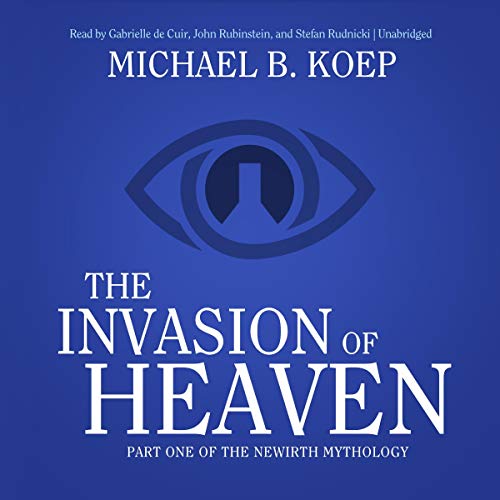 The Invasion of Heaven

The Invasion of Heaven

Psychologist Loche Newirth becomes hunted when he sees a painting that opens a window onto the afterlife. An ancient order of men seeking to control the art pursue him across the world, through centuries, into madness, and beyond. The first part of Michael B. Koep's the Newirth Mythology The Invasion of Heaven is mystery, adventure, myth, betrayal, murder, and madness.

Loche Newirth wonders if it was his fall: The 50-foot drop from the rocky cliff to the icy water below. Is this why he has been hallucinating? Or is it because one of his clients is dead, or his mentor has gone mad, or that his wife is leaving him? He can't bring himself to believe what he has been seeing. Insane things like a massive, searching eye. He sees it in the water below the cliff. He sees it in mirrors, on walls: A massive, crystal blue iris and fathomless pupil there in the center of his life, looking at him.

To find the answer, Loche pens the recent events of his life into a book and leaves the work behind for his mentor Doctor Marcus Rearden to interpret. As Rearden reads he plunges into the harrowing depths of Loche's reality: His loss of a client, the discovery of an unknown past, an ancient conflict over possession of the human condition, the awesome reality of the gods walking among us, and the crimes of humanity invading the hope that lies beyond the grave.

And along the way, Loche tells of unforgettable characters: The torn and manic housewife that teeters on the edge of sanity, and a depressed, swashbuckling swordsman that believes he is over 600 years old, the stoned and prolific painter and his perilous work he must keep secret, and the beautiful business woman that abandons her life's work for a love she never expected.

Good story with a unique angle, and enough turns to avoid predictability. Richly crafted landscapes and interesting cast of characters. Not a huge fan of the multi-performer narration, though not so bad as to ruin the story - just a touch distracting. Looking forward to listening to the next one!

I still struggle a bit when changing readers, since the reader performs all the characters though they are supposedly used to focus a particular main character. Stefan is great! Otherwise, a fantastic story & audiobook!!

that’s it... words fail. though, in the hands of the Author, far from it - they soar from the pages, evoking images of such clarity beauty and yes, terror... I’d binge watch this entire thing in one sitting if it was ever adapted for screen - the Universe conspires : )

Confusing, but beautiful. it never ceased to be captivating, and even when the veil is pulled away, there are always more secrets.

Take a bit to get into but not bad. Could see a few plot twists coming but not all.

I completely enjoyed this book. The story was full of twists and turns and the ending was unexpected. Performances amazing. This is a timeless work of art and proof of the big deep heavy. Or is it?

Overkill on the various narrators

Only needed one narrator. The woman was terrible, mix was bad, the second man was there for what? Rudnicki was great, but the punches were bad. He was the only narrator needed. Production quality, punches, various sonic variations and bad mix.

What an excellent book. A little slow to start but absolutely takes off and doesn’t stop. Great twists throughout.

Prepare for some vulgarity, it’s a bit nauseating at times but the plot is worth it. I was very impressed with the charcuterie development and the narrators are the same as in Enders Game. So all and all A+ book.

A slight bit hard to follow, though the different narrators make it easier. A deep mind bending story, something to pay extra attention to! Overall a great read!